Singer Neha Kakkar, the voice behind popular songs like Dilbar, Jinke Liye, Saki Saki, Mile Ho Tum Humko and Yaad Piya Ki Aane Lagi, is on the second position in the list of Most Viewed Female Artist on YouTube 2019.

With 4.5 billion views, Neha comes just after Cardi B who has recorded 4.8 billion views. But the Indian singer has surpassed international celebs like Ariana Grande and Selena Gomez in the list of 'Most Viewed Female Artist' on YouTube for 2019.

"This is such great news during this lockdown time. I am extremely overwhelmed and can't thank my fans enough for their unconditional love. It's all because of them," says the singer.

Neha has outrun even popular international artistes such Nicki Minaj (2.9 billion views) and Billie Eilish (3.2 billion views) with the unprecedented number of views on YouTube. 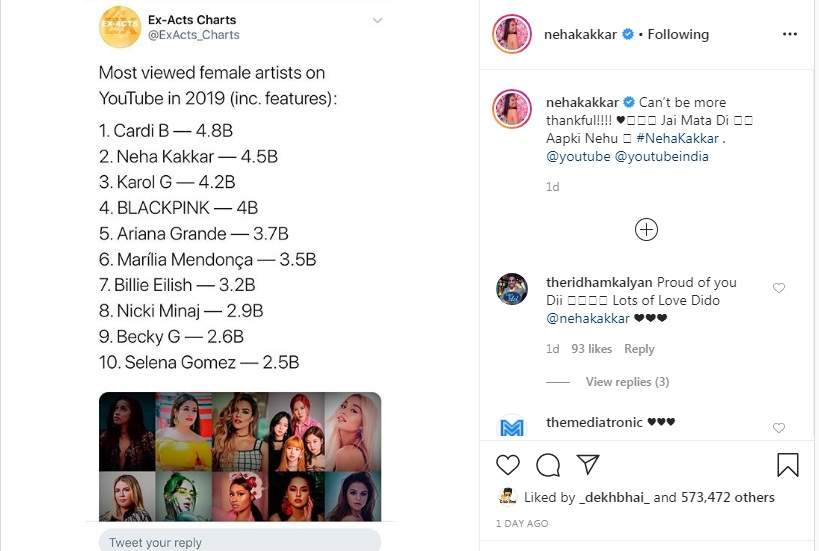 The singer's latest songs Jinke Liye and Moscow Mashuka went on to become chartbusters in no time. Not just her singing talent, Neha's fashion sense and engaging skill on social media have made her the only Indian female singer with more than 37 million followers on Instagram.

In an exclusive interview, Neha speaks to Indulge about her achievements and journey so far:

Tell us about Jinke Liye and Moscow Mashuka... What prompted you to work on these tracks? What was the idea behind it?
Jinke Liye is extremely different from what I have done earlier. Also, Jaani is one of the best writers we have today. Both Mr Bhushan Kumar and Jaani wanted me to sing and feature in the video. They felt I could do full justice to the track. So I was extremely excited about this venture. As for Moscow Mashuka it is Yo Yo's song and I can never say no to him. He has given me my career's biggest hits like Sunny Sunny, Manali Trance and Aao Raja. Whenever he comes to me with a song I don't question him because whatever he makes is always the best.

Your following on Instagram has touched 37 million... What are your thoughts?
I thank my fans who have showered unconditional love. I love them equally. I am so touched and thank them from the bottom of my heart. It feels really awesome to know that I am the most followed Indian artist on Instagram and I feel I'm living a dream. It's unbelievable!

A few singers have done virtual jams and performances... What are you planning? Anything in store?
There is a huge surprise for all my fans who watch Indian television. Can't reveal much right now. So wait and watch.

How has the lockdown impacted your work and daily life?
All shoots, live concerts and reality TV has stalled indefinitely. So as of now staying at home, social distancing is the way. But nothing can stop a creative person from showing his or her talent in these tough times. However, even during this lockdown I am going to surprise everyone with something interesting I am working on currently.

You are an ace when it comes to stage performances and concerts... Do you prefer that to studio recordings?
Both have their own highs. For a singer, it is important to do both. To create content one has to record first and then perform live on stage. So both are equally important and related.

One person who you will always remember who helped you reach where you are…
My biggest inspiration is my sister Sonu Kakkar.  It's because of her that I actually became a singer. As for making it so big, my brother Tony has helped me reach where I am today. I love and respect them more than anyone in this world. And without my parents support this wouldn't have been possible.

What next for Neha in life and professional front?
Wait and watch. Some new films songs, new independent tracks and maybe a new TV show in the pipeline.