Evanescence's Amy Lee talks struggle with identity, finding their sound as a band and what to expect from the new album

Amy Lee is no longer tethered to the past. It’s taken the front-woman of Evanescence some years now to find her perspective, but by her own accord, she now tends to “gravitate less toward melodrama than I did in our early days.” For the singer/songwriter, the last year has been that of introspection and change — ‘breaking old habits that she formed over the years’ (in terms of writing and performance). Talking to her fans on a Reddit discussion board, the singer had said, “You get into a way where you say this is what works for me. This is the formula...this where I sit, this is what I do and that makes you lean towards the same things. It makes you sound the same, which can be frustrating.” And this shift couldn’t be more apparent on the first single from their upcoming album, The Bitter Truth.

Survival instincts
The song, Wasted On You, takes bold new steps by embracing electronic melodies and beat-driven passages along with Evanescence’s signature sound. Yet, more importantly, the evolution that is apparent is that the singer no longer holds singular attention in the song’s music video — a trademark that fans have grown to expect from them over the years. It instead transcends from being something that is a personal project to a piece that is cohesively Evanescence. “I struggled with the answer to that idea for a while. I’m at a point now in my life and career where I feel like I really have perspective. I can see the whole picture now. I know who I am and who we are and where we’ve been and I’m very proud to be where we are today,” offers Amy Lee.

Thrust into the limelight at the age of 21, the singer’s career took off in 2003 with the overwhelming success of Evanescence’s breakthrough single Bring Me To Life. Although the Arkansas outfit was neither the biggest innovator within the symphonic/goth metal movement nor the first to play the style of music, as the only group from the genre to make it onto the radio and popular music channels, they paved the way for bands fronted by female vocalists to break into the mainstream. “It’s funny when you think about it in terms of identity — Fallen was our most famous album, so the image that people have in their heads is of me at that time. That’s who you are for eternity for some people.”

While this experience has caused the band to often revisit older hits like My Immortal, Lithium and even Bring Me to Life, over the years, Amy assures us that The Bitter Truth marks their first fully original album — in nine years. “Themes of disillusionment, new perspectives and a new fire for the fight are evident throughout the album. It’s been about growing up and realising that fairytales aren’t real. Things happen. There is no magic castle in the end. But there is a choice to be able to accept it and live with it or give up. But my choice is definitely to accept the bill and live in the moment,” says the singer.

However, despite this newly found vigour and enthusiasm to explore new sonic terrain, the album will not abandon the core sound of the group. “We’re hoping to launch our sound to a level that couldn’t have existed with the band when it started. I would never make a new album if I didn’t hope that something about it was better than anything we’d done before.” Treading new territory, unlike their 2017 album Synthesis that documented the group’s evolving soundscape, The Bitter Truth attempts to highlight every element that makes up the band’s sound. “With this album, we are offering a full palate. One of the things we were aiming at was taking apart the individual elements of what our sound may be, and give each of them their own space to shine,” explains Amy, speaking about the record that she calls, “A deconstructed Evanescence”. Having released the first song even before the completion of the album — ‘with only a third of it mixed and mastered’ — we learn from ongoing conversations that the musician has with her fans that some songs may not have strings, while others may be electronic or completely be orchestral space. “We have a pile of unfinished songs and are working remotely for the second round of recording. We are literally, at this moment, listening to our songs with the fans and that never happens. To release something we only wrote a couple of months ago is wild!” 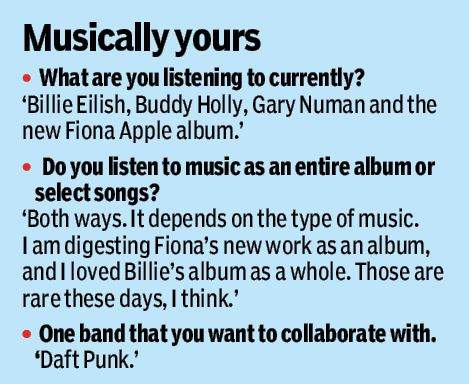 Wasted On You premiered on Vh1 India on April 23 and is streaming on all leading online platforms.