Zahrad on stage: Into the mind of the woman cleaning lentils

If you want an example of how a complex theme can be portrayed with simple short words and sentences, look no further than Armenian poet Zahrad’s A Woman Cleaning Lentils. The poem describes various thoughts that go through the mind of a woman who tries to find a sliver of distraction in her mundane daily routines. This Saturday, at Adishakti, a similar premise will be portrayed through a stage adaptation of the poem called Lentils and Stones, a theatrical puppetry and dance performance directed by Vijay Ravikumar and his team of thespians, dancers, textile designers, musicians, and mathematicians. Having first come together last September for Perch’s Take Flight programme, the team (including Abhaydev Praful, Aditi Bheda, Bhagirathy, Devika Mohan, Madhushree Basu, Parvathy and Pranav Sreerag) is back again with this adaptation that describes the daily life of a woman whose mind wanders into unexpected places. Excerpts from a chat with Vijay

What was the inspiration behind this production?

Besides Zahrad’s poem, I have also been inspired by grandmother, noticing the past worlds we carry within ourselves with their uneasy relation to the present. This, and the tussle between the past and present over who gets to have the final word. Living with my grandmother over the past five years, I’ve been struck by the disproportionate number of stories that come from her childhood, and by how vividly my grandmother recounts and draws sustenance from these tales that bubble forth when least expected. On the other hand, that childhood comes to an abrupt end at the age of 12 when she is married off, and the vast majority of the life that follows is reminisced about in a very different way, usually in relation to the domestic work she was engaged in. At times the work feels like a kind of slavery, especially in the earlier stages of moving into her husband’s large joint family. But the work eventually becomes an everyday reality that is accepted. And in a world where the pace of social, political, and environmental change evade our capacity to keep up, her memory of that work provides a conflicted sense of comfort.

What about the poem fascinated you?

I think I just fell in love with the poem after a friend of mine read it out loud a few too many times. But more specifically, the world of the poem is not our world, in the same way, that the twisted world puppets inhabit is more of a comment on our own. The poem’s imagery is quite limited, and it’s literally what’s between the lines that are so potent. The reader has to fill in all the gaps — the backstory and everything — so the poem is more of a scaffold, which is perhaps why it feels so universal.

But you can’t imagine a real person saying these lines, or thinking these thoughts — it feels too general, and somehow too distilled. This is where puppetry becomes a powerful medium for me, by giving a physical life to such general themes, while still leaving room for the viewer’s imagination to root it all in specific experiences. I wanted to expand the poem into a performance with puppetry, in order to create a universe from which themes of the poem (which coincide with themes I’ve observed in my grandmother’s life) could be explored. 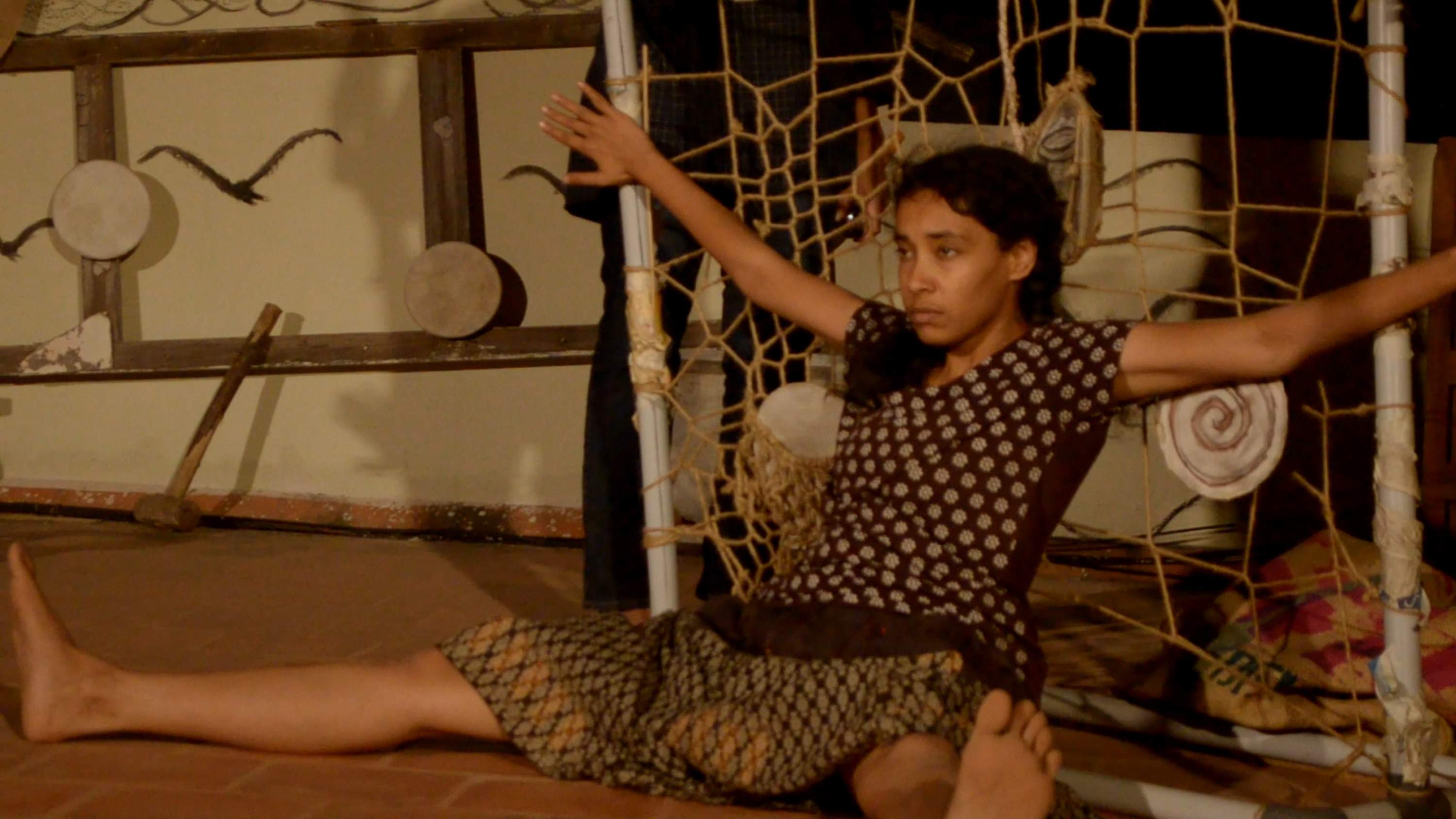 What kind of dialogues and music can we expect?

There are two speaking characters in the play — the old woman and the television. All the dialogues are between them, but they are mostly talking past each other. It is not even clear that the old woman can hear the television when it speaks, though sometimes its words seem to have an impact. Thus, some of the dialogues have the feeling of a dinner conversation in which people take turns following threads of thought in their own heads. Sometimes they respond to each other without realising it, but it is not a conversation as such. The music is performed live by composer Abhaydev Praful. The score is fairly minimal, reflecting a certain level of monotony in the world of the play.

Describe the costumes and the set.

The set of the play is mostly fixed, though the various elements do move to different parts of the stage as the play progresses. When the play begins, a large life-size puppet of an old woman is visible near the center of the stage, sorting invisible lentils from atop a set of bogi drums. A puppeteer sits discreetly behind her — the puppets’ legs are mounted on the puppeteers’. They are capable of moving, and at times dancing. Just next to the puppet is a stand with a large telephone, made of cardboard. To the right of the puppet, further backstage is a wall made of jute and pipe, with various bogi drums attached to it, beneath which sleeps the Memory (this is a non-speaking role, played by a dancer). To the left of the old woman, sits the ‘television’. It is played by a third performer, wearing a large cardboard TV with a binder of hand-drawn images that can be flipped down. These three performers are visible on stage at all times. The set, art, and the puppets were created by Pranav Sreerag, a textile designer and installation artist based in Chennai. The TV has a series of around twenty images that it displays over the course of the play — these were created by Parvathy, a graphic illustrator who is based in Chennai.

Although the piece involves puppetry, the target audience is adults and teenagers. Children are welcome to watch it — and many kids have enjoyed it — but the piece was created with an adult audience in mind.

Will we see the production in other cities soon?

I hope so! The piece is still evolving, and I still consider it a work in progress. But we would like to do a proper run later in Chennai and Bengaluru, and perhaps other cities as well. 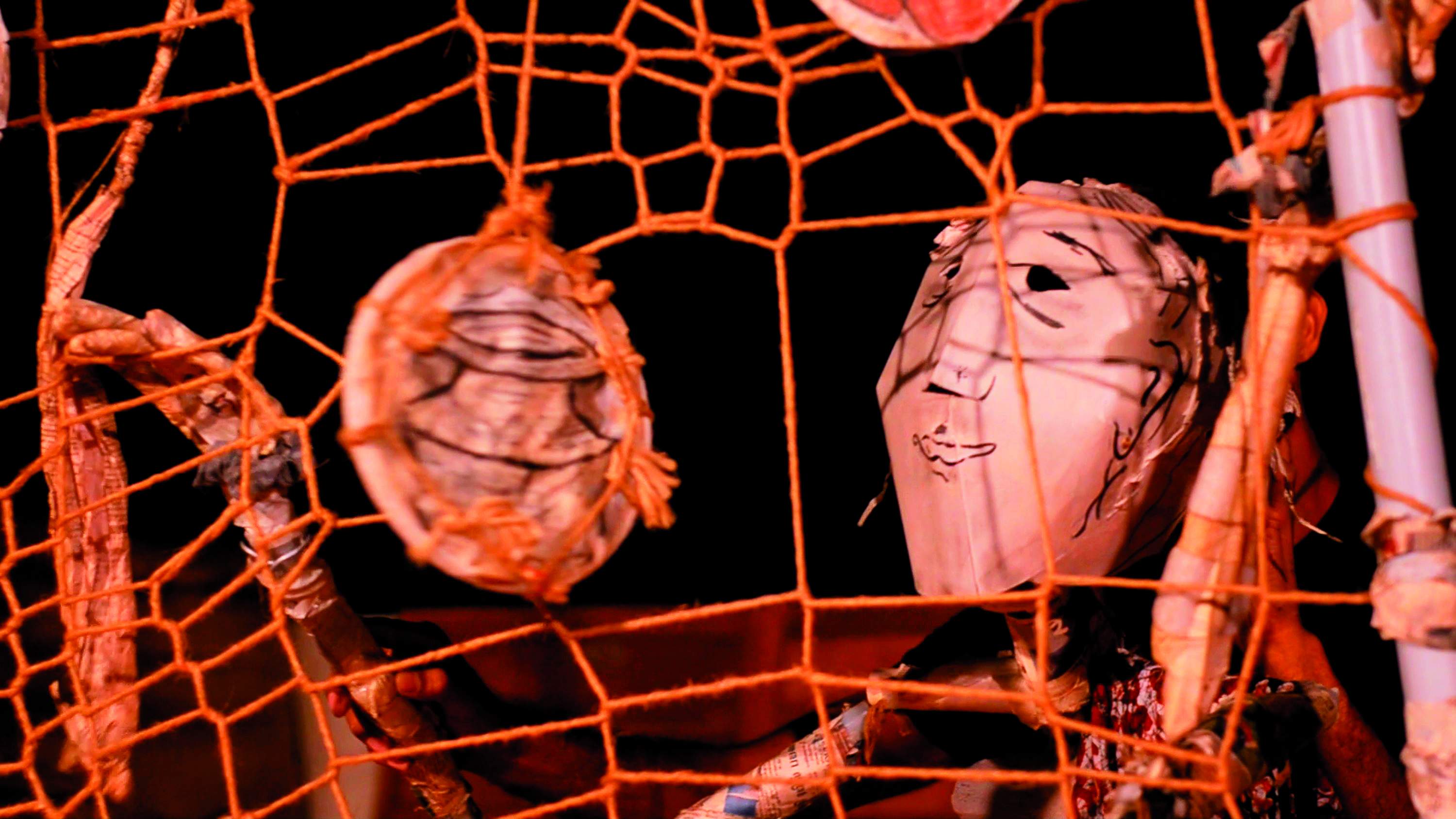