Five-time Grammy winner Billie Eilish blessed her fans with some brand new music this week as she debuted a slick animated video for her new single 'my future', and fans have reason to believe that the music video is an homage to Japanese animation company Studio Ghibli’s style of work. In fact, last year Billie had revealed that she was a huge fan of Hayao Miyazaki’s filmography, who founded Studio Ghibli.

During an interview Billie had explained how Ghibli’s work has often inspired her own work, particularly in conceiving her sleeper hit, When We Fall Asleep, Where Do We Go. She also talked about how it affected her songwriter brother Finneas. “I feel like I owe most of it to Spirited Away and Miyazaki, just the way all that animation is. Like No-Face in Spirited Away, oh my god. Also My Neighbor Totoro, I owe so much to Miyazaki, it’s all just so weird and unrealistic bu realistic. When Finneas saw Spirited Away, he was so scared from the parents turning into pigs scene, that he had to go to therapy for a year,” Billie had revealed. 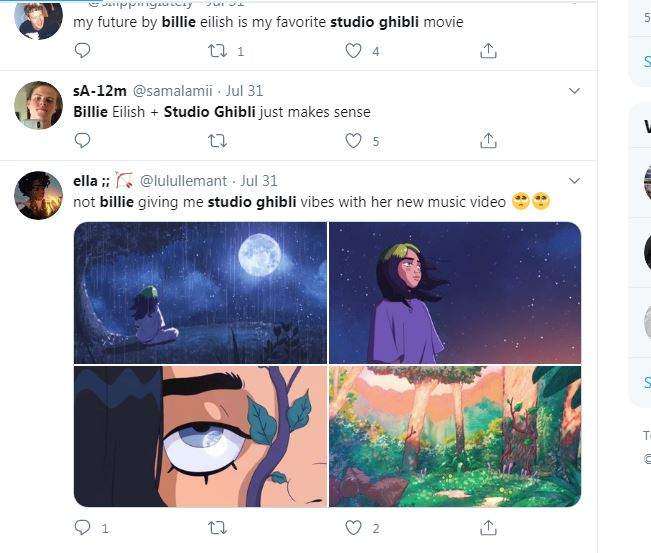 In the video for 'my future', there are distinct detailing and aesthetic influences which can be traced back to Billie’s love for the Ghibli school of animation, especially in the depiction of nature and the overlapping motifs. The video unravels like a cross between My Neighbor Totoro and Nausicaä of the Valley of the Wind.  Billie revealed to fans in an email that the song was written by her in the beginning of the quarantine, and was very personal to her.

“We wrote this at the very beginning of quarantine. It’s a song that’s really really personal and special to me. When we wrote this song, it was exactly where my head was at – hopeful, excited and a crazy amount of self reflection and self growth. But recently it has also taken on a lot of new meaning in the context of what’s happening in the world now. I hope you can all find meaning in it for yourselves,” she wrote.