It's official: Casting has begun for the final and most anticipated final seasons of the Netflix drama The Crown. The award-winning show which chronicles the life of Queen Elizabeth II from the forties to the current times, has cast Tenet star Elizabeth Debicki to star as Princess Diana in Seasons 5 and 6 of the show. The final two series will have a huge focus on the troubled relationship between Princess Diana and Prince Charles' marriage, leading up to Diana's tragic death in 1997. The season may also go on to cover the deaths of Elizabeth's sister Princess Margaret and the Queen Mother in 2002. 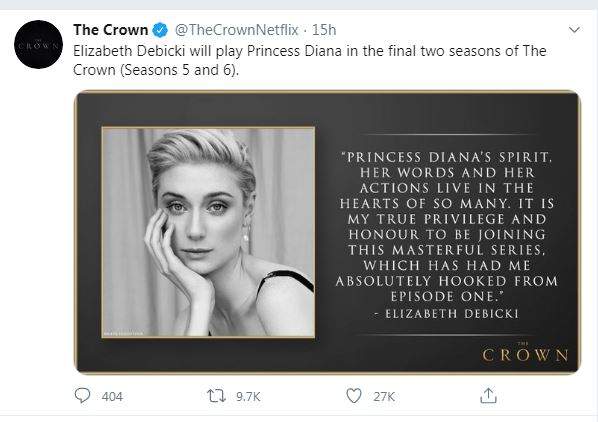 The show is expected to return with its fourth season in November this year, and will feature Olivia Coleman as Elizabeth and Emma Corrin as a young Princess Diana. “Princess Diana’s spirit, her words and her actions live in the hearts of so many. It is my true privilege and honour to be joining this masterful series, which has had me absolutely hooked from episode one," Debicki said in a statement which was release on the show's official Twitter accont.

Earlier this week, it was announced that Game of Thrones star Jonathan Pryce will play the role of Prince Philip in seasons four and five; the role was earlier played by Matt Smith and Tobias Menzies. Meanwhile Harry Potter star Imelda Staunton, will take over over from Olivia Colman as Elizabeth, while Lesley Manville will play Princess Margaret.