Hasan Minhaj's pathbreaking show Patriot Act has been cancelled by Netflix after six seasons, much to the disappointment of fans the world over. The show which premiered in October 2018 and released 39 episodes, aired its final episode in June this year. The Patriot Act was lauded for its comedy news show format which explored crucial and relevant issues from Indian elections, to obesity in America and even the realities of wealth inequalities the world over. 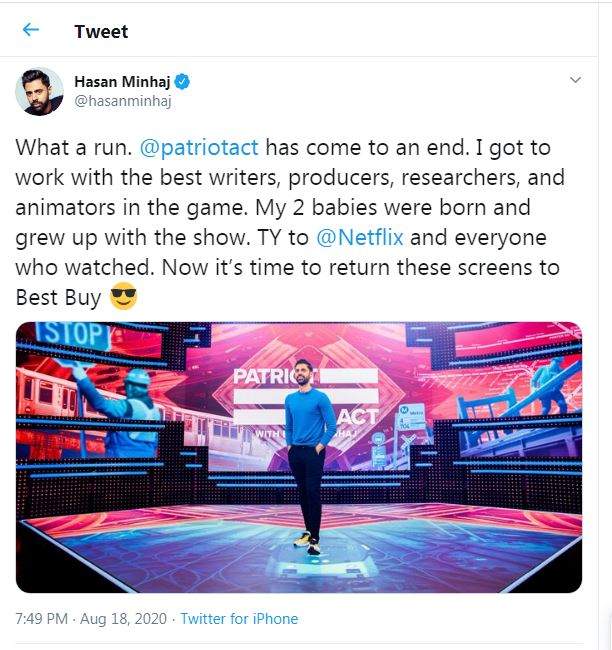 Hasan Minhaj himself took to Twitter recently to address the cancellation. "What a run. @patriotact has come to an end. I got to work with the best writers, producers, researchers, and animators in the game. My 2 babies were born and grew up with the show. TY to @Netflix and everyone who watched. Now it’s time to return these screens to Best Buy," Minhaj tweeted.

In 2019, the comedy news series found some trouble as Netflix pulled back an episode from streaming in Saudi Arabia after allegations that Minhaj's show was critical of Crown Prince Mohammed bin Salman and his alleged role in the death of journalist Jamal Khashoggi, and Minhaj had even criticised Netflix's move. That same year, in fact, the show won an Emmy for outstanding motion design and a Peabody Award. This is not the first time Netflix has cancelled comedy/ talk series starring comedians; in the past the streaming service has canceled shows like 'The Break With Michelle Wolf,' 'The Joel McHale Show With Joel McHale' and 'Chelsea,' featuring comedian Chelsea Handler.