Are virtual film festivals key to pushing through the onslaught of cultural unpredictability? It’s certainly a massive face-saver in a pandemic-riddled year, what with a burgeoning streaming circuit. But what anchors this shift and more importantly, could this be a permanent fix?

Permaculturist and sustainability expert Kunal Khanna planned the first-edition of the All Living Things Environmental Film festival in the lush plateaus of Panchgani where he runs his permaculture farm The Odd Gumnut; it was envisioned as a spirited summit where environmental filmmakers, creators, thinkers could interface for a meaningful exchange about the many facets of climate crisis. But then global pandemic hit, and things had to move to a digital-only format.

“It took us one full year to plan this and get it ready on time. I remember I first spoke to my co-founder Marie Luise Schega about this in November last year, on my birthday. She had called me up to wish me and that’s when I first uttered this idea to her and it was not long after that I spoke to my other two co-founders and by December we were all game. By January we had started work but we had to rethink everything during March-April for obvious reasons,” Khanna tells us.

The film festival, scheduled to be held between December 5-13 will screen 33 films from all over the globe, including shorts and feature-length outings. Khanna and team have come up with a convenient streaming pass system for festival ‘goers’ and did it all with the help of a tireless remote team of volunteers.

There are also a line of filmmaking masterclasses, productive panel discussions and workshops, just like many run-off-the-mill festivals. But unlike Busan, Sundance or Cannes, this is first-time, DIY effort on a limited budget. What are the labours behind setting up a film festival with a remote team in under a year, that too for its very first edition? Are local community-building and soft launches set to replace glitzy red carpets? We asked Khanna to help us gain perspective on what could very well be the future for mainstream festival culture:

ALT EFF was conceived as a regular, physical festival in Panchgani…

Yes that’s how we were planning our first edition, the idea was to make it into an annual thing so Panchgani could be the confluence of interesting ideas, and make it into a hub of sustainability. But for the pandemic we obviously had to move things to a solely virtual level. Although next year, we are hoping to go for a regular festival-goer’s experience if things go well.

I moved here from Australia a couple of years back, where I lived for about 13 years and worked at some film festivals; my background is in environmental sustainability. There’s of course, a lack of understanding regarding the environmental problems that exist around us, more so about the solutions that can be devised on a functional level. Film, I think, is a really powerful medium not only is it engaging but it’s also effective in putting a message across.

The environmental film industry is growing rapidly, there are some incredible films that are coming out, even on OTT platforms which are focusing on a diverse set of issues. The greater vision was to make this into an annual conference which could attract people every year and we started to push forward this design, for a sustainability summit kind of a thing which could bring about broader changes.  Luckily, the two other co-founders are also from Panchgani. Neha Shrestha and Rudransh Mathur who run a design agency here called Network of Creative Thinkers, their background happens to be in film as well, so it was a very good alignment.

Tell us about the films...

There are 33 films, and like any other festivals we used a platform called FilmFreeway where filmmakers can submit their films to various festivals based on categories. We got around a hundred submissions from around the world, our programming team watched all the films and there was a pretty intense deliberation process to shortlist the 33 films which made the cut, based on different factors, like diversity to urgency of the issue to story-telling, technical aspects etc. 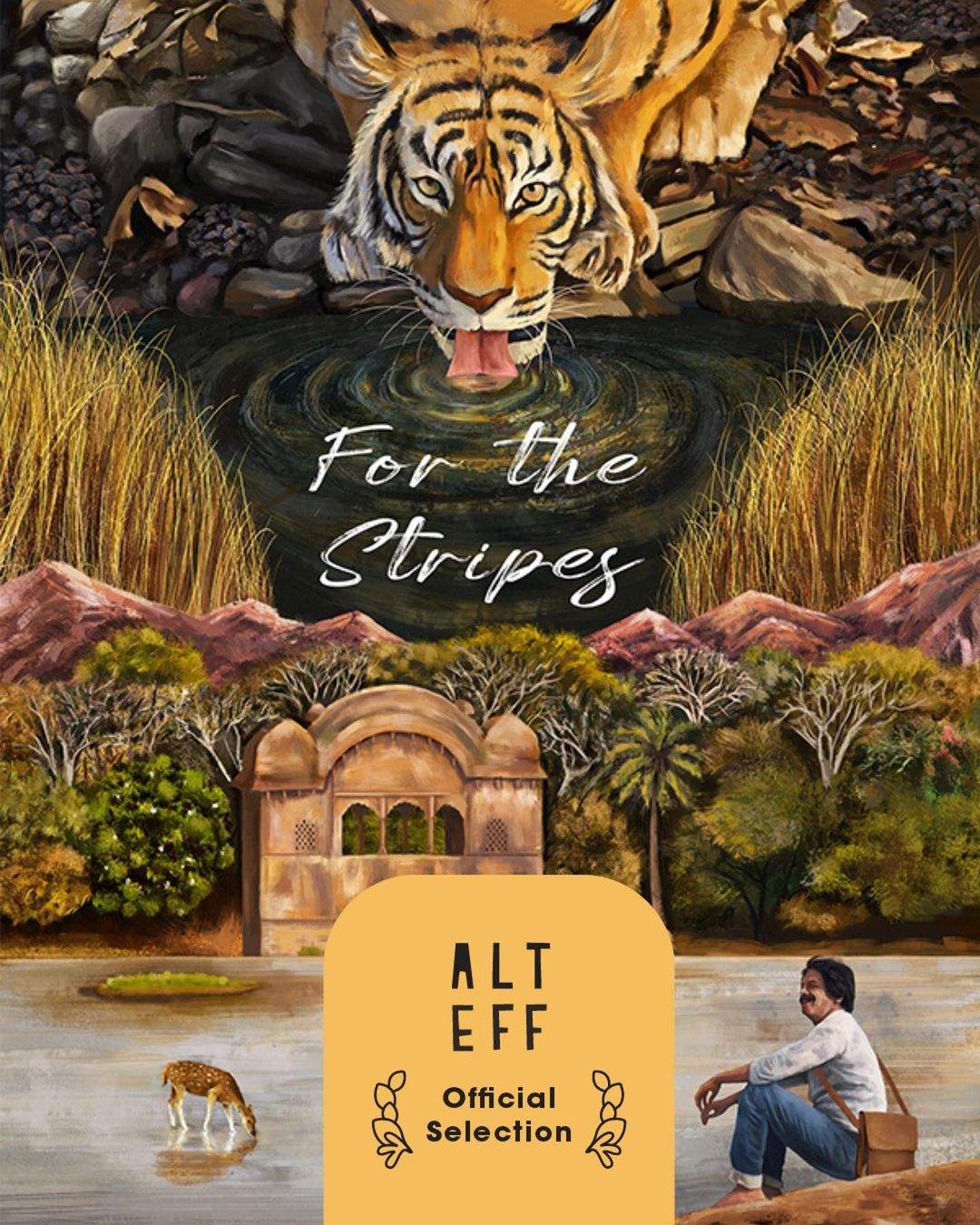 They were sectioned into four categories, Indian shorts, International shorts, Indian features and International Features. There’s also a cash award for each of these categories. We have a six-member jury who picked the winners, there’s a fifth award as well which is a special jury mention.

How does the virtual festival screening work?

Think of it like a limited edition Netflix, for which you need to book tickets. You can stream as many films as you want during this time. We have also created this thing called an Escapade - there are four separate escapade experiences, each consists of nine or ten films picked by our programming team. If you buy one escapade you get access to these sets of films. There are also single film passes and all-festival passes so you can choose your festival experience. You just need to pre-book your tickets and logon to our virtual festival site between December 5-13 and you get to stream whatever you choose whenever you want before 13th.

You put this together with very few people...

Yes, we are a team of 14 people, all volunteers, all working remotely across Goa, Mumbai, Pune, Delhi and other parts of India, Europe and UK. Our fourth co-founder Marie is from Germany

Tell us about the challenges of setting up a film festival with a remote team?

I think one big challenge was that the whole team has never been together ever, they’ve never met each other. So we put a lot of efforts into these virtual socials. Usually when you’re coming up with something of this scale, you talk outside of work, you go out for drinks or dinners. So, building the rapport was crucial to our process. Technically, it’s possible, of course, but emotionally it takes some work to establish a connection. Plus, it’s a Covid year and sponsorships were difficult to get, our budget was smaller since it’s a virtual festival. 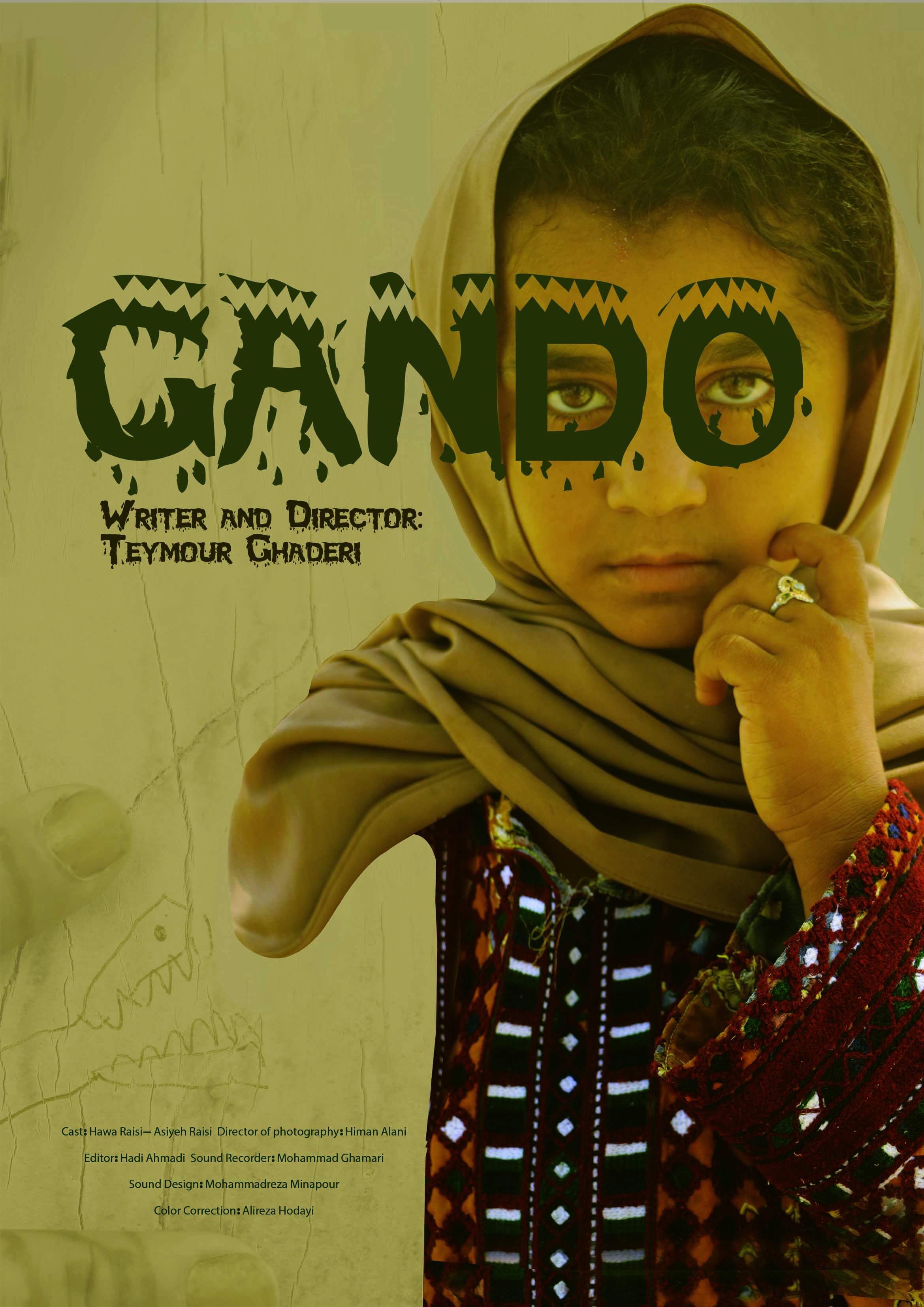 The other challenge is that everyone is a volunteer, they all have paid jobs. Time management and availability was an issue but that’s common for any volunteer-run thing; we have an international team and jury members. So, coordinating timings and coming up with a convenient time for everyone to meet becomes a bit of a task when everything’s virtual. But the beauty of this cause is that it kept us together, because everyone is very passionate about this issue.

Expert Speak (by ambassadors and co-founders)

It is really exciting. I’m waiting to see what type of films are in the festival. Films are such a powerful medium to express your feelings for the future, for the next generation, for our children. It is a loan taken from them, [of] the soil, the water, the seeds, and we contaminate them. It is nice that so many people are thinking alike about environmental restoration, I am very happy to be part of this team. Good luck to the team at ALT EFF and the filmmakers that will be able to showcase their feelings through their art.

Festivals like ALT EFF, play a crucial role in communicating and sensitising people, and guide them to care for the environment through films. It is when you see the problem, you understand and learn to respect. It is what you respect, that you love and protect. Environmental festivals like these bring environmental issues to the forefront and offer viable solutions. They motivate us and empower us to take the right step and attempt to make a difference to restore the beauty and sustainability of our only home, this planet we call Earth.

Humans who are just one of all the living things on this planet actually control the fate of every living thing and the planet itself - what we do with this power, can make or break our collective future. ALT EFF is our way of bringing awareness via the powerful medium of film- no matter how much information or research there is in the world, it has no meaning unless it is presented such that people can understand it. Films do that.

Through ALT EFF, we hope to make Panchgani a hub for eco awareness and move the town in the direction of sustainable tourism while retaining and promoting it's natural beauty and unique geography.

In this 2018 wildlife thriller by Susan Scott, two first-time filmmakers venture into the frontlines in South Africa's national park and investigate the murky world of rhino horn trade and consumption. 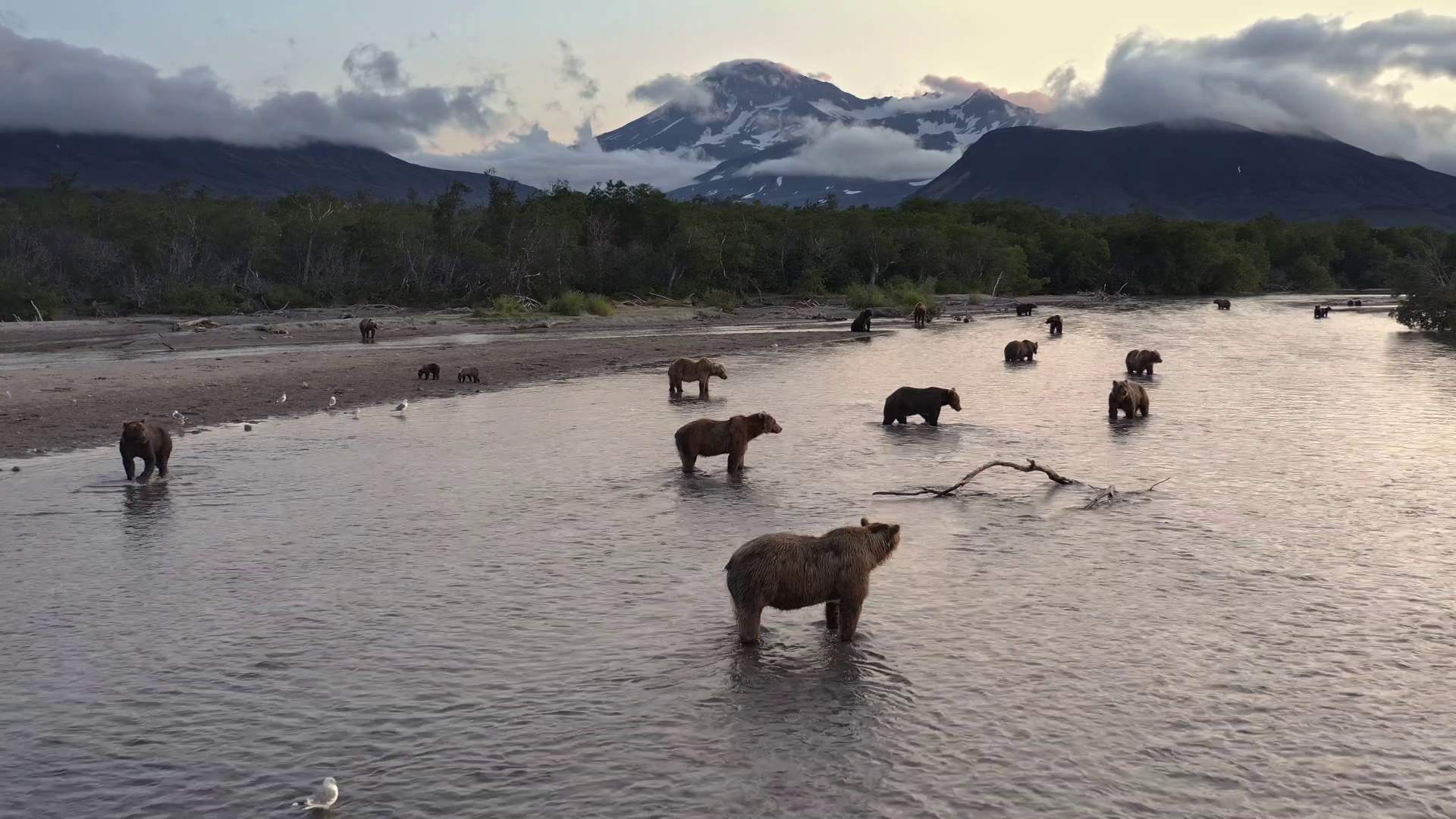 A 2020 documentary by Dmitry Shpilenok, Vladislav Grishin about sockeye, a species of Pacific salmon - that is seemingly an inexhaustible resource. But since it has already been identified as one, how long till the species turns endangered?

German director Christoph Pohl’s first feature length documentary looks back at the one-of-a-kind afforestation project that started on an eroded desert plateau in the experimental township of Auroville, in the coastal belt of Tamil Nadu. Today, the lush Auroville forest is an impeccable example of eco-restoration that nurtures a kind of tropical forest that is on the verge of extinction globally. Ever Slow Green tells the story of Auroville’s 50-year-old forest through some of the diverse characters who have dedicated their lives to bringing it to fruition.

Elephants In My Backyard

This Vikram Singh documentary follows an Indian conservationist’s efforts to develop a strategy for preservation of elephant habitats that face the risk of eradication. 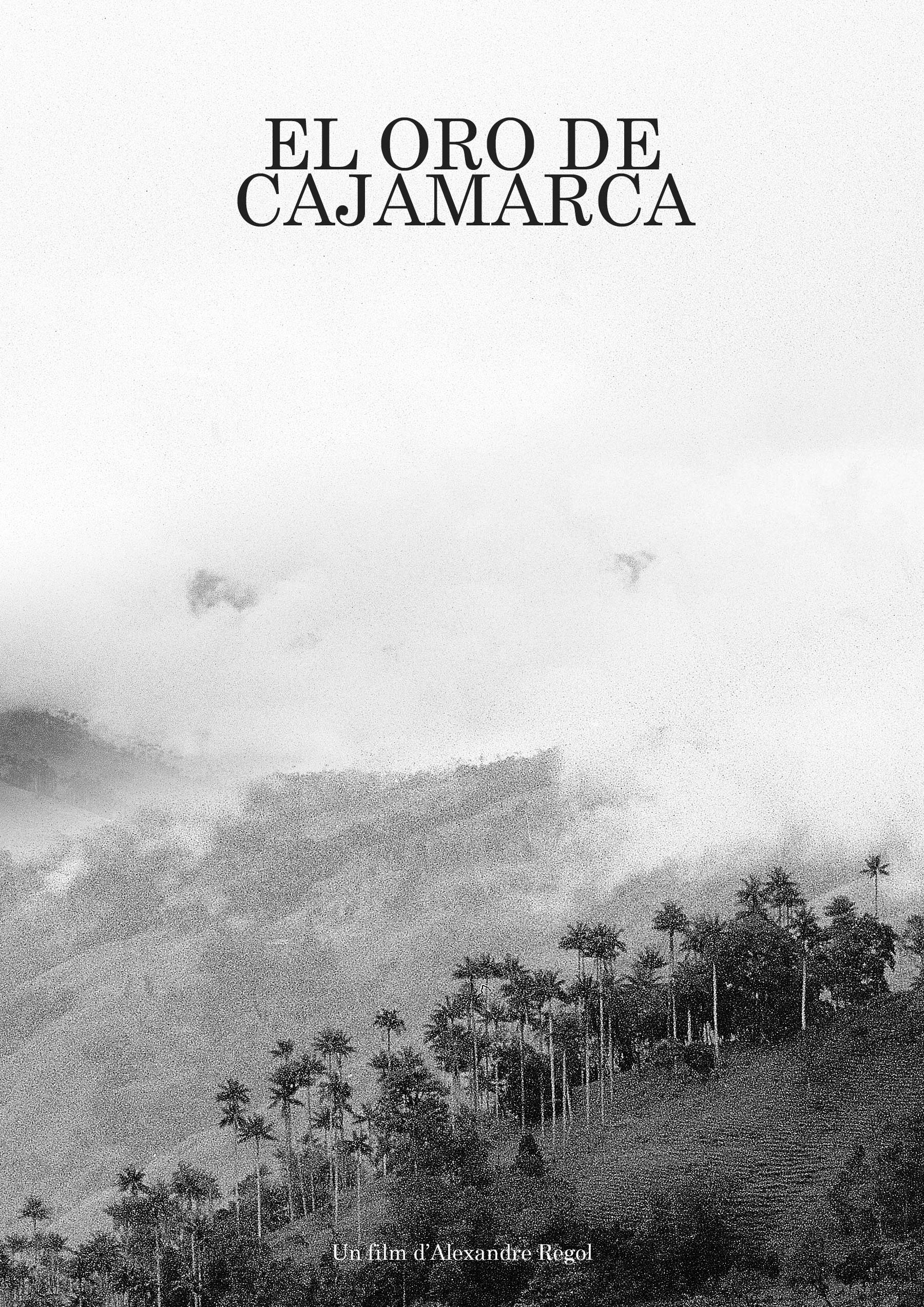 The handcrafted 16mm documentary examines one of Colombia’s biggest open-sky gold-mine projects and is essentially an exploration of Tolima’s green mountains in the Colombian Andes where a gold resource has the potential of changing the world.

Mihir Godbole, Makarand Dambhare’s film follows a group of nature enthusiasts and photographers, who have a chance encounter with of a pack of Canis lupus in 2009, that is an elusive grassland predator, Schedule 1 Species protected under Wild Life (Protection) Act, 1972. This film was created with the sole aim of creating awareness about the astonishing wildlife diversity that thrives just 30 minutes away from Pune and also the myriad threats that endanger this ecosystem. 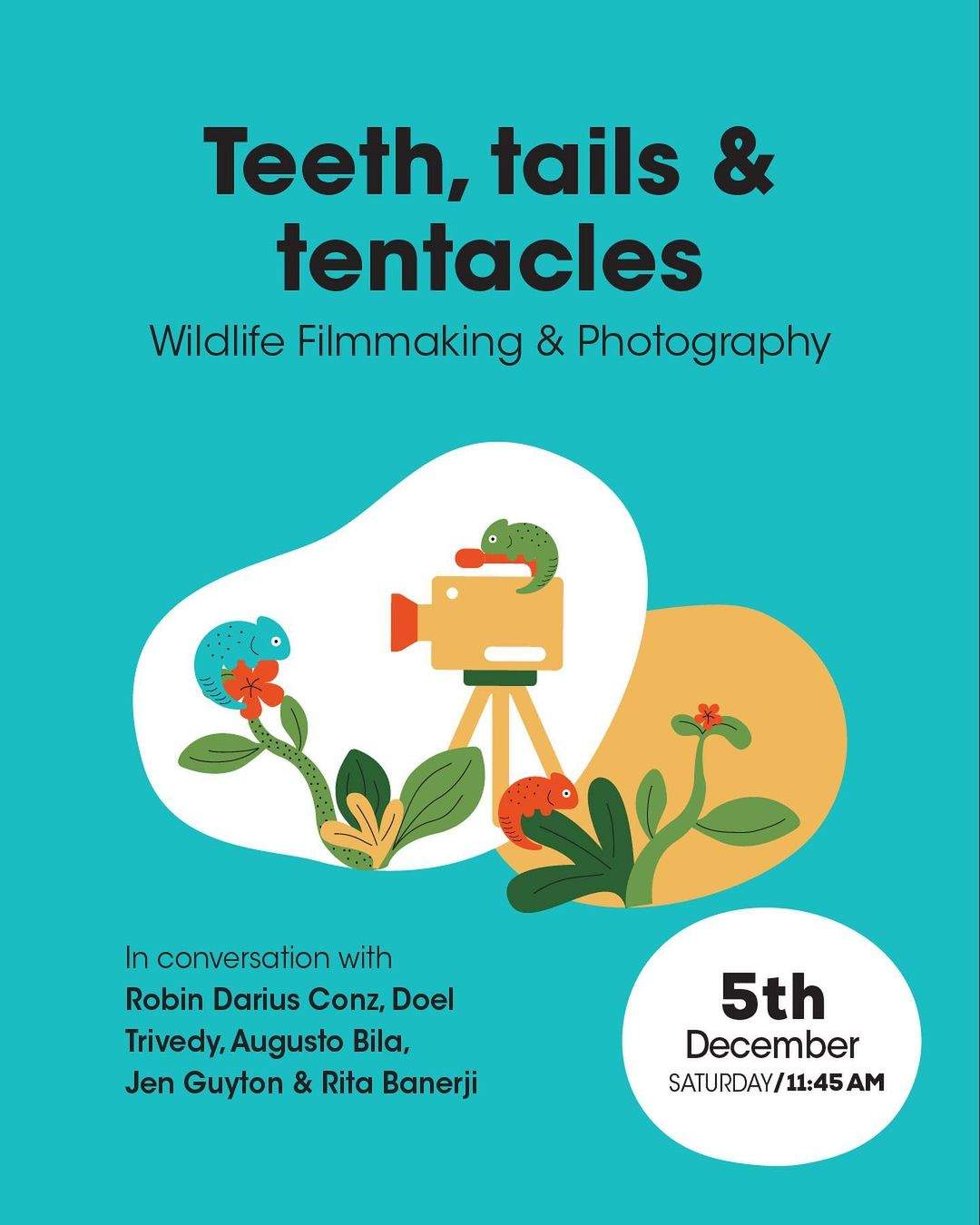 Nature, Camera, Action, December 5: A mini film-making masterclass by natural history filmmaker Gunjan Menon and visual artist Pooja Gupta, talk about what goes on behind the lens while tigers are posing in front of it