Kim Kardashian West has finally broken her silence on Kanye West's mental health. In the last few days, Kanye, who's running a presidential campaign for next year has had quite a few Twitter meltdowns where he called out his wife Kim and mum-in-law Kris Jenner for trying to 'lock him up with a doctor.' The rapper also made several other allegations against Kim on Twitter and talked about ending their relationship, but later deleted those tweets. He also had an emotional meltdown in his first campaign rally in South Carolina. Kim recently opened up on her Instagram stories to talk about Kanye's bi-polar disorder and to address claims about his mental health. "As many of you know, Kanye has bi-polar disorder. Anyone who has this or has a loved one in their life who does, knows how incredibly complicated and painful it is to understand. I’ve never spoken publicly about how this has affected us at home because I am very protective of our children and Kanye’s right to privacy when it come to his health. But today, I feel like I should comment on it because of the stigma and misconceptions about mental health," Kim wrote on Instagram. 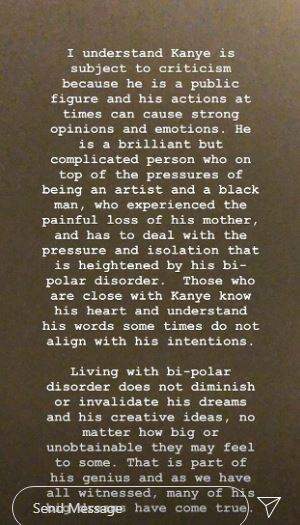 The beauty moghul and reality star also stated that living with bi-polar disorder does not invalidate his dreams or ambitions. "Those that understand mental illness or even compulsive behavior know that the family is powerless unless the member is a minor. People who are unaware or far removed from this experience can be judgmental and not understand that the individual themselves have to engage in the process of getting help no matter how hard family and friends try," Kim said on Instagram. She ended the note with a plea to media and the public to be empathetic to the situation so they can get through this.