Veteran actor Soumitra Chatterjee passed away this morning in Kolkata following COVID-19 complications at the age of 85. An official statement from the hospital read, “We declare with heavy heart that Shri Soumitra Chattopadhyay breathed his last at 12:15 pm at Belle Vue Clinic today. We pay our homage to his soul.”

The thespian was admitted to a private hospital in Kolkata on October 6 after testing positive for COVID-19. Though he eventually tested negative for the infection but COVID- 19 encephalopathy set in and various other complications followed. His tragic death is being mourned by the industry, specifically his peers.

Rituparna Sengupta who had worked with him in many films, tearfully remembered the legend. "I've been learning from him for years now, ever since I started work in the industry around 25 years back, I don't think anyone was quite as learned as him. When I was a newcomer I had done this film called Shesh Chithi with Soumitra kaku and Tanuja, I was obviously nervous. Soumitra kaku was younger then, and later when I worked with him I would tell him that I've never seen a better looking man than him in my life. And he would wear these colourful shirts and I would jokingly ask him which of his girlfriends gave it to him," Sengupta shared.

"He had such a great sense of humor, we had a beautiful relationship, he would laugh and make others laugh. He would recite on set, there are too many memories with him. Our film Bela Shuru will release in a few days and I have such an incredible scene with him, I play his daughter. He was a truly global icon but loved Bengal and our culture the most," she added.

Swatilekha Sengupta, who will be seen in Belashuru with the late actor also expressed her condolences. "I don't know what to say right now. I'd been lucky enough to do three films with him, but I didn't just know him as an actor. He was a people's artiste, he could write, he could recite, he was an unparalleled thespian, he loved addas, we would spend hours talking and laughing together," she recalled.

Filmmaker Raj Chakrabarty mourned the loss of the icon on Twitter. "A great loss for Bangla Cinema; the demise of the legend, Shri Soumitra Chattopadhyay. Rest in peace, you'll live forever in the hearts and household of Bengal," he wrote. Actor Richa Chadha, too expressed her condolences on Twitter. Dev, who worked with Chatterjee recently in the film Sanjhbati reminisced about the thespian on Twitter. 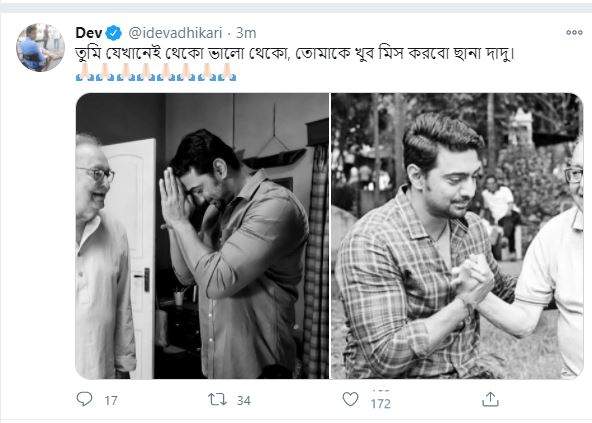 "RIP Soumitra Chatterjee! You live on through your work for eternity! Thank you for the movies. A big, big loss to the world of cinema and art. An era has indeed ended with no one in sight to fill the void," she wrote.

Aparna Sen, who had worked with Chatterjee in innumerable projects, also grieved the actor's death. "I lost a guardian today," she was quoted as saying. Sharmila Tagore, who had also worked with him in several cult films like Aranyer Din Ratri and Apur Sansar, broke down in tears while reminiscing about the late actor. "I remember we spent a lot of time together in North Bengal for Goutam Ghosh's Abar Aranye and it was so lovely. He was so learned and one could learn so much from him, be it about theatre or politics, we would talk for hours. I regret not recording him back then. Everyone from Aranye is now gone... be it Samit, Shubhendu or Kaberi Bose or Manik Da," she shared. My Brother Nikhil director Onir shared a collage of images from Soumitra's biggest hits to remember the late actor and also wrote a touching tribute. 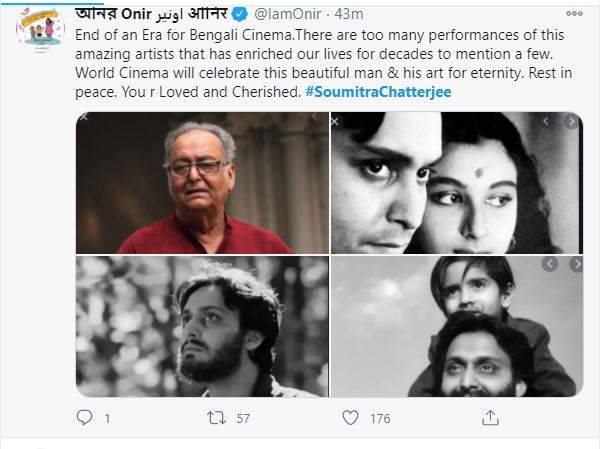 Director Srijit Mukherji took to Twitter to share a black and white picture of the actor with the caption, 'bhalo theko,' which translates to 'keep well.' Arindam Sil writes on Twitter,"Innumerable memories. The legend will forever remain a legend. Sincerest prayers. We are all proud that we knew him and have worked with him."

"Demise of the legend, the King Of Bangla cinema Soumitra chatterjee. It’s end of an Era. He will always remain in our hearts through his immense body of work. Had a fantastic bonding with him. Will miss you!!! #Restinpeacelegend. Folded hands," actor Jeet wrote on Twitter.

Actor Sreenanda Shankar who had recently worked with him in the film Basu Poribar wrote, "What a dark day... what a crazy year! End of an era... Feel so lucky to have worked with you Soumitra jethu. Will always remember how warm and affectionate you were. RIP."