Her biggest hit of 2016-17 Jag Ghoomeya from the film Sultan is still one of the trending tunes on music charts. Neha Bhasin, winner of several awards, also basks in the limelight as a crowd-puller, both on stage and on YouTube.
But it has been a long wait for Neha. In 2002, she was introduced as a member of India’s first girl band, Viva. It has taken 15 years, and a challenging journey for her, to be recognised by the Indian film industry. And, she is glad that things are falling into place. “We all like to say awards don’t matter. I think we get defensive when we don’t win. But once we win, we like it and want it. It’s a sense of validation, a feeling that maybe now I belong here,” says the singer.
We met her in the comfort of her hotel room in Bengaluru. In the city for a private concert, Neha appeared calm and relaxed. The tropical green highlights in her hair, electric blue trousers and white halter neck made her look as stunning as any model on the cover of high fashion magazines. Talking about her career so far, she shares, “Shreya (Ghoshal) and I started at the same time, but our journeys have been very different. First, I was popular, then I wasn’t, now, I am back in the spotlight. It’s humbling now, particularly after both the awards. But before I reached here, I have been all over the place.”
Though it has taken this long for her to be recognised, Neha agrees that audiences and music composers are open to different voices now. Additionally, there were just a few female singers who made an impact. “Back then, when I started, a well-known music director asked me if I had a bad throat (laughs). My voice is different, and the trend was to classify offbeat voices for Western compositions and regular voices for female leads.” 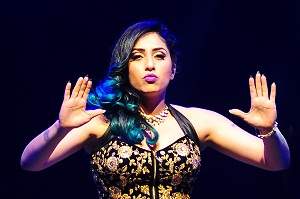 Southward bound
Neha has been fortunate to have found takers in the Southern film industry, where she has sung for Tamil and Telugu films. Her debut song, Sei Yedhavathu Sei from the movie Billa was a huge success. “That was the most memorable song I have ever recorded. I took seven hours… can you imagine! But that recording also got me my next song. Vasanth (film director) heard me and told Yuvan (Shankar Raja, music director) that I would sing in the next film,” she recalls. The film was Satham Podathey, and Neha won the Vijay TV Award for Best Playback Singer (Female) 2007 for the song Pesugiren Pesugiren. “All good things happen when least expected, and I really like the Southern film industry for all it gave me,” she says. 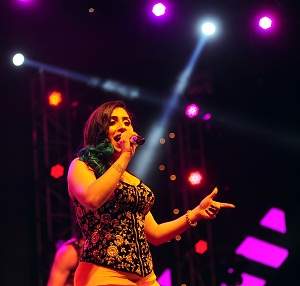 Looking back
Though Neha was a popular name after her debut with Viva, the band’s internal conflicts and eventual collapse deeply impacted Neha’s life and career. It wasn’t something she expected or wanted. “We were too young and successful too soon. It was kind of disorienting. I wasn’t subconsciously ready for such success. The band split when I  was 20. But I couldn’t go back home. I had left home for this. So, I never stopped trying.”
In 2004, Neha tried releasing an album independently, but it didn’t work out. Only in 2010, she managed to release her debut album Tabaah. Yet, it was an unsuccessful attempt. “I knew I was good at what I was doing, but people weren’t ready for independent music,” she says. It was during this trying period that Neha had music composer Sameer Uddin as her only support.
In October 2016, she married Sameer in a fairytale wedding at Tuscany, Italy. “It’s a liberal marriage. We understand each other’s work and Sameer still makes breakfast for me. The only thing that has changed is that I don’t have to hide from my mother that I am with him, when she calls (from Delhi).”
With so much love to share, Neha is also aware of personal space in a relationship. Perhaps, one of the reasons behind her latest single – Shudai, a Punjabi song that was released during Valentine week this year, with British rapper Raxstar. The video has already garnered 2 lakh views (and counting) online.
Though it has taken time for Neha to be where she is today, she is in a happy place. “I don’t miss Viva. Though I am grateful for the break it gave me, it was the most painful phase of my life. I had nobody in the industry, and I had to continue what I was doing. It wasn’t easy for me, as a young girl away from home.”