Sunder Ramu wants to create a photo installation of empty plates once people are finished eating. And, Sandesh Reddy wants to solve all of world hunger.

One is a photographer, and the other is a chef and restaurateur. Of course, they happen to be good friends. With the two together, you could tell the dynamic would be fun. The genuine spontaneity and brotherhood between these BFFs, we found, can easily blow most sitcom pairs out of the water. Here’s raising a toast to the kind of friendship that inspires you to do more, even when you have absolutely nothing in common.

Sandesh Reddy: Sunder! The interview’s rolling! How did we get ourselves into this? (Laughs.)

Sunder Ramu: I don’t know about you, but when they called me and said they were getting interesting personalities to interview each other, I had a whole lot of people running through my mind. And then they told me it was you, and it was too late to back out! (Hint of a smile.)

Sandesh: The scam is, they told me I was meeting a celebrity, and they made me sit in front of you! (Laughs.)

(More seriously.) I know you keep reinventing yourself constantly. From theatre artiste to photographer to actor to serial dater (Sunder once announced that he would go on 365 dates and have the women foot the bill, to raise awareness about women’s rights, and in turn, contribute the amount to a charity)... What is that process like? Especially given that you are continuously nurturing your craft as a photographer, while doing everything else.I mean, it’s like me trying to learn how to dance while I’m still cooking for
a living. 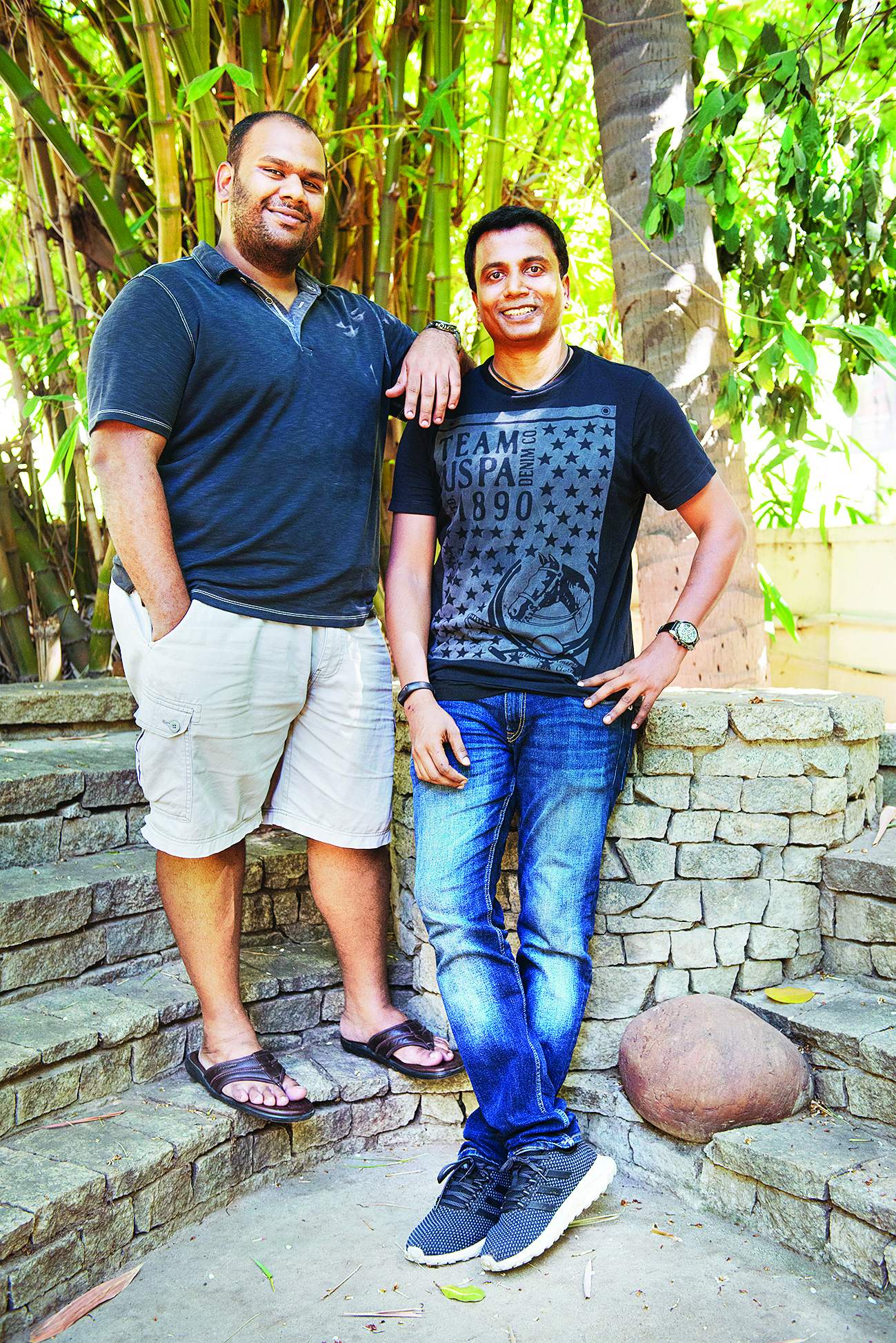 If you’re trying to build something that is so cutting edge but you don’t have an audience that appreciates it, then you’re doing it for yourself.  And that’s fine... but you can’t make a business out of it.
— Sandesh Reddy

Sunder: Every time I try something new, it excites me, and that makes life a lot more fun. Every one of these skills has actually helped me behind the camera.

I used to dance for a living, and the posture that I learnt from dance helped me get what I needed when a model was in front of the camera. Theatre helped me get with the expressions...

Sandesh: I’ve noticed that every time you went through one of these experiences, your photography transformed as well.

Sunder: Remember our first shoot at Sinful Somethings (Sandesh’s first venture), back in 2006?

Sandesh: Yeah, this December will be 12 years since I got into the food business.

Sunder: We thought it was going to be two hours, and we ended up shooting until 8 am the next day. With the energy that we shared, I remember thinking — this guy is going to create something special, even way back then. And you have!

Not a lot of people know this, but when you started Sandy’s (Chocolate Laboratory) in Rutland Gate (Nungambakkam), it was considered a very unlucky spot, because businesses kept failing there. And you changed the perception of the space around, because now it’s always packed.

Sandesh: That’s funny because my biggest challenge has been to do with perceptions, not dealing with perishables. In the food industry, you’re only as good as your last meal. That meal is the perspective of somebody walking through the door — and the baggage they come with, good mood or bad.

Now, with social media, everybody has a voice. And that skews of a lot of dining experiences for other people. So, building a dining experience that I truly believe in is more of a challenge now, than when
we first started.

Sunder: How do you strike a balance between giving people what they want, and staying true to your art?

Sandesh: I used to be a bit cocky, to say the least. But here’s the thing. If you’re trying to build something that is so cutting edge, but you don’t have an audience that appreciates it, then you’re doing it for yourself.

And that’s fine... but you can’t make a business out of it. So I’ve learned to adapt. For instance, people have stopped eating with their eyes first, but with their phones first, right?

Sandesh: So, that involves factors like the food getting cold, and the environment that enhances the whole experience...

Sunder: Something I want to appreciate is that despite our friendship, you’ve never once said to me, ‘Hey, can I have that print for my house?’ In fact, you not only advised me on how to be business savvy with my
photographs, but you cut a cheque of one lakh and bought one.You have always given me that respect for my work.
When people who are friends try asking for a discount, you never know: Are they coming to you because you’re good or because they’ve known you for a long time, or because you’re cheap?

Sunder: Also, I’ve heard a lot of people say to me, ‘This is all good, but you could do this on your own, because you have backup.’

And the truth is, neither of us do. I started off with a third-hand camera. It was a Nikkormat, where you couldn’t focus the lens, because there was sand in it.

I was trying to convince girls to model at a time when it was taboo.

And my dad’s Rs 9,000 car became my office. We would cover it with black cloth and use it as a changing room, when we’d drive down to the ECR for a shoot.

Sandesh: It’s nice that all these years later, when we look back at what we talked about, we’ve accomplished a fair amount.
Sunder: Remember, we chatted about shooting an art series on plates after people had finished eating?

Sandesh: Yes! And now, since you brought it up, we’re definitely doing it. Also, the wheels are in motion for my non-profit.

The first conversation I ever had with Mansi (Sandesh’s wife) the day we met, I told her, ‘Whatever I’m doing, I want to stop at 40 and then work towards solving world hunger. I might not make a dime, and you might have to support yourself... ’ Now, I’m 33. And earlier this year, she said to me, ‘Why do you need to wait till you’re 40?’

What about you, what’s next?

Sunder: I gave you a story for a film, years ago, and you liked it and said you’d produce it. I remember telling you, ‘I’m not ready yet, craft-wise. Let me act in at least 10 movies first.’ Well now, I’m in my ninth...

Sandesh: So, I should get ready then. I think it’s great that we have this space to talk, where we can share our ideas and vulnerability, without being judged.

Sunder: That’s the next thing we need to work on — setting up a forum for peer-to-peer conversations with an honest bounce-off. A lot of people get stuck because they don’t have it.

Being supportive is not just a pat on the back, it’s also being honest. And that means business-wise as well. If something isn’t working — to have the courage to shut it down, like you once had to.

Sandesh: I agree. I mean look at us, we have nothing in common — you’re a photographer and I’m a cook. But here we are 12 years later, continuing the same conversation...