Bengali stars Nusrat, Mimi bring a touch of glamour into the Indian parliament

In the Instagram era, gone are the days when women Parliamentarians - be it Hema Malini, Rekha or Jaya Prada who were heartthrobs of millions on big screen - never mixed up their professional and public appearances.

For the young Bengali actors-turned-politicians Nusrat Jahan and Mimi Chakraborty, there ain't no boundaries when it comes to connect with the millennials on social media platforms, especially Instagram.

It's been two months since actor-turned-politician Nusrat Jahan got married to Nikhil Jain. But with the former actress actively taking part in politics, the newly-weds haven't had time for their honeymoon, up until now.

Sharing pictures on her social media handle, Nusrat is seen enjoying her holiday in a white and black striped crop top over a black bralette. She paired them up with white pants and sunglasses, but what captures most attention even now are her red bangles and sindoor, which is considered to be the mark of a Hindu bride. 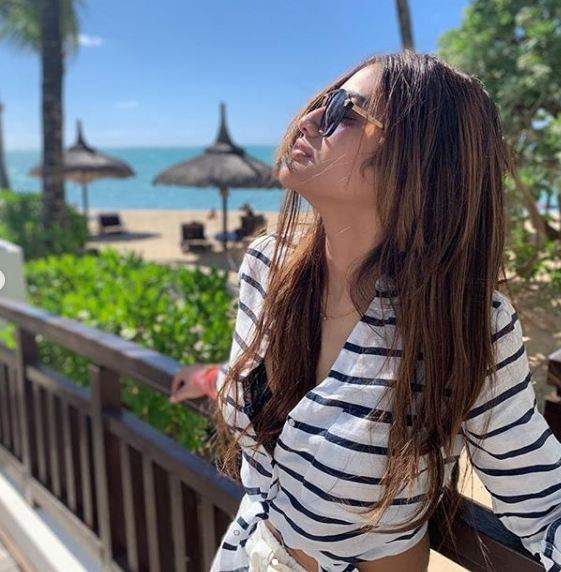 Crediting her husband for the image, the caption read: "It's better to have ur head in the clouds and know where u are.. paradise has never been about places, it exists in moments, in connection, in flashes across time.. pic courtesy hubbilicious @nikhiljain09

Commenting on the photo, best friend and fellow politician, Mimi Chakraborty asked: Honey how is the moon? To which
Nusrat replied: "Honey and moon is great... but sun is shining too bright here..!! Expect some colour on me bonua."

Nusrat Jahan and Nikhil Jain hosted a reception for their near and dear ones a month after they tied the knot. Post her wedding, Nusrat took her oath in parliament. Nusrat's best friend Mimi Chakraborty was part of her wedding and reception, and both the actresses-turned-politicians were bashed for picking wedding over the oath-taking ceremony. Nusrat and Nikhil Jain's images went viral on the internet with #TheNJAffair.

Its better to have ur head in the clouds and know where u are.. paradise has nvr been abt places,it exists in moments,in connection, in flashes across time.. pic courtesy hubbilicious @nikhiljain09