Ali Fazal is currently busy shooting in Benaras for the second season of his hit Amazon Prime show Mirzapur. He will soon kick off the promotions of his next film Prasthanam with Sanjay Dutt. Ali was up for rude shock on social media on August 1 when he found a song of his film Tadka doing the rounds on fan club pages.

Months after the Taapsee Pannu and Ali Fazal starrer Tadka directed by Prakash Raj ran into legal debacle, Zee Music (the music wing of Zee Studios) was seen uploading a song from the film on their official YouTube channel (7 days ago) and even tweeting the same from their official handle. The film is a remake of the Malayalam hit Salt N' Pepper, has run into legal trouble over the IP rights of the venture. The film also stars Nana Patekar, Shriya Saran, in key roles.

Ali was quick to turn to Twitter to call out the producers for their ethical breach. He tweeted, "There's a court case on the producers of this film as far as I remember. Cheques had bounced. Actors and crew still haven't gotten paid. Surprised to see a promotional song coming out from the film (sic)" 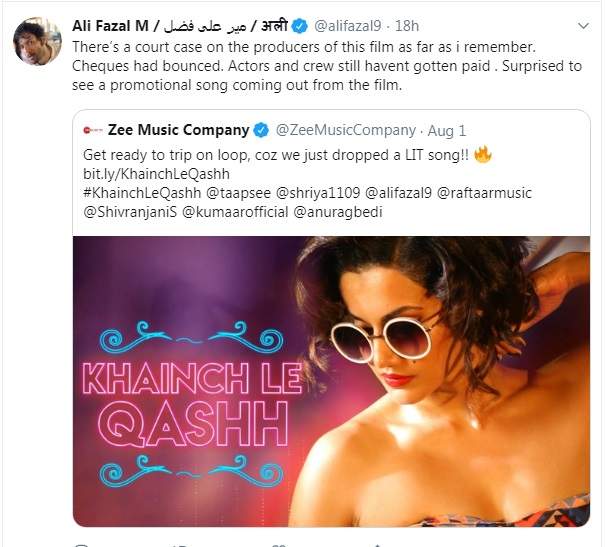 A source informs, "Ali was utterly displeased with the rampant flouting of court rules which evidently had kept the film on hold. Additionally, he saw the incident as a breach of ethical conduct on part of the producers who are yet to clear payments for cast and crew but are willing to flaunt their film on social media. Not the one to stay mum on issues close to his heart, he put his version out there to make his stand on the matter clear and show his solidarity with the aggrieved cast and crew."