‘Priyanka Chopra gaslit me’ says Pakistani woman, who confronted actress at a US event

Priyanka Chopra-Jonas found herself answering some tough questions at the Beautycon Los Angeles. But the debate didn't end there for the Bollywood-Hollywood actress.

After a Pakistani member in the audience questioned her about the actor’s tweet from earlier this year, that read, “Jai Hind #IndianArmedForces,” Priyanka, who is a United Nations Goodwill Ambassador asked her if she was done “venting”, not to “yell” and that “we’re all here for love.”

The Pakistani lady who was subject to internet backlash has now said that the actor and made her “the bad guy” as an “irresponsible UN ambassador” in a series of posts on Twitter, that is going viral.

Her posts read: Hi, I’m the girl that “yelled” at Priyanka Chopra.

It was hard listening to her say, “we should be neighbors and love each other” — swing that advice over to your PM.  Both India and Pakistan were in danger. And instead she tweeted out in favor for nuclear war. (sic)

She added:
It took me back to when I couldn’t reach my family because of the blackouts and how scared/helpless I was.  She gaslit me and turned the narrative around on me being the “bad guy” — as a UN ambassador this was so irresponsible. 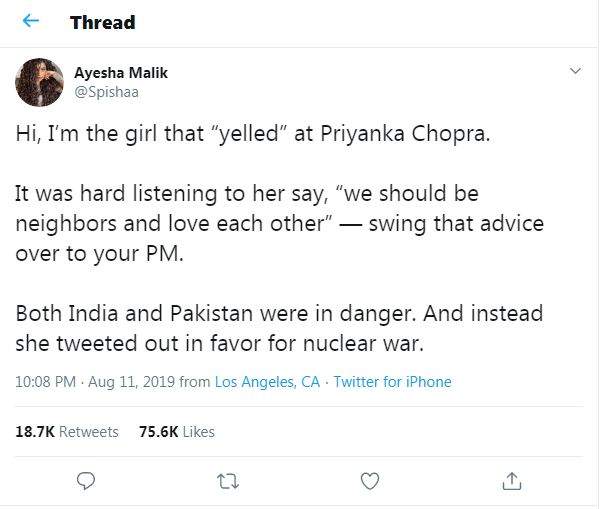 Her final post was a reference to Priyanka calling Ayesha’s question as ‘venting’ at the event, along with another clip, “Whenever you’re done “venting”. Sorry, didn’t realize that speaking on a humanitarian crisis was “venting.”

“Whenever you’re don’t venting”. Sorry, didn’t realize that speaking on a humanitarian crisis was “venting” pic.twitter.com/OqCLgjDNa1