Bollywood star Akshay Kumar is at the receiving end of the Twitteratti's wrath since Monday. A screenshot of the actors 'like' on a post that mocked the Jamia Milia protests went viral on Monday, leaving netizens very angry.

While people started sharing the screenshot, blaming the actor for supporting violence, he responded rather quickly, clarifying his stance on the matter.

“Regarding the ‘like’ on the tweet of Jamia Milia students, it was by mistake. I was scrolling and accidentally it must have been pressed and when I realised I immediately unliked it as In no way do I support such acts,” he had posted.

However, Netizens weren't pleased with his reaction and went ahead, trolling him. Soon enough #BoycottCanadianKumar was trending nationwide on the microblogging platform. One particular user retweeted Akshay's tweet and wrote: “I have immense respect for Akshay Kumar. It must be extremely difficult to be trained in Martial Arts with a spine missing.” 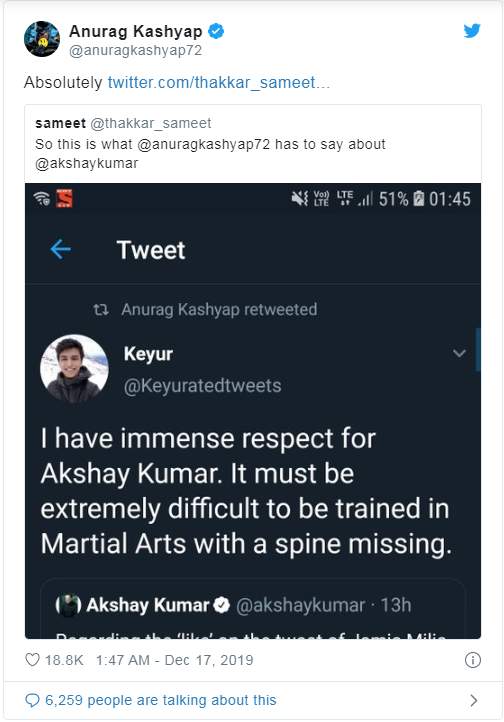 Things took a different turn as to everyone's surprise, Bollywood director Anurag Kashyap agreed with the fan, thereby creating a storm in the online world. He even reaffirmed his statement by writing 'absolutely' as he retweeted it.

Akshay or any other actor is yet to respond on the matter.