Like most women, Neha Dhupia has also put on weight post-pregnancy and that hasn't stopped her from sharing pictures of her on social media.

However, a publication recently posted an article with an extremely insensitive headline, fat-shamming the actress and taking a dig at her post-pregnancy weight gain. The 38-year-old actress took to her Twitter account give it back.

She wrote: “I don’t owe anyone an explanation because fatshaming like this doesn’t bother me one bit. But I do want to address this as a larger problem because fatshaming needs to stop for EVERYONE and not just celebs. As a new mom, I want to be fit, healthy and energetic for my daughter. So I work out everyday, sometimes twice a day because for me…’Fitness’ is a priority and not ‘fitting into’ society’s standards regarding looks. And I hope in the future people are kinder to each other while making such vapid and vile comments. To quote @Pattonoswalt…’Be kind. It’s chaos out there,” – her statement on Twitter read.

Karan wrote: Neha! You are an amazing Woman! You walk so many paths with humour...with intelligence and with abandon!  It’s never about losing weight it’s always about gaining perspective! And I hope the woman who wrote this has gained some today.... 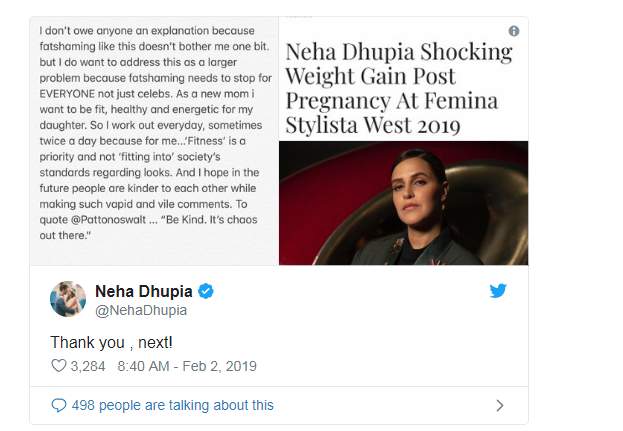