‘I lived on beaches, slept on platforms’: Anupam Kher on his struggling days in Mumbai

In his 35-year-long career in cinema, Anupam Kher has done over 500 hundred films and has won numerous accolades, including two National Film Awards and eight Filmfare Awards. Although he is one of the most sought-after actors, his beginning was full of struggles.

In an interaction with Humans of Bombay, the 64-year-old actor revealed that he discovered his love for acting very early in life. “I got my calling when I acted in a play in 9th grade. I couldn't say my lines well, so they were given to someone else. But during the play, he forgot to say them! So I made something up in my broken English–the audience was in splits!” he recalls.

The actor soon discovered that he loves being on stage and wants to act full time. He then saw an ad for an acting course in Chandigarh and decided to pursue it. “I needed Rs 100 for the audition. I stole it from my mom and told her I was going for a picnic. Thankfully, I was accepted! So I went to Chandigarh to study acting. I was a teacher for 2 years before I saw an ad that a drama school in Mumbai was hiring,” recalls the actor who has also popular television shows like The Anupam Kher Show - Kucch Bhi Ho Sakta Hai and Say Na Something To Anupam Uncle. 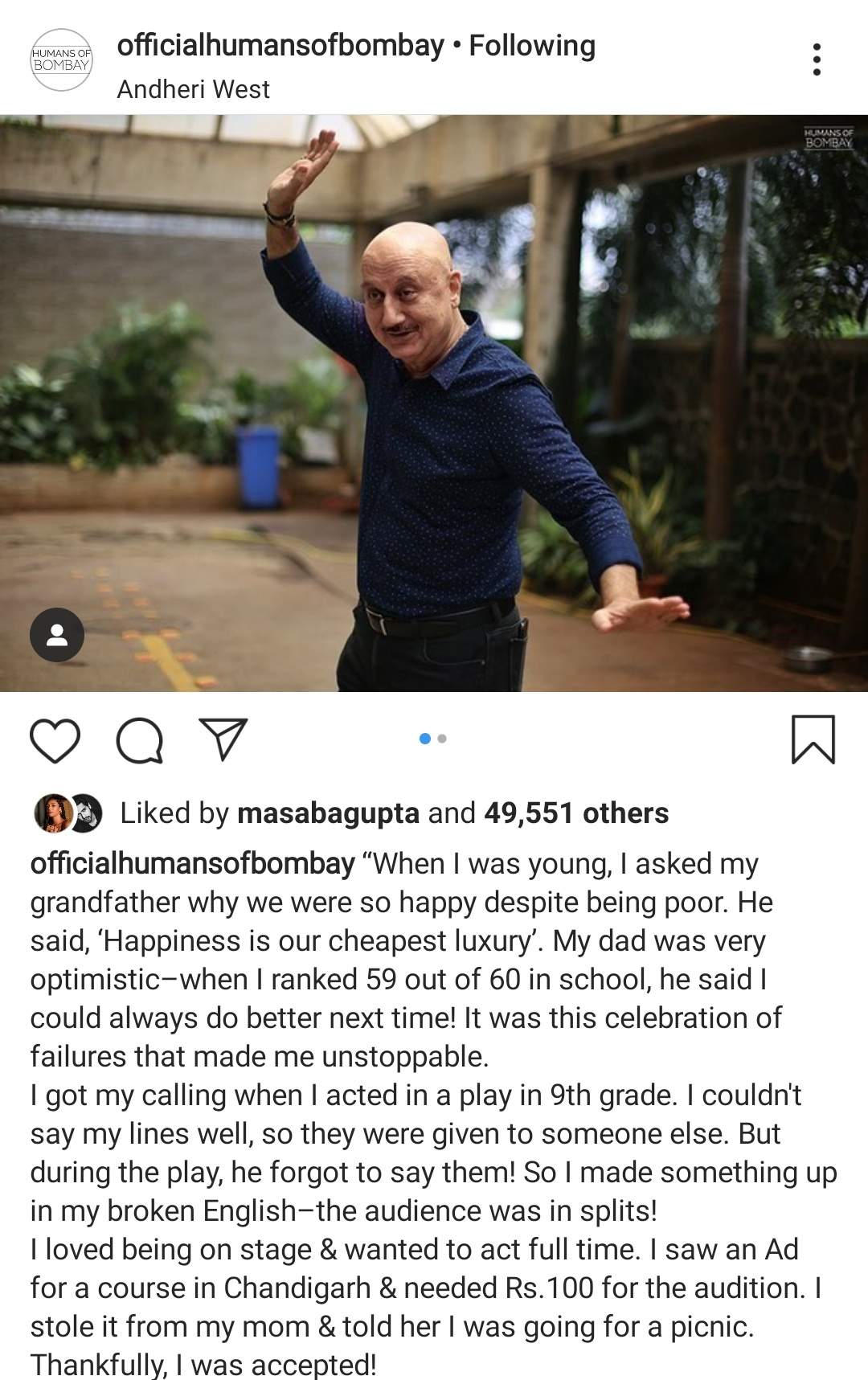 In his quest to pursue his dream, the actor then moved to the dream city but it wasn’t all hunky-dory. “When I got here, I realised they had no money – they gave me a small space to teach and a tiny room to stay. I didn’t want to go back a failure. So I taught there, while auditioning and performing in plays. It was hard – at one point I had no work, money or help. I had to live on beaches and sleep on platforms,” says the recipient of Padma Shri (2004) and the Padma Bhushan (2016).

However, like everyone else, he didn’t want to worry his parents and instead wrote to his grandfather that he wants to come back. However, he replied back saying, ‘A man who’s already drenched in water, shouldn’t be scared of rains’. Resultant, Kher stayed on and soon bagged a role in Mahesh Bhatt film alongside money and a place to stay.

“But later, I was told that I was replaced. I called Mahesh Bhatt and he said it was true. I couldn’t take it and decided to go home. But first, I met Mahesh Bhatt and told him no one would play the part better than me – he was making a mistake. So he told the producers he wouldn’t make the film without me – he saw the vigour with which I wanted to act. That’s how I got my first film,” says the actor.

That film was Saaransh, where then 28-year-old Kher played the role of a retired middle-class man who loses his son. His performance earned him his first Filmfare Award for the Best Actor. Over the years, he has done hundreds of films in several languages and has also appeared in many acclaimed international films like Golden Globe-nominated Bend It Like Beckham (2002) and Oscar-winning Silver Linings Playbook (2012).

“Today I’ve done over 500 films. It’s been a bumpy ride, but every day, I thank my failures for bringing me this far. I thank all the people who said no to me, all the people who didn’t help me–because if it weren’t for them I wouldn’t have pushed myself to get where I am today…a place where my dreams, are now my reality,” he concludes.