Singer Nick Jonas pulled all stops to throw wife and actress Priyanka Chopra an extravagant 37th birthday party. The centre-piece of the bash was the massive, five-tiered birthday cake, which the internet had joked was as tall as Nick.

Now reports have emerged that the lavish cake, which was a five-tiered red confection, adorned with the metallic embellishments, a ‘Priyanka’ cake topper and massive sparklers cost about  $5000 (Rs 3.45 lakh). The cake artist of Miami-based, Divine Delicacies Cakes, revealed that it was Nick’s idea to have the cake made in red and gold, which had complemented Priyanka’s outfit of the night. 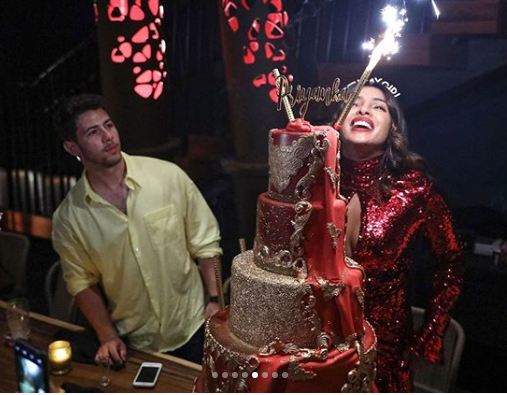 Priyanka celebrated her special day with friends and family in Miami. She was seen cutting her birthday cake with Nick, mother Madhu Chopra and cousin Parineeti in tow.

Priyanka also wore a tiara that read ‘birthday girl’ on her head, while the cake was decorated with glitter and ornate designs. Nick had also shared a video of Priyanka in the same red dress. “Light of my world. My whole heart. I love you baby. Happy birthday,” he had captioned the video.