Once a popular actor in Bollywood, Savi Sidhu who has acted in movies such as Gulaal, Patiala House, Bevakoofiyan, among others, works as a security guard now. A popular film and entertainment website recently shared a video of the actor on YouTube in which Savi is seen sharing his story and the reason why he had to take up this job.

"It is a 12-hour tough job. It's a mechanical job. I don't even have money to buy bus tickets. To watch a film in theatre is like a dream now. My financial condition is not good," he said in the video.

The video went viral in no time and celebrities from the film fraternity including actor Rajkummar Rao and filmmaker Anurag Kashyap have come out in support of actor, who went for an alternative career option due to financial crisis.

Rajkummar on Tuesday took to Twitter to extend support to Savi saying: "Will ask my casting friends to reach out to you."

"Very inspired by your story Savi Sidhu Sir. Have always admired your work in all your films. Love your positivity. Perseverance is the key to overcoming obstacles," he added. 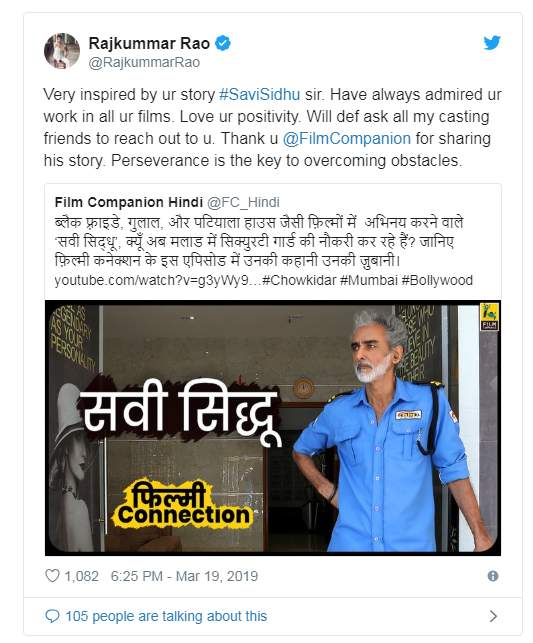 On seeing the video, Anurag tweeted: "I respect Savi Siddhu as an actor and have cast him thrice when he earned the role. I respect him that he chose to live his life with dignity and picked a job unlike so many entitled out of work actors who have either become alcoholics or wasted themselves away." 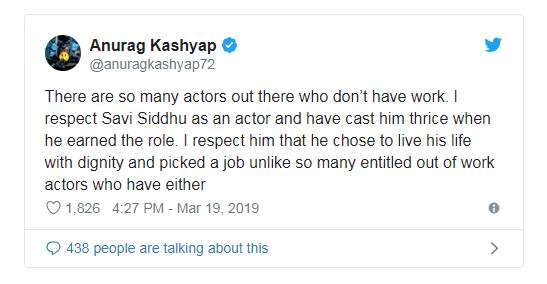 Sharing examples of actor Nawazuddin Siddiqui and others, Anurag further added: "He used to be a watchman. I used to be a waiter, I met one actor who sells bhelpuri on streets, I know an actor from 'Black Friday' who drives a rickshaw. I have seen the great Uday Chandra who did 'Hum Paanch' and 'Khel Khiladi Ka' in my early days walking the street. This is also true for many people in all walks of life. To give an actor a role out of sympathy, is insulting."

"Only thing one can do is get the casting directors to audition him for him to earn the role and for that, he will have to walk to that casting director's office like million others. He has made a conscious choice and one should be proud of him that he did not allow the vanity of the artiste to destroy him, and he actually does a job. At least, he is not begging. I genuinely believe that charity does not make art or an artiste. You want to help artistes like him then you need to start watching their art by paying for it," he shared.