It's yet another bad day for Karan Johar in the world of social media. The star filmmaker supposedly liked a tweet earlier today that abused Shah Rukh Khan and compared him to Akshay Kumar's stardom.

The tweet by a user called Mannu Yadav read, "Half day colls [collections] of Kesari on Holi day (which is worse than pre-Diwali day) [is] greater than Zero full festival day collection."

Shah Rukh Khan fans spotted the 'like' by Karan Johar almost instantly and went on a tweeting spree against KJo. In no time, the hashtag, #ShameOnKaranJohar started trending on Twitter with more than 22,000 tweets. 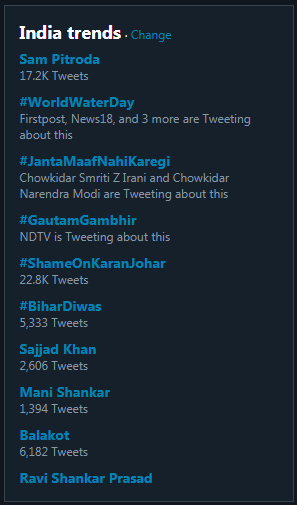 Reportedly, Karan Johar soon realised his mistake and 'unliked' the tweet. However, Shah Rukh Khan fans flooded Twitter with screenshots of the liked tweet. Some even tagged Shah Rukh Khan on their tweets, asking him to respond.