In her latest stand-up special on Amazon Prime Video,  Anuradha Menon (aka Channel V’s Lola Kutty), remarks, “My mother always says — Anu sucks but Lola rocks.” And for those who know her mother Minnie Menon as a self-made designer of semi-precious jewellery and a council member of the Tamil Nadu Tennis Association, they would be inclined to believe that Anu is not kidding around with that statement. In an exclusive chat with Indulge, we speak to the mother-daughter duo on their family dynamics, differences in opinion and more.

Anuradha, or Anu Menon as she is now called, was born in Madras (“It is an effort to call it Chennai, it just feels weird,” she says) to Minnie and Mohan Menon, who’d moved from Bombay to Chennai and were working in advertising, which Anu feels helped shape her as a person, because she got to “meet all the fun people — the kind that spoke with no filters.”

She grew up a studious student, under the watchful eye of her grandfather. “My father would take care of her homework and studies as if she was sitting for her IAS exams,” chimes in Minnie. “Because of that, now I am a Homework Hitler with my seven-year-old. He does not have the patience or concentration to study. I’m just wondering what sort of a faulty gene my husband has passed on to him,” Anu quips.

Bombay dreams
Despite the good grades and being ‘quite the nerd’, Minnie remembers that even as a child, Anu would love staging performances for her, in the privacy of their home, which is why she egged Anu to audition for her school play. “Mom threatened me saying, ‘you’re always inflicting these stories and fun things that happened at school on me. You should do it on stage instead.’ On that threat, I auditioned. It was such a transformation that all my teachers were like, ‘My God, Anuradha, where have you been hiding all your life?’,” Anu recalls, adding, “I really came to my own in college though. I was a part of the drama society. I even took a year off after that and decided to go to Drama School in England. The plan was, I would come back to Bombay and get a job that supported my passion for theatre.”

In Mumbai, she got her break in theatre, playing a governess in Divya Palat’s The Verdict, which landed her an offer to be a VJ for Channel V. Thus her alter ego, Lola Kutty — a typically South Indian girl with a heavy Malayali accent — was born. Today, however, Anu can easily perform a British, Australian and even a Gujarati accent perfectly. Lola was an instant success all over the country, so much so that even today people identify Anu as Lola. Venturing into stand-up only came much later. “When I created Lola, people just associated me with that. I never really wanted to do stand-up; it was more of a progression. Maybe I’m more theatrical because of my background in drama. If you look at stand-up as an art, then the funniest people we know are not stand-up comedians because they don’t want the pressure. Ultimately, stand-up comedy is not about being funny, it’s a set. You need a beginning, middle and an end. It’s very different from telling a story at a party and putting that person on stage, and asking them  to hold a concept for an hour. It has an art to it,” Anu offers.

Fight club
Anu credits her parents for her excellent comic timing. “With comedy, I am naturally sarcastic and both my parents —  my father especially – have a great sense of humour. Every time I am in Chennai and attend an event or a show and come back home, I’ll find a funny note pinned to my door, which they’d have written — a poem, pun or some funny lines related to the event or show I’d just returned from,” she says.

So does the mother take offence when the daughter uses events from their everyday lives as content for her shows, we wonder? “Our friends say that Mohan and I both have a sense of humour, so we are able to laugh at ourselves. Whenever she performs in Chennai, she usually does a take on my Tamil, which gets the most laughs. Good stand-up comedians do a ‘slice of life’ portrayal in their sets and those stories  get them  the best laughs. Does Anu make me laugh at home? Certainly not. But I do find her line on me — ‘my mother is my biggest inspiration and exasperation’ — really funny,” says Minnie.
But like any mother-daughter relationships, theirs too has had its share of ups and downs. “With my father, it is different. If we have a disagreement, we sit and debate it out. With mom, it is actually a cute thing. Although I’m 30, and pay my taxes, I’m still a child to her. So she takes it personally if I disagree with her. It is as if her opinion is not good enough. But we always sort it out immediately,” Anu says. Minnie concurs. “We both have strong views on men, women and other matters. We have our differences but we also have an extremely close-knit bond. When I hold my jewellery shows, she is always the one who comperes it. She even has the audience in the ballroom laughing hysterically with her when she says things like “Minnie, I demand a family discount on your new pieces. I am not even being paid to do this.’ The guests seem to enjoy the mother and daughter banter.”

Gender bender
With stand-up comediennes like Aditi Mittal, Sumukhi Suresh and Kaneez Surka making a name for themselves in the world of comedy today, we ask Anu what the scope for women in the field are — considering she started out much earlier, and if women really do have to fight the gender battle in this field as well. “People also assume that all women comedians talk about the same things — their genitalia and their periods. It is not true. I have nothing to say about my genitalia except that it works fine because I produced one child out of it. I don’t see why if men don’t all have the same voice in comedy, then why should all women? When male comedians talk about their wives everyone will find it funny but with me who talks a lot about her family, it’s like ‘how can she make fun of her kid like that being a mother?’ There’s a certain gender thing that won’t change,” she rues.

Beyond comedy, Anu works with causes and NGOs that deal with the girl child. That apart, Anu says that they also take care of their staff at home. “At the end of the day, they’re our extended family. We have taken out insurance policies for them, and take care of their children’s education,” she offers. On the work front, she is busy with writing her new stand-up special. “I wanted to do a show like Fleabag and the character notes were so similar that I was like, ‘damn it’, when the show came out. I want to do theatre as well, because that’s important to me. I get calls for auditions but my roles are mostly ‘modern, posh mother’. A TV show next year is also in the works,” she signs off.

Parenting 2.0
Anu concedes that her generationis perhaps the first one that doesn't take advice from their parents but from peers on the internet. “Parenting itself has become a challenge. The sense of involvement is far greater for some reason. There’s a great line that I read, ‘Previously, parents used to prepare their children for the road ahead but now, parents prepare the road ahead for the children’. It’s come down to that — where you’re trying to control everything —micromanaging, which is just not possible.”

Her son's generation, she feels is two leaps ahead in terms of exposure and experience. “I went abroad at only the age of 12, my son went abroad when he was 1. He’s seven now, and he’s already been to London thrice. For him it’s normal, he doesn’t know any better because we’ve taken him that early. He’s born into a different India as well. I used to go to Eldorado and Videovision to borrow cassettes to watch cartoons and he’s woken up to Netflix and Amazon. But one has to enforce a sense of normalcy in this great privilege. You don’t want to spoil them as well, but this is the world we live in. The challenges are different but at the core of it, it’s the same. My mother and I are good friends, we were buddies growing up and my son and I are also buddies. Now the three of us travel together. We went to see the World Cup (India vs England match at Edgbaston) together, and we all had a blast,” she says. 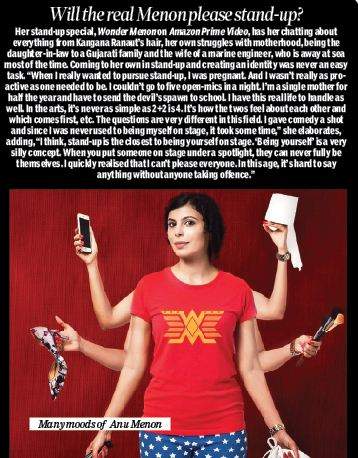