Aparna and Aruna Guhan, fourth generation scions of AVM Studios on the road ahead for the production house

In Chennai, references to cinema are everywhere. You can find them in the posters that are stuck on the scaffoldings of Metro constructions every Friday, on the billboards and garlanded cut-outs at strategic locations in the city, full- page keepsake posters in your newspapers, and even in the memes that flood your Instagram and Twitter pages. The epicenter of all the cinematic action is Kodambakkam, which is believed to be how the Tamil cinema industry got its name — Kollywood. Modernisation has given way for the area that once housed about 20 studios, to be developed into a thriving hub of everything from hospitals to malls. However, on the busy Arcot Road, one structure still stands today, harking back to the earliest days of Tamil cinema — AVM Studios.
Built in 1949 by AV Meiyappan, a man who loved films as much as he did his filter coffee, the studio might be a shadow of its former self, but it still stands strong as a production house, making films and television serials in all South Indian languages. Keeping up with the times, they have also ventured into the digital space, spearheaded by the fourth generation heirs of the empire — Aruna and Aparna Guhan, the great-grand daughters of AV Meiyappan, and granddaughters of M Saravanan, who took over the business after Meiyappan’s demise in 1979.
Aruna and Aparna are fraternal twins. They are different yes, but still somewhere, they are the same. They are the bridge between the old and the new, a perfect blend of traditional and modern. Stepping into the business six years ago in 2013, Aruna and Aparna have been instrumental in giving AVM a digital presence through YouTube, Twitter and Facebook and producing fresh content including a 90-minute web film, Ithuvum Kadanthu Pogum. With plenty of projects in the pipeline, including a pan-Indian film titled Saheb, directed by Balki in 2020, we speak to the Guhan girls on heralding a change in the industry, the
challenges they have had to deal with, and more. Excerpts:

What it was like growing up in a family that made movies? How did it shape your decision to take over the production house?
Aparna: We didn’t grow up with movies. We were kept away from the sets as children. However, we always knew we would join
the business.
Aruna: The first movie we were on the sets for was Minsara Kanavu, when we were eight years old. We got to go because it was during our summer holidays. We loved being on set!

What were some of the biggest lessons you learned from your parents, and especially your grandfather, that has helped you professionally and personally?
Aruna: We started working when we finished 12th grade. Our father and grand-father wanted us to spend time in every department of filmmaking, and we used to enthusiastically sit with our grandfather for script discussions.
Aparna: We walk into their rooms and continue to learn from them every day. Our grandfather’s involvement in the process of film production from beginning to end is something we are inspired by.

What parenting advice have you picked up from your parents, which have impacted you the most, and hope to pass on to your kids someday?
Being punctual is something we inherited from our parents. We feel that it is a sign of professionalism, and helps you stand out as a reliable and trustworthy person.

Both of you run the business together. Do each of you have designated roles in the day-to-day functioning of AVM Studios?
At work, we have well-described roles in day-to-day activities. We handle different projects.

Has there ever been a time when you didn’t agree with each other? How do you resolve creative conflicts among yourselves?
Aruna: We do disagree on things sometimes because we have different personalities. But we have a very close relationship.
Aparna: We each bring different strengths to the table. But creatively, we don’t disagree much, because we both want to make the same kind of intelligent, out-of-the-box content.

What would you say were some of the major changes you introduced in AVM since 2013? How were these changes welcomed — both at home, and in the office?
Aruna: We are very fortunate to be a part of a business that is more than 73 years old, one that has grown by leaps and bounds. The biggest development we have brought in is piloting the brand into the digital world.

Have you ever felt disadvantaged at the workplace because you are young or because you were women? Or did you get any kind of special treatment, because at the end of the day, you both are the boss’ daughters?
Aruna: My dad brought us up to be bold, and we’ve never felt any limitations by being women.
Aparna: We didn’t get any kind of special treatment, and there is no compromise on the work entrusted to us. We are very dedicated to what we do. We are very aware of the legacy that we represent, and set
ourselves very high targets.

What were some of the major challenges that you’ve overcome (or are still overcoming) in the
last six years?
Aparna: More than challenges, we choose to see opportunities at AVM, and that sets
the brand apart even after four generations. We continue to evolve.

Beyond everyday activities as producers, what is your scope of work like? Any projects or initiatives outside films (or making them) that you are passionate about?
Aruna: I run a branding and design agency called Aruna Guhan Design. We work across industries to elevate existing brands and kick-start new ones.
Aparna: I’m the Founder and Managing Trustee of a children’s charity called Tiara Haemophilia and Cancer Foundation that supports children from low socio-economic backgrounds, who have been diagnosed with haemophilia or cancer.

Tell us a bit on what long-term plans you have for AVM in the years to come? What are some of the projects that you are working on at present?
We have a few projects in the pipeline. Look out for our official announcement, coming soon! 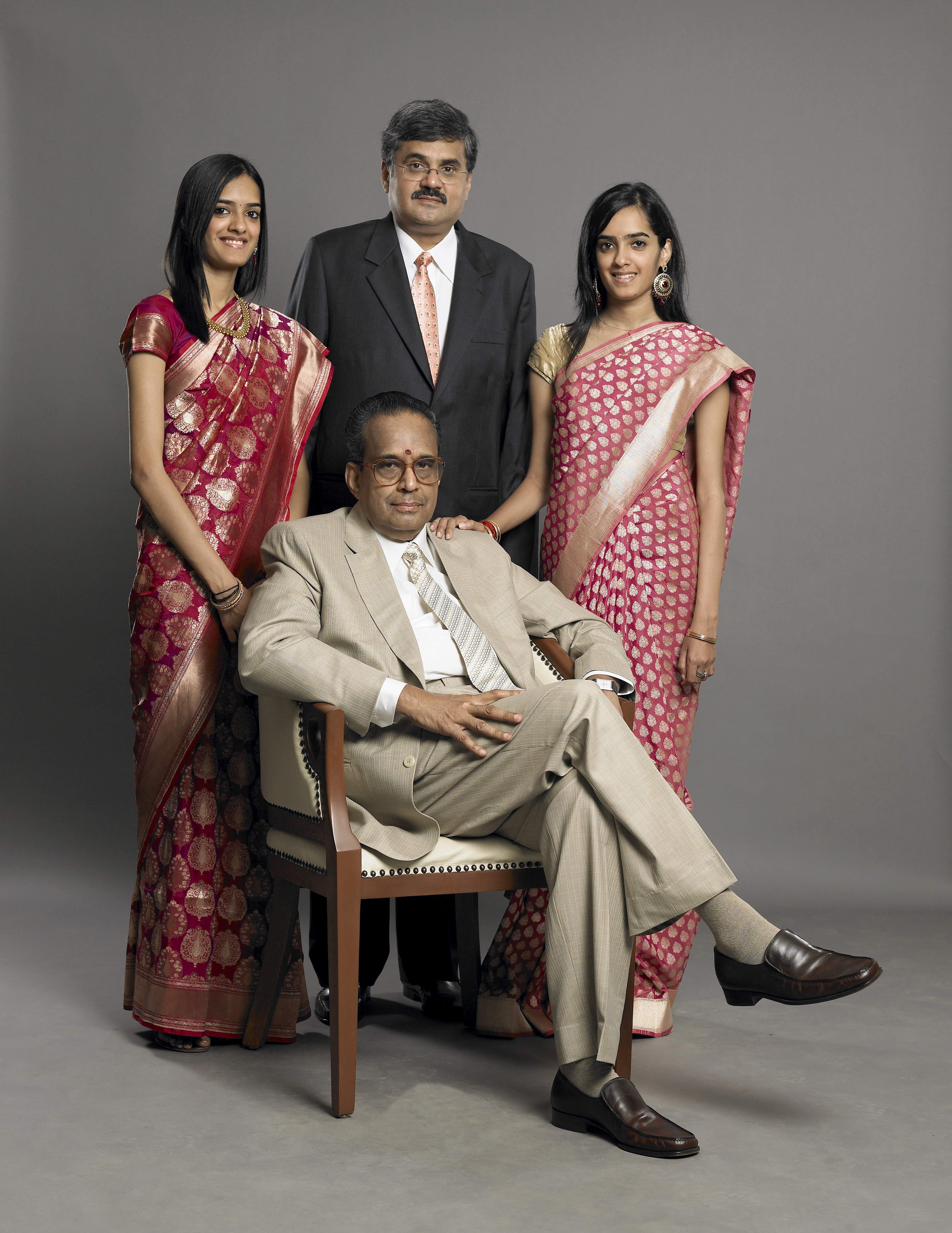 Reel talk
Back in 1934, right at the dawn of the talkie era, a young man from Karaikudi, AV Meiyappan (in pic), who produced gramophone records instead of merely marketing them, launched a Hindu mythology based movie, Alli Arjuna, under the banner of Saraswathi Sound Productions. The film, which was shot in Calcutta tanked, mainly due to the fact that the lead actor performed with his eyes narrowed through the film, due to bright lights on the set — something the filmmakers could not spot since they did not have the technology that supported playback. In his memoir, My Experiences in Life, Meiyappan writes about how the film was made on a budget of `80,000 and yet, it met with a “great loss”.
Multiple failures later followed, but that did not dampen the spirit of Meiyappan, who holds the credit of introducing playback singing with the film Nandakumar, a Tamil remake (starring iconic actor
TR Mahalingam) of a Marathi film. It was only in 1940 that Meiyappan produced Bhoo Kailas in Telugu, which received both commercial and critical acclaim.
A series of hits followed including Sabapathy (1941), En Manaivi (1942) and Harishchandra (1943) leading to many successful actors being introduced over the years, including TR Ramachanran, Sivaji Ganesan, Vyjayanthimala, SS Rajendran and even Kamal Haasan.

Kodambakkam chronicles
A part of AVM Studios on Arcot Road, which once stood tall and proud — with the signature rotating globe and the letters ‘AVM’, squeaking with each turn — might have made way for a multi-storey apartment complex now, but for every Tamil cinema lover, the space will always evoke a magical feeling of fantasy that motion pictures always carry with them.