The lockdown has brought the entire country to a halt. But while people have been trying to keep up the spirits while dealing with this testing period, actress Richa Chadha has come up with something creative to keep her fans entertained. The actress has started a new parody series on her Instagram, where she appears as a kooky and euphoric news reporter called Quarantina, who shares weird news from all over the world. 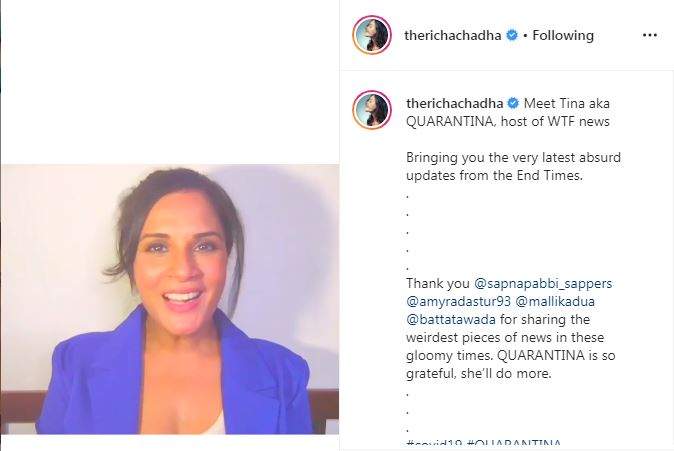 Talking about creating this character of Quarantina, Richa said, "In the first week of the lockdown, I was getting depressed looking at the death toll of this lethal virus and those that are suffering because of the lockdown. It was giving me anxiety. So I decided to do something about it. While my donations for the underprivileged are ongoing, I wanted to create something  that would make people smile. Worrying about what’s in the store could push us into a dark space. I am not making fun of the disease and it’s impact, simply trying to highlight that even in these conditions, sometimes there’s bizarre news that can make you chuckle despite yourself. For reality and truth, there’s the news but I wanted to make a satire which would lift our collective spirits in these times."

She recently also introduced an angry reporter from North India, called Tina Singh, who goes off-script in the middle of the sketch. While Richa has been seen in comic parts in films like Fukrey, her fans saw her funny side off- screen for the first time in 'One Mic Stand' last year, where she wrote and performed a stand-up comedy set for a live audience.

Her satirical take and unique sense of humour is what keeps the audience hooked to the this series. Penning down some crackling sequences and performing them with finesse, Richa is in top form as she makes Quarantina shine because of her dark humour.

While most Bollywood stars are busy posting either workout videos or getting fans to laugh by flaunting their jhadu-pocha (brooming and mopping) skills, Richa's Quarantina stands out because she's creating something specifically for her fans to keep going through these grim days and nights of the lockdown. Do check out Quarantina's regular updates on Richa's official Instagram page.