Rangoli Chandel, Kangana Ranaut's sister has never been one to shy away from controversy. The latest of which has caused the microblogging site, Twitter to suspend her account. 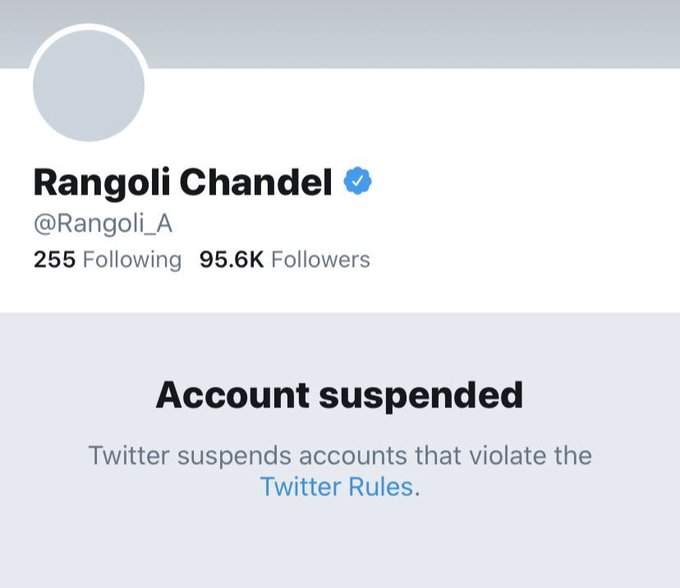 Rangoli's account was suspended after she posted controversial tweets regarding the Moradabad stone-pelting incident. Filmmaker Reema Kagti had tagged the Mumbai Police, urging action against one of Rangoli's posts.

Reema tweeted, "Could you please look into this and take action? Isn’t this spreading fake news AND inciting hatred & violence against certain people?@OfficeofUT."

@MumbaiPolice. Could you please look into this and take action? Isn’t this spreading fake news AND inciting hatred & violence against certain people?@OfficeofUT @AUThackeray https://t.co/tKCqS5CZgN

Jewellery designer Farah Khan Ali also shared that she had reported Rangoli's account and thanked Twitter for suspending it. "I reported this because she targeted a specific community and called for them to be shot along with liberal media and compared herself to the Nazis," she tweeted.

Supporting the same, actress Kubra Sait had also shared that she had blocked Rangoli on Twitter.

I’ve blocked Rangoli and reported her to twitter.
But @MumbaiPolice @CMOMaharashtra @OfficeofUT This kind of hate mongering is irresponsible. Please look into it, and take necessary actions. https://t.co/WywccuZvKR

Rangoli had tweeted last week that Twitter had given her warnings about her posts but she did not plan to pay heed to them. “If they suspend my account will open my own YouTube channel where I will make Kangana’s small videos saying what is there for everyone to see, we never said anything without evidence if twitter going to harass us we don’t want to be here just wishing good morning and good evening,” she had written.