Since the outbreak of COVID-19, film shoots have been stalled and theatres shut all over South India like in the rest of the world. However, controversies concerning our stars simply won't die down. Here are some recent cases that have kept social media busy over recent days.

To begin with, at the wrong end of social media fire right now is Dulquer Salmaan. Varane Avashyamund, his self-produced Malayalam starrer, may have won him praise as an actor, but he is drawing negative response from Tamil viewers because of a ‘Prabhakaran joke', which was misconstrued as a dig at the late Tamil leader Velupillai Prabhakaran. A scene in the film has actor Suresh Gopi calling a dog ‘Prabhakara', which is a reference to a popular dialogue from the Malayalam movie Pattanapravesham (1988).

Since the joke was misunderstood, many social media users began abusing Dulquer Salmaan and director Anoop Sathyan for being insensitive towards Tamil sentiments and demanded an apology. Dulquer subsequently sought apology and explained the reference. He also said that abusing his parents and family is not okay.

To all those who were offended. I apologise. And I also apologise on behalf of #VaraneAvashyamund and @DQsWayfarerFilm ! pic.twitter.com/erbjftlNbj

Malavika Mohanan calls out sexist tweets, then deletes it

Another star who has faced public ire lately is Malavika Mohanan. Master actor, Malavika called out a sexist tweet on Sunday. The image feature cartoon versions of the Master movie crew, where the woman in question (Malavika) is seen in the kitchen, while the men including Vijay, Vijay Sethupathi seem to be relaxing.

She tweeted: "The task of a woman even in a hypothetical 'movie house' is to cook? When will gender roles die? Sigh."

The tweet was followed by a slew of hate message from fans of superstar Vijay telling her that she has "crossed the limit". Singer and me-too movement activist Chinmayi expressed solidarity with the actor and tweeted: "I have been at the receiving end of hate just for saying "I like xyz film", nothing else. From that day on, I stopped saying which film I like." She tweeted: "A professional actor questions a fan-made illustration for portraying HER ‘role' in a way SHE didn't like. She gets bullied, abused and harassed into deleting her tweet." 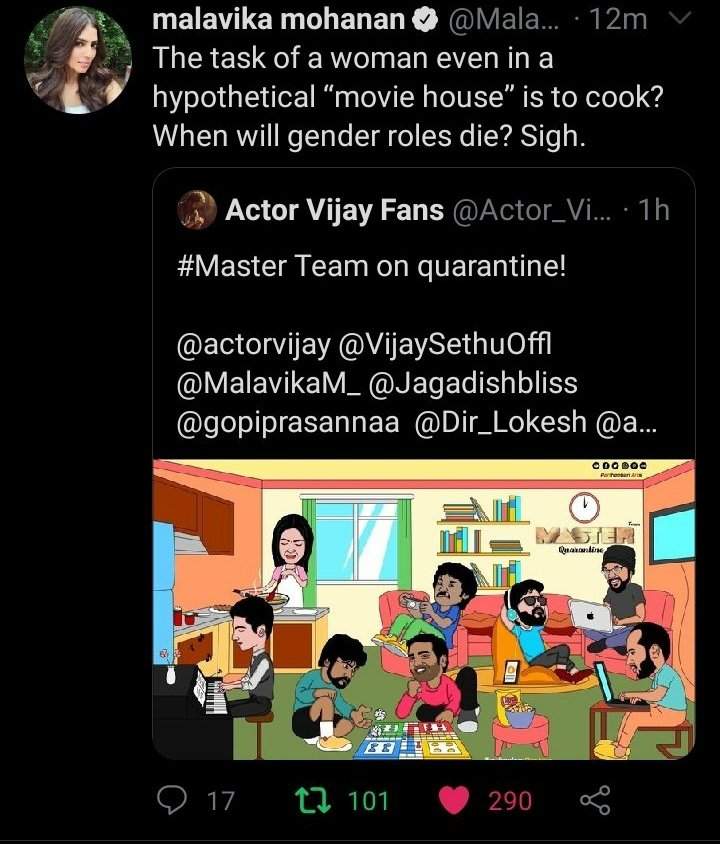 A few days ago, a video of Jyothika's speech from an award show received flak from religious groups. In the video Jyothika said that while she was shooting for the film Raatchasi, she visited a very famous temple in Thanjavur, Tamil Nadu during the shooting. She spoke highly of the temple and said it looked like a palace. Next day, when she was shooting for a scene in a hospital in the same city, she noticed how badly maintained it was. She went on to request people to donate to hospitals, the same way they donate to temples, as hospitals are more important for people to survive. Her view, however, invited hate messages on social media. Religious groups said that she has hurt sentiments and asked her to apologise. Although she hasn't given an official statement, she has received support from fans who said nothing is wrong in what she said.

Clarification on actress Jyothika controversy,
.
There was nothing wrong in her statement, she has said only to maintain hospitals the same way as temples, she NEVER SAID NOT TO PUT MONEY IN TEMPLE HUNDI and she NEVER SAID NOT TO WASTE MONEY ON TEMPLES 1/2 ...!@Suriya_offl pic.twitter.com/twCvnM3N6r