Actor Anil Kapoor turns a year younger and wishes started pouring since morning, flooding Twitter and Instagram. Co-stars, industry friends, family and fans did not let the chance go to wish this evergreen star who defies age like no other.

Actor Madhuri Dixit Nene who has been his co-star in a number of hit films including Beta, Tezaab and others shared a picture of them and wished him. Boney Kapoor, who made multiple films with him shared an old picture of the actor on the sets with him. Calling him ageless wonder he wrote: “Happy Birthday to the ageless wonder. The world has aged but you look more younger and fitter with every passing year. the evergreen hero of this era.”

Actor Aftab Shivdasani evoked nostalgic by sharing a picture from the hit film Mr India. Aftab was a child actor when the film was made. Calling him Arun Bhaiya, he wrote: Happy Birthday sir, Stay happy, healthy and blessed always! Love you ‘Arun bhaiya’!

Cricket legend Sachin who is also a fan of the actor wished him with a picture of him taking a selfie. He wrote: “Cheers to a jhakkas 366 days around the sun! I won’t talk in year terms as they don't count in your case anyway! Have a great one and wish you all the happiness and success! 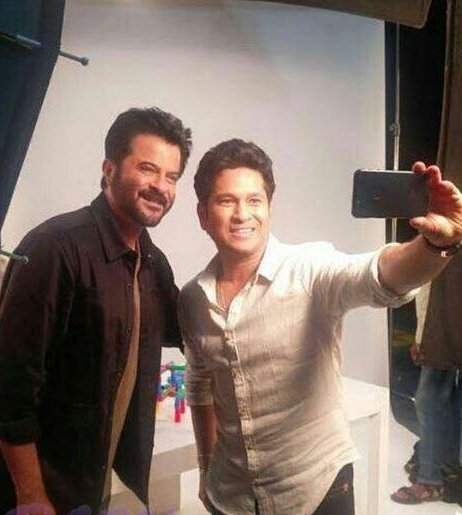 Shilpa Shetty, Ayushmann Khurrana, Sunil Shetty, Vicky Kaushal, Preity Zinta, Huma Quereshi, among others from the B-Town wished him. Actor and activist Shabana Azmi wished him on Twitter after watching his upcoming release AKvsAK that has been creating noise on social media: “Salgirah Mubarak @AnilKapoor. What a pleasure to see you reinvent yourself. Just watched #AK vs AK. Such an edgy new narrative Both you and #Anurag are perfect foils for each other and @VikramMotwane is in terrific form. Mazaa aa gaya. Among the young actors Tiger Shroff wrote: Happy birthday @AnilKapoor sir. One year younger...keep inspiring wish you the best of health happiness always lots of love! Varun Dhawan wrote: Happy birthday @AnilKapoor. U are the youngest member of the #jugjuggjiyo family. The hardest worker in the room and the best at his craft.

One of the unique wishes was from screenwriter Anuruddha Guha who made Anil Kapoor crack up. He wrote: “Who’d believe Anil Kapoor is a day older than Jesus Christ!” The birthday boy retweeted it with the comment that he heard it for the first time and loved it.