After roasting 'woke' Hollywood at the Globes, Ricky Gervais says he will never play host again

Comedian Ricky Gervais says he will never host the Golden Globes award ceremony again. Gervais took to Twitter to hit back at people criticising his Golden Globes monologue this year.

With his post, the 58-year-old insisted that just because viewers were offended by his eight-minute speech "doesn't mean they are right".

"1. Simply pointing out whether someone is left or right wing isn't winning the argument. 2. If a joke is good enough, it can be enjoyed by anyone. 3. It's not all about you. 4. Just because you're offended, doesn't mean you're right," he posted. 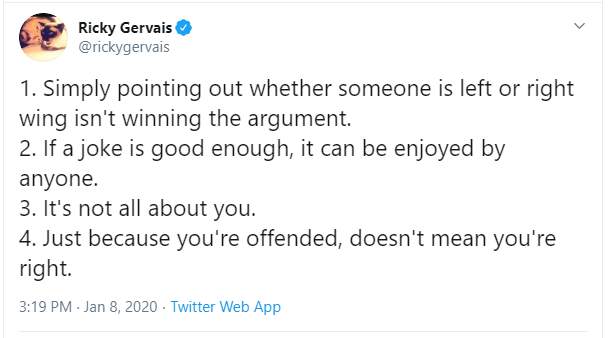 On Sunday night, Gervais took the stage to open the 77th Golden Globe Awards ceremony here with a monologue, through which he poked fun at the 'woke' Hollywood culture.

It came after Gervais took to social media on Monday to respond to an article with fans demanding he return as the host next year.

Keeping his response to the point, he wrote: "Never gonna happen."

His earlier post read: "Thanks for all your amazing comments about my Golden Globes monologue. Best reaction ever and that means a lot to me. I had a blast but thank f*** it's over, so I can get back to my real job of editing #AfterLife2 and touring #SuperNature. Make Jokes, Not War."