LOS ANGELES (AP) — Kobe Bryant, the 18-time NBA All-Star who won five championships and became one of the greatest basketball players of his generation during a 20-year career with the Los Angeles Lakers, died in a helicopter crash Sunday. He was 41.

Bryant died in the foggy hills above Calabasas, California, about 30 miles northwest of downtown Los Angeles, a person familiar with the situation told The Associated Press. A different person familiar with the case confirmed Bryant's 13-year-old daughter Gianna also was killed. Authorities said nine people were on the helicopter and that all were presumed dead. No names were released.

Both of the AP's unnamed sources spoke on condition of anonymity because few details of the crash had been released publicly. The crash happened around 10 am. 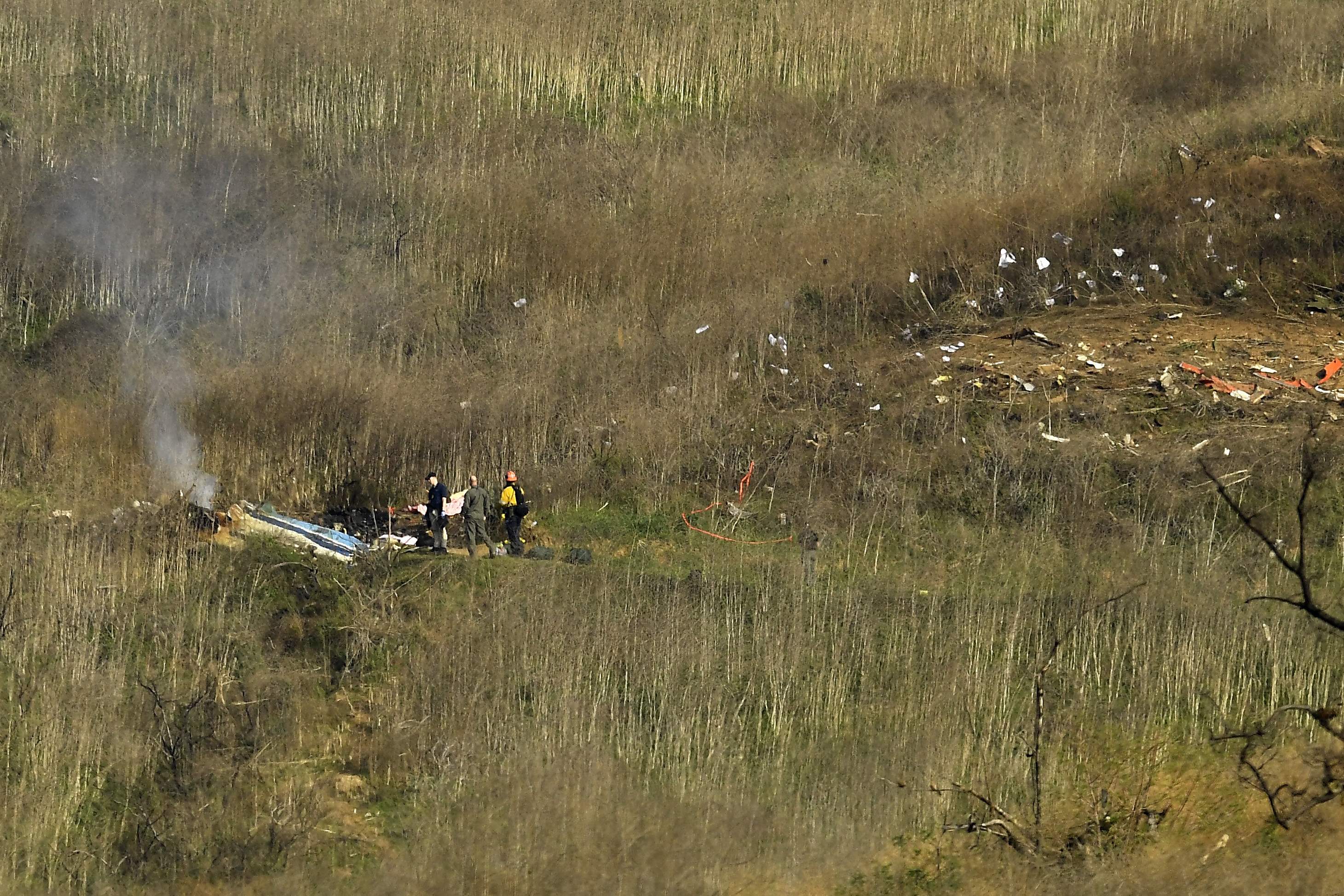 Federal Aviation Administration spokesman Allen Kenitzer said the helicopter was a Sikorsky S-76, and it was not known what caused the crash.

Bryant lived south of Los Angeles in coastal Orange County for much of his adult life, and he often used helicopters to save time and avoid Southern California's notorious traffic. He often travelled to practices and games by helicopter before his playing career ended in 2016, and he kept up the practice after retirement as he attended to his business ventures. 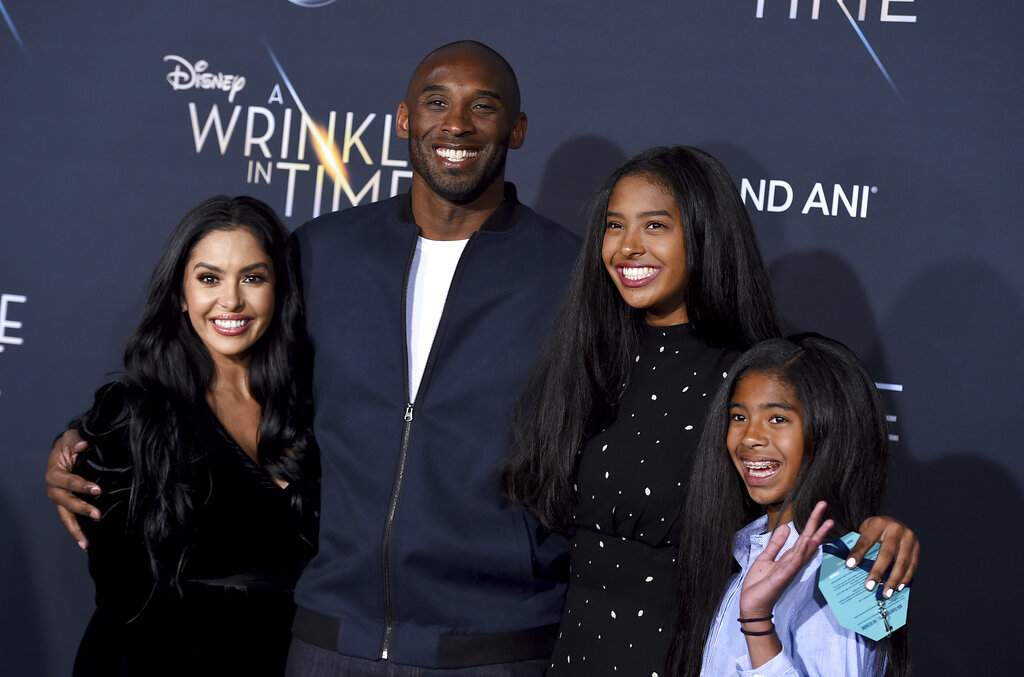 Bryant, who had four daughters with his wife, Vanessa, dedicated himself to boosting women's sports in recent years, coaching and mentoring basketball players. Gianna, better known as Gigi, was a talented basketball player.

Bryant retired nearly four years ago as the third-leading scorer in NBA history, finishing two decades with the Lakers as a prolific shooter with a sublime all-around game and a relentless competitive ethic. He held that spot in the league scoring ranks until Saturday night when the Lakers' LeBron James passed him during a game in Philadelphia, Bryant's hometown. "Continuing to move the game forward (at)KingJames," Bryant wrote in his last tweet. "Much respect my brother."

On Saturday night, James said he was "happy just to be in any conversation with Kobe Bean Bryant, one of the all-time greatest basketball players to ever play. One of the all-time greatest Lakers."
News of Bryant's death inspired an outpouring of grief around the sports world and beyond, but it was felt particularly painfully in Los Angeles, where Bryant was unquestionably the most popular athlete and one of the city's most beloved public figures.

The Lakers' next game isn't until Tuesday night against the crosstown rival Clippers, but hundreds of fans — many in Bryant jerseys and Lakers gear — spontaneously gathered at Staples Center and in the surrounding LA Live entertainment complex on Sunday, weeping and staring at video boards with Bryant's image before the Grammy awards ceremony.

"I thought he was going to live forever," Lakers great Magic Johnson told KCBS-TV. "I thought he was invincible. ... There was nobody who took more pride in putting on that Laker uniform than Kobe. Nobody. He was just special. We will miss him and we'll remember him for his greatness, but let's not forget how he impacted the world, too." 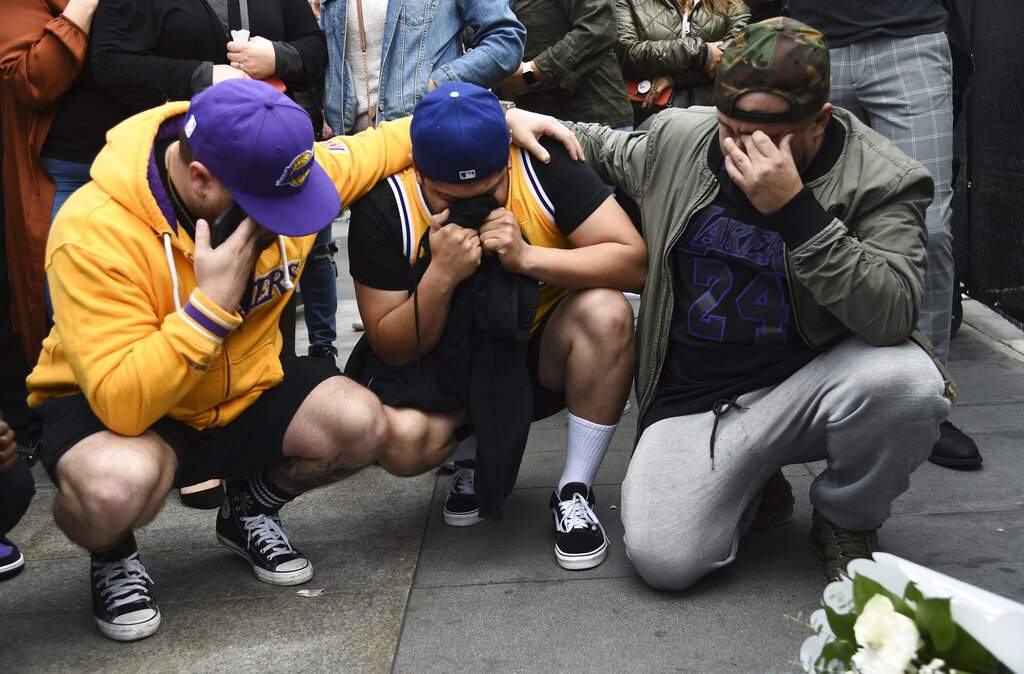 The NBA kept its games on as scheduled when the news broke, but the San Antonio Spurs and Toronto Raptors both took voluntary 24-second shot clock violations at the start of their game in honour of Bryant, who wore No. 24 for the second half of his career.

Bryant opened a production company and entered the entertainment field in retirement. He won an Academy Award in 2018 for his contributions to "Dear Basketball," an animated short about his relationship to the game. He also produced content for ESPN.

In 2003, Bryant was charged with attacking a 19-year-old employee at a Colorado resort. He had said the two had consensual sex, and the charge was eventually dropped. The woman later filed a civil suit against Bryant that was settled out of court. Bryant's adulation remained strong in Los Angeles even during the sexual assault allegations.

Bryant had one of the greatest careers in recent NBA history and became one of the game's most popular players as the face of the 16-time NBA champion Lakers franchise. He was the league MVP in 2008 and a two-time NBA scoring champion. He earned 12 selections to the NBA's All-Defensive teams.

"There's no words to express the pain I'm going through with this tragedy of losing my niece Gigi & my brother (at)KobeBryant," O'Neal wrote on Twitter. "I'm sick right now."

A two-time Olympic gold medalist with the dominant U.S. team, Bryant retired in 2016 after scoring 60 points in his final NBA game. In December 2017, the Lakers hung banners retiring his No. 8 and No. 24 jerseys in the Staples Center rafters in an unprecedented double honour.

Bryant looms large over the current generation of NBA players, most of whom grew up either idolizing Bryant or absorbing his work ethic and competitive spirit in the same way Bryant's generation learned from Michael Jordan. After James passed Bryant on Saturday, he remembered listening to Bryant when the superstar came to speak at a childhood basketball camp.

"I remember one thing he said: If you want to be great at it, or want to be one of the greats, you've got to put the work in," James said.

James later teamed up with Bryant on the 2008 U.S. Olympic team in Beijing.

"He had zero flaws offensively," James said. "Zero. You backed off of him, he could shoot the 3. You body him up a little bit, he could go around you. He could shoot from mid-range. He could post. He could make free throws. ... He was just immortal offensively because of his skill set and his work ethic."