Batch of 2020: From Hrithik Roshan and Deepika Padukone to Anand Gandhi, listen to celebrities talk about their student days

Hrithik Roshan, Deepika Padukone, singer Armaan Malik and filmmaker Anand Gandhi, all these celebrities, and other well-known people from different walks of life are sharing their college stories through the Batch of 2020 documentary film.

Conceptualised and produced by Anto Philip’s Under 25 team, the film tries to encourage and motivate all those students whose graduation year has suffered due to the pandemic. 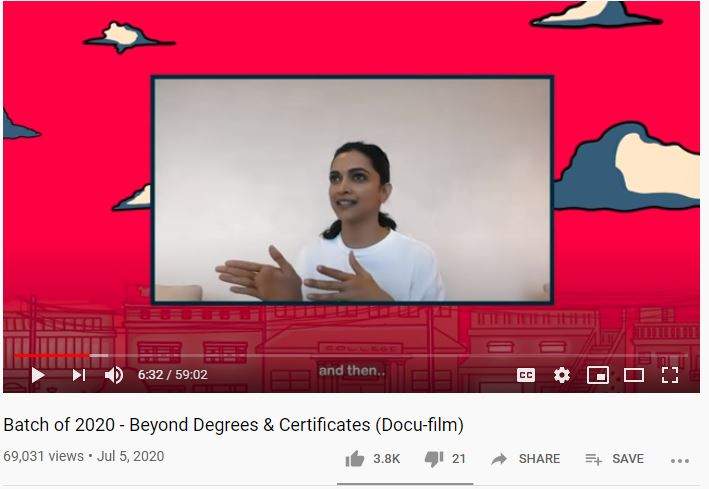 Known personalities from various walks of life are seen motivating students and reminiscing their graduation days, telling students that it’s okay to mess up. Filmmaker Anand Gandhi also motivates when he urges the youth to make every failure a stepping stone to success. In the documentary, we see Anand talk about 'Qualities a graduating student must have in 2020' urging the youngsters to learn skills, equip themselves and to make every problem an opportunity. Well, it just wasn’t Anand’s motivational words, but also others sharing their fun and amazing experiences.

Anand who is known for his documentaries like Right Here Right Now, Continuum and An Insignificant Man, which have won several awards at various film festivals, has also made films such as Ship Of Theseus and Tumbbad.

Batch Of 2020 is a thoughtfully curated film, preparing students in general about the ‘real world’, it brings conversations, speeches, and information from some of the most inspiring personalities in the country. From addressing the pressure of messing up on the educational front to pointing out the importance of degrees and certificates the film is surely a must-watch for the younger generation. The film is now available on YouTube. Watch here.