AFTER A DECADE OF giving hits in Telugu, Tamil, Kannada and Hindi film industries, especially with the success of De De Pyaar De last year, the lockdown wasn’t something Rakul Preet Singh was looking forward to. After all, she had her hands full with a lot films — some were almost over and some were about to begin. But, instead of entering the zone of why and what-if, the actress, who admits to being a hustler, decided to make most of her time during the lockdown by keeping herself busy with workouts, books, meditation, online courses and cooking. She also decided to make most of the time by spending it with her parents and thus came home to Delhi from Mumbai when the airlines resumed service. But, how has the lockdown life treated her and what are her plans going forward. We ask the actress over a telephonic chat. Excerpts:

Q: How has life in lockdown been for you?
I would be lying if I say it’s not been good. I have always been a hustler but when there is a situation like this (COVID-19), either I could get really depressed or do something with my time. I chose the latter. I still have a routine. I wake up at 5.30 am every morning and workout. I have been doing stuff that I never had time to do — like taking an online crash course for MBA and an entire course on meditation. Plus, I have been doing yoga and reading and I am so busy with all these things that actually my days fly by. 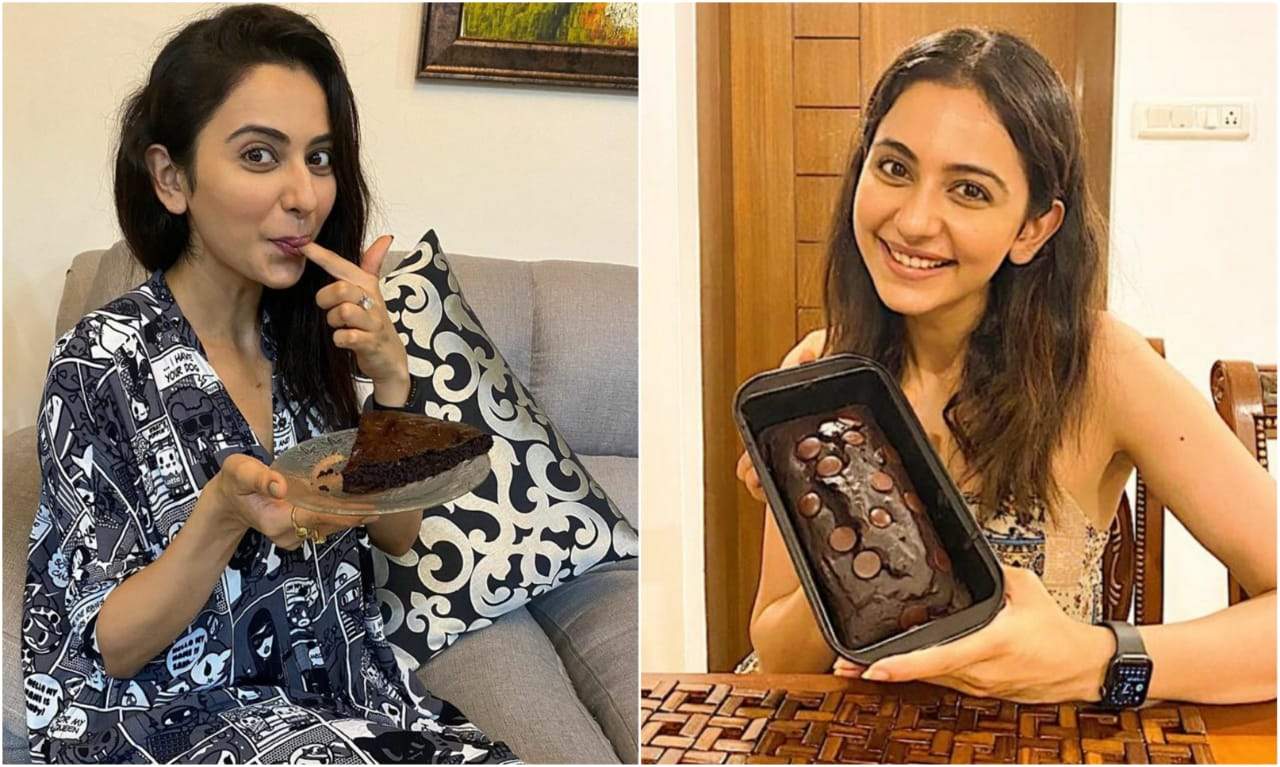 Q: Did you take up a new hobby? We saw you baking a cake...
The latest addition is cooking. I am a clean eating foodie and I always had a recipe folder on my phone but never had the time to experiment. Now that I have time, I have been experimenting and my parents were very proud after they tasted the food that I made. I have been making Asian and Thai food, so I made dishes like pad thai (stir-fried noodles) and coconut milk curry with daal and vegetables.

Q: You recently turned vegan. How is the transition?
I was a non-vegetarian all my life and there was always this feeling within me that I do not want to eat meat for a while, I wanted to turn vegetarian and cleanse my system. After 10 days, I really started liking it and realised that I could eat a lot more. I was going back to the basics — daal, roti and rice. It did wonders for my body and I started feeling a lot better. I might have a change of heart later, you never know, but for now, I am enjoying being a vegan.

Q: Being a vegan, what does your diet include in a typical day?
I eat everything that I ate while growing up. I just don’t do gluten, dairy and sugar. I keep experimenting with my breakfast because I am a foodie and I don’t like eating the same thing every day. My breakfast is poha or avocado toast or smoothie or uttapam or dosa. My lunch is usually rice, my rotis are made from rice flour because it is the best form of carbs for your body and I eat my carbs every day, even at night. Except when I need to lose weight for a particular project, I eat everything, including parathas.

Q: What were you shooting for before the lockdown was announced?
I was filming four projects. One is with Arjun Kapoor, which is being produced by Nikhil Advani. It is untitled. I was also shooting for Attack with John Abraham and only one week of the shoot was left. I was going to start shooting for a film with Indrajith Sukumaran and another with Ajay Devgn sir, which is untitled, in April. So, overall, I have about six films to start when lockdown ends. 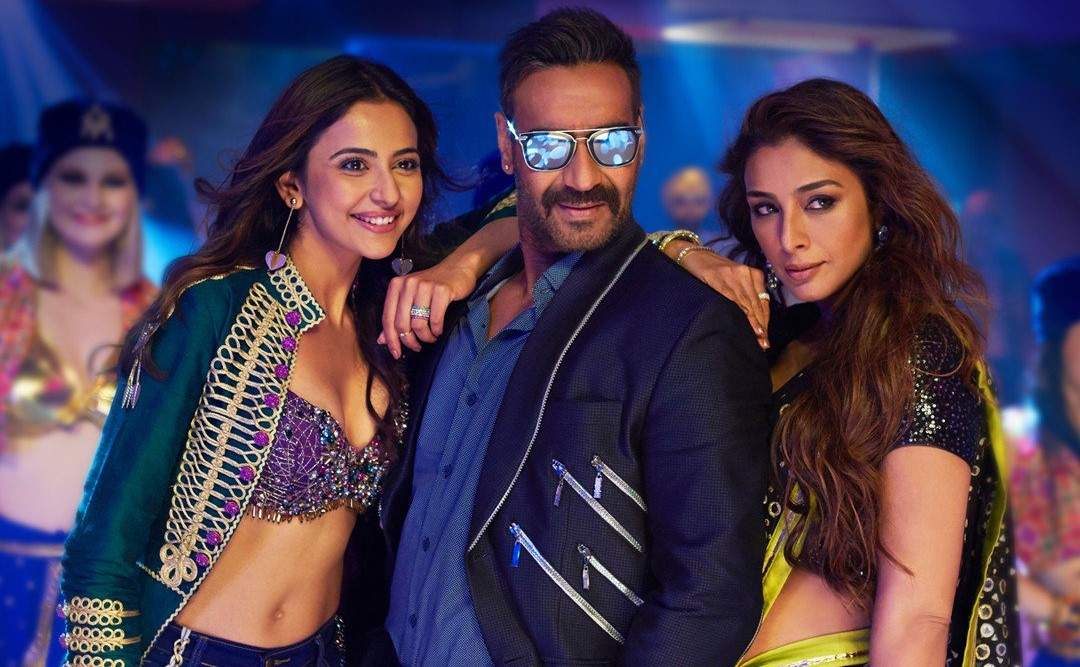 Q: How important has De De Pyaar De been to your career, especially in Bollywood?
It is a very important film for my career and I cannot be thankful enough to the team for having faith in me to play Ayesha and acting alongside Ajay Devgn and Tabu. I think Ayesha was a very well-written role and despite the fact that she is dating a guy who is 50 years old, it never comes across as a frivolous character. It was a commercial film but I really liked the fact that it talked about something so relevant and needed in our society today — love doesn’t have a barrier. The film did very well and if this pandemic hadn’t happened, it would have been an adrenaline rush of the film after film.

Q: In one of your earlier interviews, you mentioned that no one knew you in Bollywood. Have things changed after De De Pyaar De?
Despite the fact that I had done over 25 films in the South, not many people in Bombay had seen them and thus weren’t aware of my body of work. But, I think that has changed now. I don’t have to re-introduce myself. I got a lot of appreciation for my role from the industry itself and that gave me a boost of confidence. It did bring certain momentum. In the bigger picture, I hope it gives me more opportunities.

Who says you need a gym to burn that fat !! And now you have all the time in the world too ! Make the most of this guys ! 30 mins of this and your workout is done ! Schedule given by @toughtaskmaster share your home workouts and tag me #jantacurfew #stayhome #staysafe #staystrong

Q: You are a fitness enthusiast. What’s your workout routine?
I am so glad you called me a fitness enthusiast and not a freak! Because I am not a freak, I am just passionate about fitness. It’s not something I do because I am shooting. Fitness for me is a way of life. Even in the past 30 days that I have been in Delhi, I have been working out every morning. I guess I get it from my dad because he is from the army and I’ve never seen him miss his workout. In fact, during the lockdown, I have extended that time I used to dedicate to yoga since the gyms are closed. In the last few days, I have been playing badminton at home and some weight training that can be done at home. I mix and match but I do at least two forms of workout in a day.

Q: After starting your chain of gyms, what’s next in terms of business?
I don’t know what is next, but whatever I do it will be related to fitness, food, films. Things I understand — the three ‘Fs’ of my life.

Q: Lastly, is marriage on the cards? What is it that you are looking for in your ideal man?
I believe in love and the idea of marriage. Sometimes my friends joke that I should have been born in the ’70s because that’s when the true love existed (laughs) but I truly believe that you attract what you seek. For me, what’s important is that the person should have a passion and a drive in life. That is something that doesn’t die. The passion can die, the relationship can die, but if that person has that zest for life, then I will always be happy. He should be intellectually stimulating. Of course, he should be taller than me even after I wear heels. My parents have been asking me to find someone so that I can eventually get settled.

The thing is that I have always been busy with work but now that I have had free time, they are putting a little pressure on me. But then I put it back on them. I say, ‘Dad, you have set the standards really high’ (laughs)... I think every guy should be given military training so that they can transition from being a boy to a man. 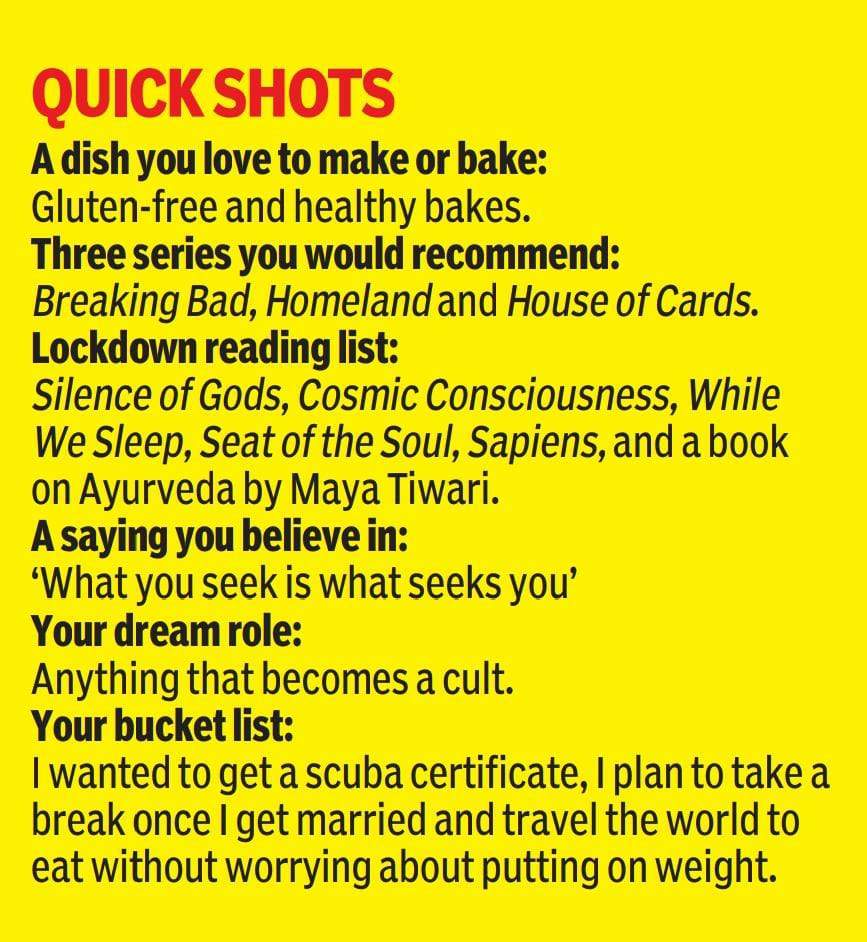