Kannada film actor Chiranjeevi Sarja passed away on Sunday. Reports suggest the actor had developed breathing issues and was immediately rushed to a hospital and was admitted. However, the actor breathed his last after a massive heart attack. Doctors are yet to release an official statement.

Chiranjeevi was actor Arjun Sarja's nephew, and had debuted in the 2009 film Vayuputra. The actor had worked in over 20 films like Chirru, Chandralekha, Aatagara, Bharjar, Seizer and Amma I Love You. He acted last in the film Shivarjuna.

The 39-year-old actor was known not just for his acting but also for his action in his films. Chiru as he was fondly called was born in Bengaluru, and started his film career as an assistant director to his uncle Arjun Sarja. He got married to actress Meghana Raj in May 2018.

The Kannada film industry is shocked to know about his untimely demise. Here are a few reactions from celebrities on Twitter: 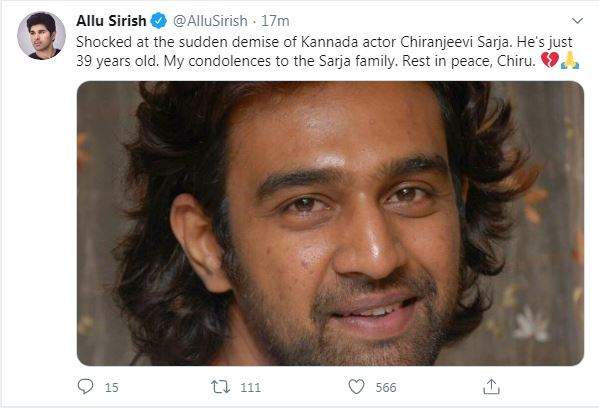