Prime Minister of India, Narendra Modi, expressed his grief over Sushant Singh Rajput's death. The PM tweeted from his official handle saying, "Sushant Singh Rajput...a bright young actor gone too soon. He excelled on TV and in films. His rise in the world of entertainment inspired many and he leaves behind several memorable performances. Shocked by his passing away. My thoughts are with his family and fans. Om Shanti.” 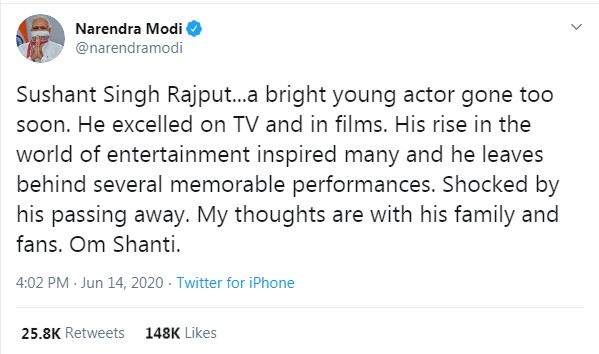 According to the police, the 34-year-old actor was found hanging at his residence in Bandra and a domestic help alerted the police.

Earlier in the week, Disha Salian, Sushant Singh Rajput's ex-manager reportedly committed suicide by jumping off from the 14th floor of her apartment in Malad, Mumbai.

After starting his career with television, where he gave an award-winning performance in soap opera Pavitra Rishta, Sushant made his Bollywood debut with Kai Po Che! (2013). The actor was last seen in Chhichhore (2019) but the one performance with which he touched millions of hearts was when he played the titular role in biopic M.S. Dhoni: The Untold Story (2016).