Actor Sushant Singh Rajput's death has opened a can of worms in Bollywood. Many other actors have called out the nepotism and bullying that exists in the Hindi film industry and how this could have been a reason for the actor to take this extreme step.

Now, filmmaker Abhinav Kashyap, who directed the 2010 film Dabangg has posted a long note on social media calling out talent management agencies. He says it's the nexus between such companies and a few big production houses that corners artistes into agreeing to all their terms and conditions. He also says that this extreme bullying kills the self-confidence of aspiring artistes and filmmakers. Abhinav who is filmmaker Anurag Kashyap's brother has shared this post on Facebook, in which he says, "The suicide of Sushant Singh Rajput brings to the forefront a much bigger problem of what many of us have been dealing with. Exactly what might compel a person to commit suicide?? I fear his death is just the tip of the iceberg just like the #metoo movement was for a much bigger malaise in Bollywood." He adds further, "The death of Sushant Singh Rajput brings under scanner the role YRF talent Management Agency might have played in pushing him towards his suicide but that is for the authorities to investigate. These people don't make careers. They ruin your career and life. Having suffered personally for a decade, I can confidently say every Talent Manager and all Talent Management Agencies of Bollywood are a potential death Trap for Artists. They are all basically white collared Dalaals and everyone is involved. They all have an unspoken code of conduct they adhere to..." 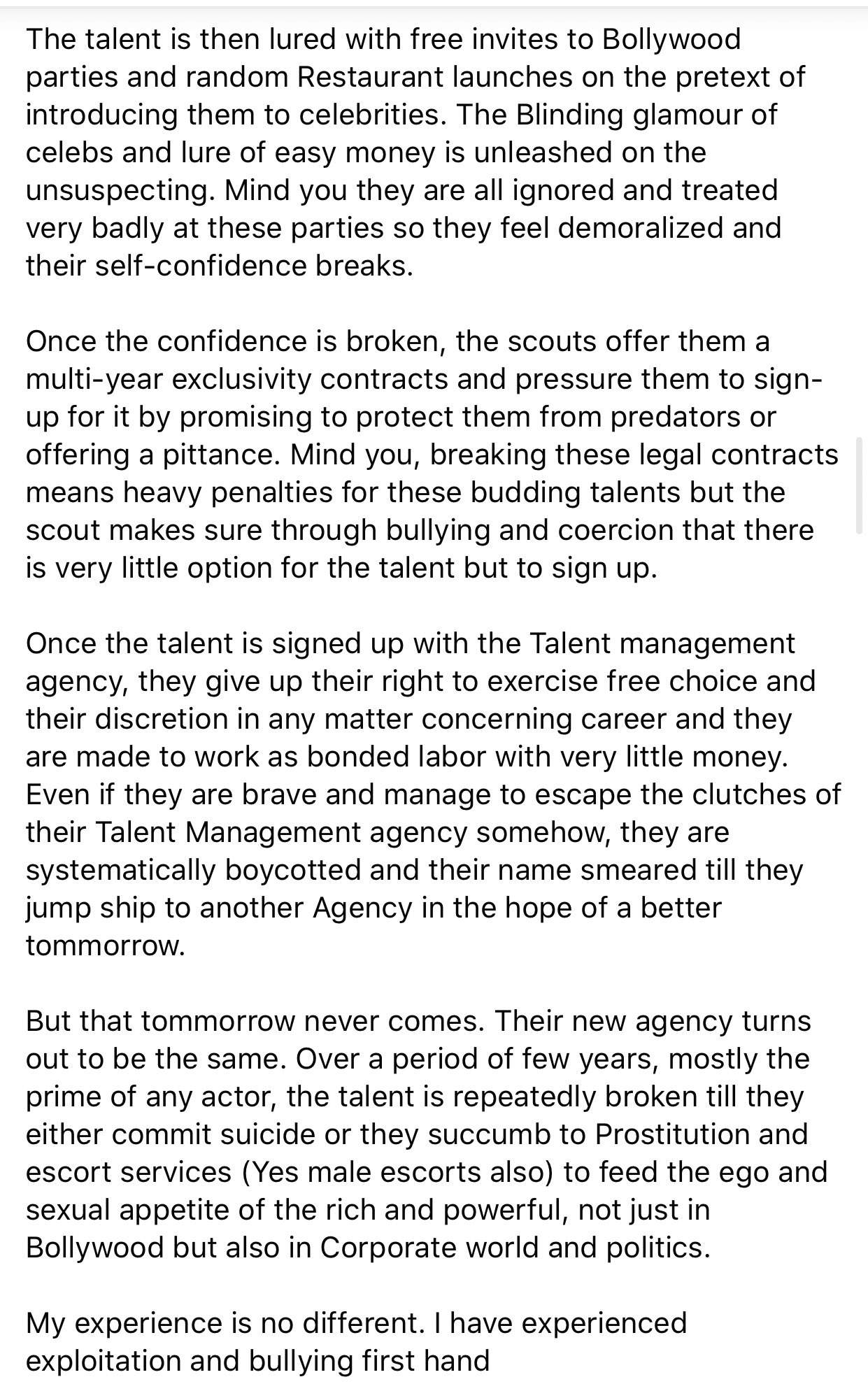 Abhinav has also called out Salman Khan's family on social media, alleging them of sabotaging his career. "My experience is no different. I have experienced exploitation and bullying first hand Arbaaz Khan on Dabangg and ever since. So here is my story 10 years after Dabangg.
"The reason I moved out of making Dabangg 2 ten years ago is because Arbaaz Khan in collusion with Sohail Khan and family was trying to take control of my career by bullying me. Arbaaz Khan sabotaged my second project with Shree Ashtavinayak Films that I was signed up with by personally calling their head Mr. Raj Mehta and threatening him with dire consequences if they made a film with me. I had to return the signing money to Shree Ashtavinayak films and moved to Viacom Pictures.
"They did the same thing. Only this time the sabotager was Sohail Khan and he intimidated the then Viacom CEO Vikram Malhotra. My project was sabotaged and I was made to return my signing fee of Rupees 7 Crores plus interest of Ninety odd lacs. Its only then that Reliance Entertainment came to my rescue and we forged an enduring partnership for my film Besharam. But lo behold... Mr. Salman Khan and family sabotaged the release of the film and got their PROs to run a sustained negative smear campaign against me and my film BESHARAM before release." 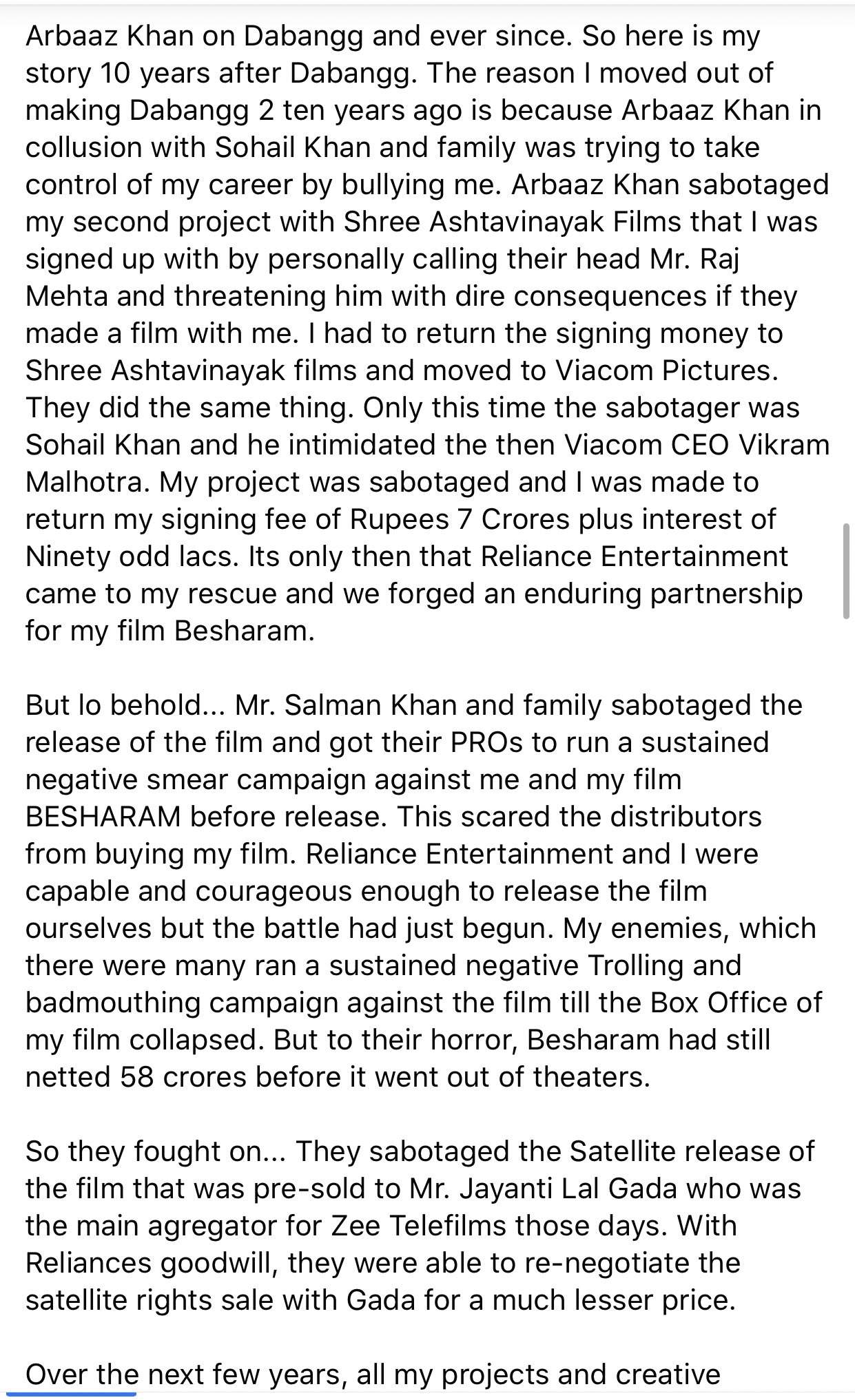 Abhinav has openly challenged Salman and his family members saying, "I know who my enemies are. Let it be known that they are Salim Khan, Salman Khan, Arbaaz Khan and Sohail Khan. There are many other small fry's but Salman Khan family is the head of this venomous serpant. They use a clever mix of their ill-gotten money, political clout and connections with the underworld to intimidate anyone and everyone. Unfortunately truth is on my side and I am not going to give up like Sushant Singh Rajput. I refuse to cow down and will fight on till I see the end of either them or me. Enough tolerance. Its time to fight back. So this is not a threat, it's an open challenge." 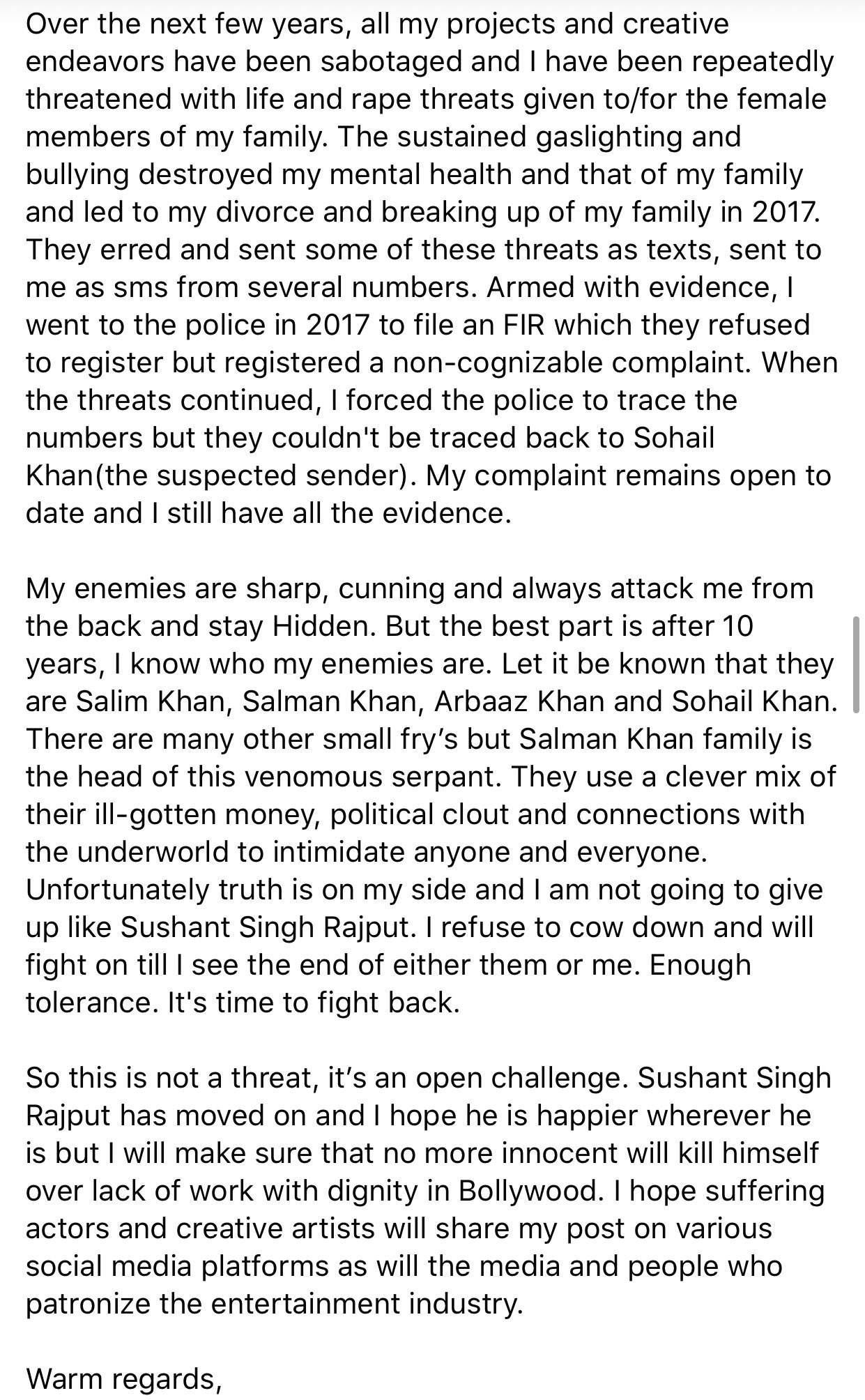 He concludes the note hoping Sushant is in a better place, and that up and comping artistes must not suffer, "Sushant Singh Rajput has moved on and I hope he is happier wherever he is but I will make sure that no more innocent will kill himself over lack of work with dignity in Bollywood. I hope suffering actors and creative artists will share my post on various social media platforms as will the media and people who patronize the entertainment industry. Warm regards, Abhinav Singh Kashyap Please share and forward this as much as you can. #metoo #BoycottSalmanKhan."