It's been eight years since the epic film Gangs of Wasseypur I released. Directed by Anurag Kashyap, the narrative set during the 1940s India followed the coal mafia in Dhanbad and looked at the power struggles and politics involving three families. It featured Manoj Bajpayee in the lead role, opposite Richa Chadha, and other actors such as Jaideep Ahlawat, Tigmanshu Dhulia and Pankaj Mishra portrayed key characters.

Celebrating the film, actress Richa posted a scene from the film on her social media. However, long tribute messages are not her style, the meme-queen that she is, she reworked her character Nagma Khatoon's wedding scene from the film to resonate with weddings in times in Corona.

The meme speaks of the rule by the Government - "Only 50 guests allowed at a wedding," followed by the eerie silence by Richa in her character. Her post read, "2020 saw me postponing my shaadi, rightly so, cuz this is such an unpredictable, manhoos year ! Here’s some #NagmaSwag for you, from the film that started it all for me! Enjoy. (sic)." 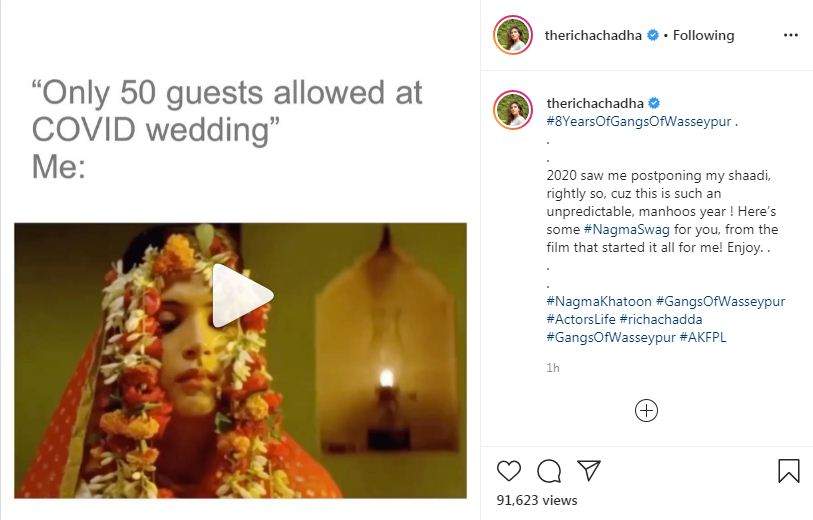 Richa and her long time boyfriend Ali Fazal were to tie the knot in April, as per reports. But the actors' wedding had to be postponed due to the unforeseen situation.