Sonam Kapoor has been quite vocal on social media, particularly her Twitter account. Whether it is something about her films, the film fraternity or social causes, the actress doesn't shy away from speaking her mind. The actress is now actively raising awareness about the safety measures laid down by the Indian government and the World Health Organisation.

Coming forward to show her support to our frontline warriors, Sonam Kapoor Ahuja is urging fans to donate masks to Mumbai Police who are risking their lives every day to keep citizens of Mumbai safe and guarded. Sonam shared a special video on her Instagram handle and wrote, "Hi guys! So a team of people have come up with an excellent initiative of collecting funds to give @mumbaipolice the best available and most effective masks(n-95) at the best available price. By donating Rs 300 you can protect an officer for 3 months! Please please contribute." The initiative has been started by EUME (An Avon Lifestyle Pvt. Ltd. Brand) to help our frontline heroes. 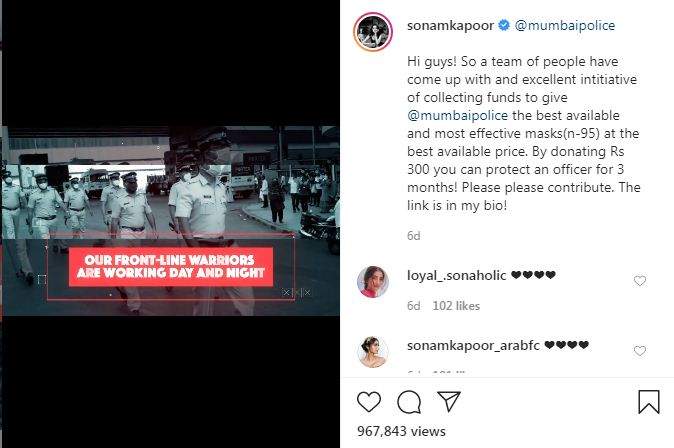 In addition to this, Sonam has been donating to various organisations including the Chief Minister's Relief Fund, International Association For Human Values which helps thousands of daily wage earners, Khaana Chahiye which is a citizen initiative to fight hunger along with a special fund set up by Producers Guild Of India to assist cine workers. Apart from this, she has also been urging everyone to make contributions in whatever manner they can.

On the work front, Sonam who was last seen in the romantic comedy, The Zoya Factor opposite Dulquer Salmaan, is prepping for the remake of the Korean film Blind.