TV actress Sana Khan, more popularly known as one of the popular finalists on Bigg Boss, had announced her break-up with choreographer Melvin Louis in February earlier this year accusing him of cheating. However, now, Melvin has posted an audio clip, allegedly a conversation between him and Sana, to present his side of the story.

Here's an excerpt from the conversation clip that's posted on Instagram, a female voice, presumably Sana's says, "I have to humiliate you! The point is, to feel better, publicly!" A male voice, supposedly Melvin's, says "I am very sure that that is your intention," and seconds later, the female voice continues, "yeah, yeah, that is my intention." The male voice continues "because you are wondering now what? Abhi how will I go and correct my image out there. Why have I left Melvin? Let me say that he is gone out there and he is cheated on me. Is that your plan?" The female voice replies, "Yeah, Yeah that is my plan?"

Melvin captioned the post saying, "You mocked me ! You mocked my race and my skin color ! You mocked my family ! You mocked my most favourite people with disgusting allegations ! You did your best ! I hope you feel better now PUBLICLY ! #MenAreVictimsToo #YouAskedForIt #NotGuilty #BulaatiHaiMagarJaaneKaNahi .
.
.
.
P.S : For all those who didn’t judge too quick or jump to make quick conclusions , I remember your names and you have my respect ! Thank you for not judging a book by its cover. #LoveAndRespectToAll #PooraAudioNoteSunogeTohGirJaaoge #BasAbhiDoneZyadaDramaNahi 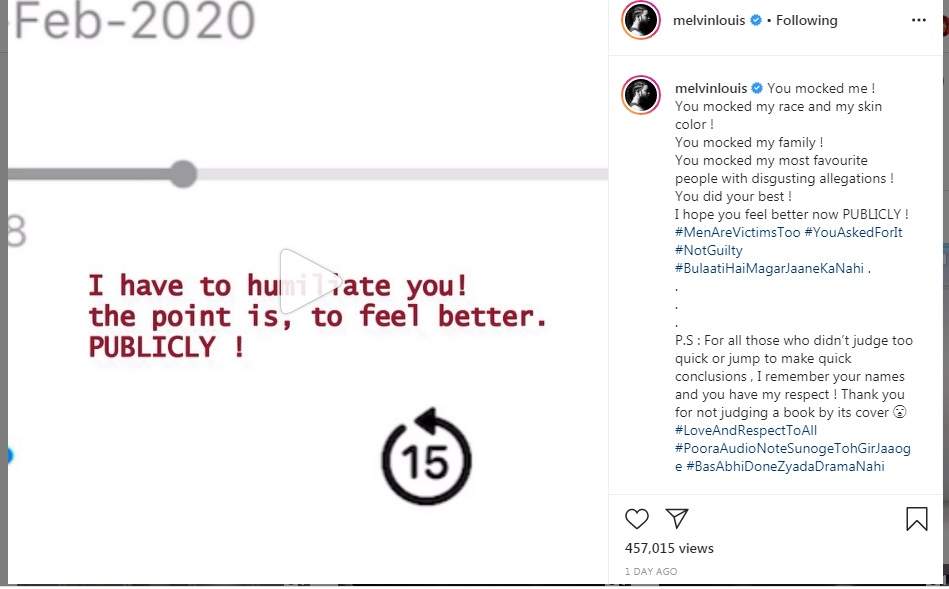 A day after this clip was released, Sana has reacted today. In an exclusive interview to a web portal, the actress says, this is "blackmailing." Talking to the website, Sana said, "This is blackmailing... A lot of people felt that it was a phone conversation that was recorded but it was not. I was there standing right in front of him while I was breaking up with him...It went for two hours because he was still trying to console me and say, 'I love you' and all. He thought he's going to brainwash me but I was in no mood to take that s***."

Such an ugly break-up comes as a surprise to both their fans, considering the couple was quite open about their relationship and their social media posts painted a rosy picture.