Hasmukh will continue to stream on Netflix; Vir Das thanks Delhi HC for dismissing plea against the series

Vir Das' latest series Hasmukh can continue to be streamed on Netflix. The Delhi High Court on Tuesday declined to grant an interim stay on the show. A plea had been filed in the Delhi HC claiming the fictional series maligned the reputation of advocates.

The actor-comedian thanked the court and posted a long message on his social media pages. It reads:

"Yesterday in the Delhi High Court, in the middle of the pandemic, there was a hearing. A hearing about my show where a fictitious comedian does jokes about a fictitious lawyer. Close to 10 legal notices, a suit for 'defaming the reputation of lawyers', political pages organising to down-vote it on IMDb. Fair game. As artists, we were taught to accept feedback humbly, and I do so, knowing that my work always has, and will polarise people. But since these actions go a little beyond feedback, I hope I’ve earned the right to respectfully respond."

The statement further read: "I have spent a decade of my life trying to make this country laugh. I certainly haven’t always succeeded, but I have heard enough laughter and seen enough happy people to know, that comedy of all genre, does more good than harm. Offence is taken, not given. I humbly thank the High Court for their support." the statement further read. 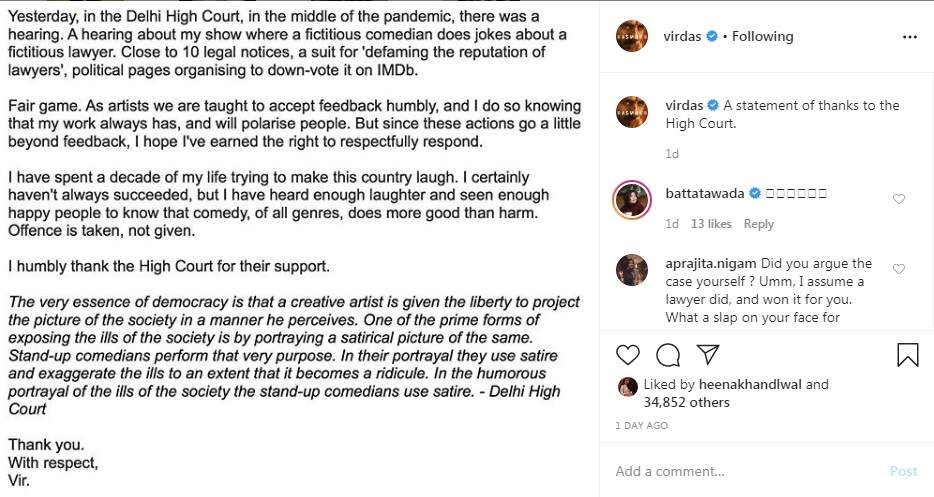 The main petition sought permanent injunction on the airing of the show. It is now pending and listed for hearing in July. Netflix was represented by advocate Saikrishna Rajagopal who said the injunction on the show would contradict the freedom of speech and expression guaranteed by the Constitution. Justice Sanjeev Sachdeva dismissed the application moved by lawyer Ashutosh Dubey.

Vir's Hasmukh is one of the top shows on Netflix India. The story follows its unlikely hero Hasmukh Sudiya who hails from Saharanpur in Uttar Pradesh. After working for years as an apprentice for a local stand up comic where he is reduced to doing the chores of fetching pakodas and ironing costumes, he decides to take matters in his own hand. In a fit of unexpected rage, he ends up killing his mentor. The murder makes him transform from a stuttering, under-confident, scared man to a hilarious comedian whose jokes are capable of bringing the house down.