Exclusive! Aparshakti Khurana: ‘My aim is not to become an A-lister but to spread happiness with my films’

AFTER GIVING LIFE to the ‘hero ka dost’ in innumerable movies and doing justice to each one, Aparshakti Khurana is finally ready with a lead role in the upcoming movie, Helmet. Not surprisingly, the actor is elated. While Helmet is a big step in his career, what’s surprising is his awareness of being in a rare space, as he gets to live the dream of being a lead actor and move up from the space of supporting roles, without getting bogged down by the fear of being typecast. In a no-filter conversation, Aparshakti gave us a peek into his life before and during the lockdown, while tracing his journey from the corridors of the Delhi High Court to the film sets. Excerpts from the interaction:

Q: You started your journey as a lawyer before you joined radio, did theatre and eventually landed on film sets. How did it all fall into place? And, what would you call as your turning point?
Honestly, I don’t know how! I stopped planning life about eight-ten years ago and ever since then, things have been quite hunky-dory and I am quite settled in the head. The turning point was probably my shift from Delhi High Court to a radio station in 2009 because, since that day, I have had the best days of my life. I have never gone home unsatisfied during my radio, theatre and now film days.

Even today, while I would love to be in front of the camera as a frontrunner, I don’t remember this being a central thought in my head ever. I am absolutely satisfied with what I have right now and this doesn’t mean that I am not ambitious or want to strive for something big in life. I just want to acknowledge that there are many actors in the city and across the country who would want to do what I am doing. So, I should be happy about the fact that I have a camera in front of me, and an audience that wants to watch me.

Q: What makes you this content in life?
My aim is not to become an A-lister, my aim is to spread happiness with my films, not only to the audience but also on sets or on calls when I am taking a narration. And, while a YRF or a Dharma film would make one happy, it is equally important to find happiness in little things, which are non-materialistic, which have nothing to do with your social status or bank account.

Q: You film journey began with Sanjeev Sharma’s Saat Uchakkey and, since then, you have done a lot of supporting roles, mostly playing the ‘Hero Ka Dost’. Did you ever fear getting typecast?
A couple of months ago, I met somebody at the airport who had come to take a selfie and said, ‘Aapne jo hero ke dost do respect di hai na wo aaj tak kisi ne nai di…’ And, that made me really happy. For me, there is nothing like being typecast. It is either a good film or bad film, good content or bad content… when you do bad content, you get typecast. When you do good films, you are always in your zone. And, you must capture that zone!

Q: Tell us about your upcoming film, Helmet. Any tentative timeline for its release?
It is a really nice, happy, family film on the subject of condoms. It highlights how, even in today’s day and age, where we have a strong education system, going to a medical store and asking for a pack of condoms makes a lot of people uncomfortable. Apart from me, it features Pranutan who is absolutely amazing, and Abhishek Banerjee and Abhishek Verma. I think we were a really good team, and we executed what was written on paper well.

The original release date was July 3 but from what I hear from the film fraternity, it will be around Diwali, when we will be able to release it. But I am not very worried about that because we have a bigger problem before us. My film can definitely wait, everybody’s health and lives are way more important than any film.

Q: When did the music bug bite you? Who were your early influences?
During our growing up years, my father used to play the flute, I used to play the guitar, bhaiya (Ayushmann) used to play the harmonium, we would all sit and jam. So, music started that time but none of us has taken any sort of training and this is something that comes out of sheer passion and it just got polished over time.

I have always listened to Punjabi music, especially folk, and I am a big fan of Gurdas Maan,  Malkit Singh and Surjit Bindrakhia.

Q: Tell us about your recent music track, Teri Yaari. How did that fall into place? Can we expect more music from you after the lockdown?
It is a track that celebrates friendship. Honestly, we hadn’t planned it, it just happened. I had gone to T-Series office for my second song and by chance, Millind Gaba and King Kaazi happened to be there and when someone suggested that we should collaborate, we all were on board. I love Milind’s work, especially his song, Yaar Mod Do. So, it all fell into place without trying too hard. This lockdown did give me a lot of time, and I am ready with about four songs. I will release them one by one. The first one would be a love song.

Q: We recently heard your short story, Hisab Barabar and liked the storytelling. Do we see you getting back to stories, perhaps through a podcast?
It was written for a pilot show, which  I was supposed to start five years ago but couldn't since it was around the same time that I got a call for Dangal and I had to quit radio. But, I always wanted to tell stories and now that I had time on hand, I thought of revisiting it and, thankfully, people liked it. When it comes to doing podcasts, I did get calls from two really big portals for but we are still figuring it out.

Q: Your fashion game is always on point. Where does this sense of style comes from?
I am a big sucker for fittings, especially when it comes to suits and formals. Secondly, I love experimenting with my colours, jackets, suits and sunglasses. I think this fondness for clothing is something that I have got from my father. When we were children, he would take us out for shopping every single weekend. He is the one who has always been very stylish.

Having said that, I think success is stylish and to what extent your experiment will be accepted by people depends on the success your work has been receiving.

Q: Lastly, how has marriage shaped you?
My life is similar to my father’s. Before getting married, no one took him seriously, and his hard work wouldn’t yield as many results, and the same happened to me. Earlier, I would keep calling production houses to try my hand at anchoring, but nothing materialised. But after I got married, it all shaped up very beautifully without me trying that hard. Whatever little I have achieved today is only because of the presence of this nice, happy soul in my house, who has brought in a lot of positivity and happiness in my life. I had heard about lady luck, but never imagined that things would become this way… 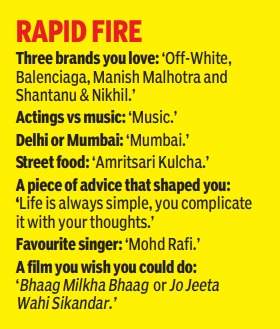