'Working with Anurag Kashyap was too distant a dream': Roshan Mathew on Netflix film, Choked

It was around this time last year that an elated Geetu Mohandas proudly announced that Roshan Mathew's extraordinary performance in her directorial, Moothon, had landed him a role in an Anurag Kashyap film. Titled Choked: Paisa Bolta Hai, the trailer of the thriller dropped earlier this week and is set to premiere on Netflix on June 5. “If it was up to me, I wouldn’t have announced it at all. My plan was not to tell anyone because, in the past, I have had some big opportunities that I have spoken about and have not worked out. The disappointment that comes with something like that is too much to cope with. So I'm quite superstitious when it comes to these things. But Geethu, being the good friend that she is, was so excited that she broke the news," begins the 28-year-old, as he took some time out of his lockdown routine in Kochi to discuss his foray into Bollywood, love for theatre and realising his dream of working with Anurag Kashyap.

How does it feel to make your Bollywood debut? Was that your plan all along?

Very honestly I haven’t thought about it. A Bollywood film was not there in my wildest dreams. After I finished my course at the drama school, I stuck around for a while. This was in 2014-16, I used to regularly audition for films, ads, music videos, basically any work that could pay me. Back then, I looked at working in front of the camera as an opportunity to get paid more than the theatre would pay. Even then, I never really got anything more than one screen appearance in films. And so I had come to terms with the fact that not just Bollywood but cinema itself maybe is an inaccessible thing. So even a Malayalam film, for that matter, wasn't something that was there on my to-do list. I was just trying to make a living out of acting. Rest all worked out of luck and good fortune.

So you think you chanced upon all this?

Not fully, because I had done the work from my side and it’s not like I walked around and stumbled upon these films. I just never planned my life in a way that I will do a Hindi film, then a Tamil film...like that. The baseline was that I wanted to make a living out of acting and when I did start doing films, I began enjoying it. And now I have reached a point where I want to work with filmmakers and actors who really excite me. So in my head, more than a plan of what to do next or which industry to get into, I have a list of people I would love to collaborate with. And AK (Anurag Kashyap) was definitely on that list and I always thought of it as too distant a dream.

How did this project come about?

AK was involved in Moothon. So it turns out that he watched me on the editing table and told Geetu that he really liked me. In the next two days, he called me up and personally told me that he liked my performance. In the same conversation, he said that he would send me a script and asked me to read and see if I found it interesting. It was just too good for me to believe at that time.

When someone like Anurag Kashyap approaches you with a script, what do you look for in it?

Honestly, I would have done the movie anyway (laughs) no matter what he was offering. That's what I told you about, the list of people I want to work with. I constantly have that in my head and I just have to work with them. It keeps me inspired. I don't have any other plan. Out of that list, whoever calls me, I'll go do anything they want me to do.

Yes, I really would. I have told a couple of the filmmakers in my list that even if they think it's a small part for me, or doubt if I would be interested, I would happily come and do it.

Tell us something about Choked...

Choked is a thriller film but also of a very domestic nature. It's almost fully set inside the house. The movie tells the story of Saritha (Saiyami Kher) and her family. They are a middle-class family who is really struggling to make ends meet. Saritha being the only breadwinner has no option to reconsider her job whereas her husband, who I play, is a failed musician. The story begins when Saritha starts to discover money coming from a drain pipe.

Did you have to prepare much?

That's interesting because I like to prepare, I like to know that I have put in my work. I don't have a set method that I follow for every film. I'm constantly discovering and rediscovering things and I work with a trial and error mentality. I haven't reached a point where I can stick to one particular form of work and say this is how I'm going to approach everything that comes my way. I'm very open to change according to projects especially when I'm working with directors like AK, who clearly know what they are doing.
AK asks not to prepare too much. He loves putting actors back in the middle of the scene and say, ‘go, play’. We were living together when Choked was being filmed. When he saw me sitting with the script one day, he was like ‘that's enough, now stop reading it. Just  come to the set and do it.’ That was his attitude and I was more than willing to experiment. Mainly because I have never done that before and also who better to do it with?

Speaking of which, how was it like to work with him?

It was a very exciting experience. He’s very reckless. He likes to give his actors all the freedom and likes to be in the moment and not to worry about restrictions or script or location or time or anything. It's a very immersive and liberating feeling. I had not done a film like this and also hadn't worked with someone like him before. The amount he pushed me to explore everything I wanted to explore was beyond what I thought was possible.

When you look back at your auditioning days, how far do you think you have come?

I don't think I have reached a point where I can stop and look back at how far I have come. It's only been a very short span of time. I have mostly been lucky to be able to work with really cool people -- people who know a lot about what they are doing. I have been fortunate to associate with people like Anjali Menon, Rajiv Ravi, Geethu Mohandas and now Anurag...and actors like Nivin, Vinayakan, Parvathy...that's basically been the highlight of my career and it keeps me going. Apart from that, I don't think it's been a long enough journey for me to stop and turn back.

Now that you have become busy with films, where does theatre fit in?

Theatre holds a really important place in my life because I think it's what keeps me sane. Maybe because I'm a severely nostalgic person and I started with theatre. The joy I get out of doing theatre, I don't get out of doing anything else. It's not like I have reached such a comfortable position in my film career that at any given point I have existing projects to choose from. Sometimes I have to wait it out. Sometimes I have to sit without work hoping that something good will come my way. At those times especially, theatre is a great standby friend to have because there’s always an opportunity to start working on a play, there are always ideas to develop.

I never really had any plan (laughs). When you make a decision as uninformed and as innocent-sounding as ‘I’m going to make a living out of acting’ you sort of have to accommodate everything into plan A. As I said earlier, I was auditioning for anything that human beings audition for. It didn't matter to me what it was. I was ready to do corporate shows, online ads, anything. I ended up doing theatre more than anything else because it's supremely exciting and also because it's a great exercise to get better at acting. And when films start for you, there are obvious reasons why it becomes a priority. There's so much that comes with films that is difficult to find any other way. So naturally, it started taking up more space. 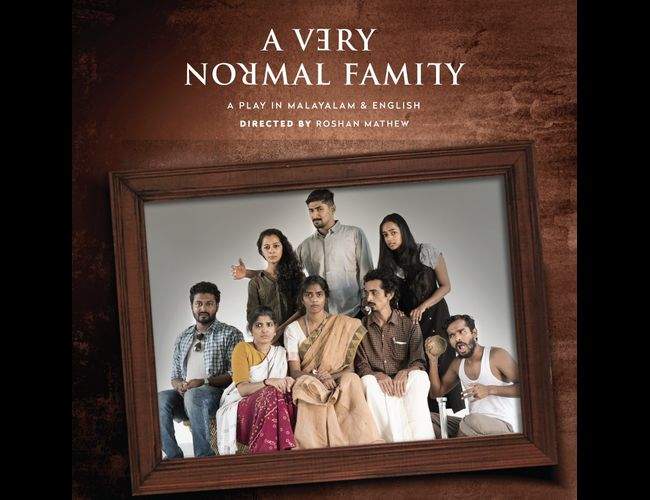 But you did direct a play last year...

Yes! and we did start the work on the second one. Now with the lockdown and all, we don’t know how practical it is to put it out this year but we have started it. Almost everyone in that group comes with the understanding that this is a process that will take off only slowly. In between if for me or for anyone else, a promising opportunity to work in a film comes up, no one will hold them back. So we take a lot of time and come up with a play. The best part about it is that you will never be in a position where you will have to take up a film that you are not excited about out of the lack of options. There's always theatre.

That's cool. But right now, what does the future look like?

That's a tricky question now because of the current situation. One project that I was going to do is now in a very precarious position. We don't know when it will happen or if it will happen at all. There are two very interesting projects which I have committed to, which I'm keeping my fingers crossed for. I’m hoping it takes off whenever it can. There's also Cobra, a Tamil movie with Vikram that I had started shooting for but there is some work left.

Now that your movie is set for a Netflix release, care to weigh in on the ongoing OTT vs theatre debate?

I don't think there's a future where theatres will be completely out of the picture. It's not possible. It's a part of our culture and cannot be extinct that easily. I come from a theatre background which is again similar to cinema halls. On the other hand, when you come from an industry like Malayalam, it may not be that obvious, but if you take Choked, it's essentially a Bollywood film because the language is Hindi. But in Bollywood, I don't think it's ever been easy to make a movie like this with actors like me and Saiyami if it was meant for theatrical release. But because it is a Netflix film and is tailor-made for an OTT platform, it became alright to go ahead with the content. Of course, there is an Anurag Kashyap backing but even then, it would have been a different scenario if the movie was releasing in the theatres.

Choked is set to release on Netflix on June 5.