Keerthy Suresh on Miss India, and her evolution as an actor after the success of Mahanati

For Keerthy Suresh, Mahanati (2018) changed everything. This was the film that announced to filmmakers — and to herself too, in a sense — that she could handle a film all by herself, that she could be relied on to play complex women. On the personal front too, the film proved useful — it showed her father, a producer, and her mother, an actor, that she had it in her to essay complexity, to deliver an arresting performance worthy of a National Award. She admits that the film and its success was a game-changer. The women-centric films followed suit, with filmmakers making a beeline to what suddenly seemed like an evolved version of the old Keerthy Suresh they had known. All this explains how while most actors have lamented the COVID-19 crisis for robbing them of work opportunities, Keerthy has the opposite complaint. “It has been frustrating not getting any breaks,” she says, laughing.

Her latest release, Miss India (on Netflix), was the first film she signed after Mahanati broke open the floodgates. It was the first of many women-centric films that would continue to come her way, says Keerthy, who acknowledges that her expectations as an actor have changed after the recognition of a National Award. “I can’t go back to doing roles where all I have is a song-and-dance routine. However, it’s satisfying to note that after Mahanati, even when I’m approached to play the ‘hero’s girlfriend’, my character now has more meat. There is s sense of purpose. I count it a blessing that I don’t have to get back to roles where I have nothing to do.” Almost as an afterthought, perhaps worried about the signals she would be sending out, she clarifies quickly: “It is not my intention to put down such roles though. At a certain phase in your career, you have to accept them and use them as fodder to rise.” 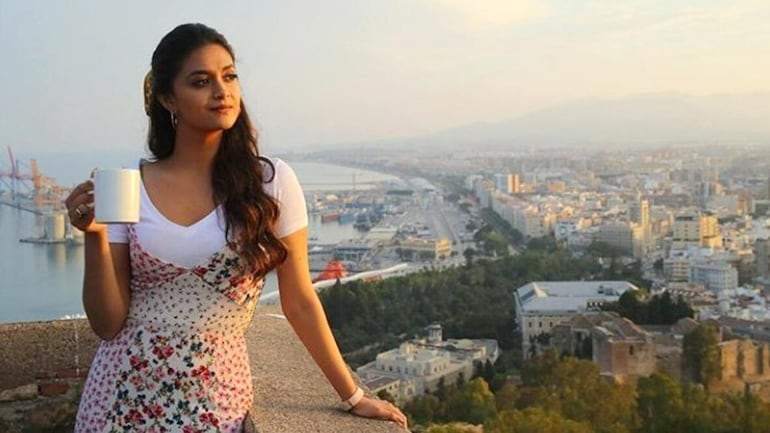 I ask if there’s a negative side to proving yourself as an ace performer in a film like Mahanati. Has it caused filmmakers to think twice about bombarding her with offers to play trivial roles? Has the perceived growth of her acting chops affected the quantity of films that come her way? “The truth is, I’m getting more chances than ever to explore my abilities as a performer. Filmmakers have realised after Mahanati that I can be trusted with serious characters. All my upcoming films, for this reason, are quite different. There’s Good Luck Sakhi (Telugu), Saani Kaayidham (Tamil)… And then, there are the commercial films with Mahesh Babu sir, Rajinikanth sir… You will see that there’s variety across these films. It is a good feeling.”

While Miss India doesn’t exactly make for riveting cinema, it’s still notable for featuring a woman at its centre and for being an unapologetic story focussed on a woman’s ambition. Keerthy denies that the title is a diss at beauty pageants that have traditionally been notorious for being more about the body than the mind, and for, of course, setting unrealistic beauty standards. “We were initially a bit skeptical of the title, as we were not sure if it would pay to mislead audiences. Now, I think all the confusion actually helped the film. The title is a reference to the name of the protagonist’s café. The motive with the title was definitely not to degrade something else. We just wanted to talk about the importance of a woman doing what she’s passionate about, the success or failure of that passion notwithstanding.”

Women-centric films are hearteningly dime-a-dozen now, but it seems like many of them are modelled after the ‘mass hero’ template, including deferential cinematography and slow-motion walk. The question then is, should we demand more variety in these stories, more understanding of what it means to be a woman? Keerthy believes that we are in a phase of transformation and that we will get there eventually. “Think of six-seven years ago when we couldn’t even imagine making these films. Eventually, we will get more variety; there will be more films. Right now, we must notice that we have reached a point where audiences are not rejecting a film simply because it has a woman at its centre. That’s growth. We have come to a point where we are saying that the gender of the protagonist comes second to the content.”

She reiterates that good scripts are now being written for women. “I think the films you are talking about—where a script seems to have been written for a hero but then a heroine has been cast instead… I think even such films are useful because they help open up the industry for women actors. If as a woman actor, I am able to survive in this model, it may result in more women realising they can do the same. I believe that every woman is talented and it’s all about making the most of the opportunities that come our way. If my films help foster such opportunities, I couldn’t ask for more…”

It’s typically said that women writers write better women and given that Keerthy has featured in a few women-centric films made by men, I ask if she’s happy with how they write women. She has no hesitation in saying yes, she’s happy. “They don’t see women as lesser than men. In fact, sometimes when I’m worried if I can pull off certain heroic moments, the directors convince me that I can. These are men trying to make women actors like me better; they are telling us that we too can do justice to the larger-than-life moments. And let’s not forget, these are all filmmakers inspired by the women in their family—and that shows in their films and women characterisation.” There’s a bit in Miss India that shows the protagonist’s relatives dissuading her from pursuing her ambition of running a business. Keerthy says she could relate to such struggles. “People look at my job from the outside and think it looks glamorous. They think it must have been really easy for me, but it has not been so at all. My foremost task was to prove to my parents that I can act, and that I belong as a serious actor. My father was initially worried that I may fail and really, it wasn’t until Mahanati that he was convinced,” she says. “When I would reject films, he would worry that I was letting films go, given the limited shelf life of a heroine. But I would keep telling him that I have something bigger on my mind, that I have bigger dreams. I would tell him that I can think beyond the plans he has laid out for me. All I needed was for him to wait and watch. Now, I think he understands.”