Interview: Gulshan Devaiah on completing a decade in Bollywood and why he has indefinitely retired from theatre

From The Girl in Yellow Boots to Shaitan, Hunterrr, Mard Ko Dard Nahi Hota and Ghost Stories, it has been a decade in Bollywood for Bengaluru boy Gulshan Devaiah. As he gears up for the release of Footfairy, a mystery thriller that revolves around a psychotic obsession with feet, we sit down with the actor to know more about his film, while retracing his journey in Bollywood and his theatre days in Bengaluru. Excerpts:

Q: It was September 2010 when The Girl In Yellow Boots went to Toronto International Film Festival. How do you reflect on the decade that went by?
Seems like it was last week... Time really flies. However, it is a good feeling. I wish some things were better, but it is okay, I have no regrets and I am happy that I have no regrets. I didn’t know some things, I figured them out on the way, and today, I feel calm, composed and quite satisfied with my work and my life.

Q: Which projects do you hold dearly?
All of them. But, personally, the film that I enjoyed watching the most was A Death In The Gunj. Career-wise, there have been three films that have been advantageous. Shaitan got me noticed quite a lot, Hunterr is my most-watched film and then there is Mard Ko Dard Nahi Hota. But, otherwise, all my films are dear to me because they all have been wonderful experiences, and each one has given something back to me as well. 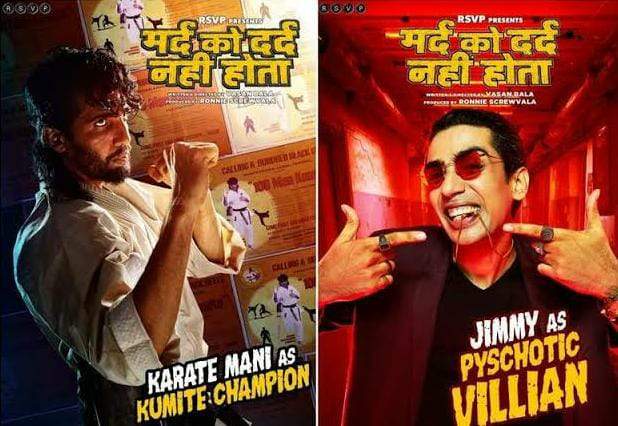 Q: The trailer of Footfairy hints at brutal murders and psychotic obsession. What’s in store?
The story revolves around a psychotic killer who calls him/herself ‘footfairy’ and a CBI officer is brought in from Delhi to Mumbai to solve this case and I play that CBI officer. The whole film is a cat and mouse chase between the CBI officer and footfairy, and it will keep the audience second-guessing. Everyone is a suspect at some point, so it is a whodunit drama as well.

Q: Take us through your theatre days in Bengaluru and Mumbai? Why don’t we see you doing theatre any more?
They were good old days. I learnt all my craft from theatre and therefore, not only do I fondly remember those days, but have a great deal of respect. I am very fortunate that I got to learn from directors and co-actors who nurtured me and gave me opportunities. I revered all the productions that I have been a part of and the people I worked with. I have indefinitely retired myself from the theatre because I don’t want to do it with a lack of interest. I love the cinema so much that I am not able to dedicate or have the same level of interest as I used to have for theatre. I don’t want to disrespect the medium. Theatre is my teacher, but cinema is my lover.

Q: Although it has been a decade, we haven't seen you in many movies. Are you picky?
I am a bit picky. I want to be as diverse as possible and there have been many times when I turned down offers that appeared similar to me. I also tend to attach to projects that give me scope to not be typecast, and rather than complaining ‘oh people are taking me only as a villain,’ I take responsibility to create my own path. I can only say no, which I do.

Q: Soon after the death of Sushant Singh Rajput, you had tweeted: As actors, somewhere deep down inside, we think we know why he did it and that's why it (is) so disturbing, even if you didn't know him at all. Take us through the difficult times from your journey?
I don’t think I have seen the depth of hell. When Sushant passed away, considering we all believed that it was a suicide then, it made us look within. We all put a lot of pressure on ourselves but cinema is a game of perception. I say this because, in reality, art and merit cannot co-exist because art is subjective and can’t be quantified. You might like my performance but someone else might not. And, this game of perceptions is also directly proportional to ambition, the more ambitious you are, the more you want to ensure that your perception out there is positive. This puts a lot of pressure - you have to go out to socialise, lead a certain lifestyle, dress up, etc. Sometimes, this pressure gets to us because you have to do it all the time and it gets tiring.

As actors, somewhere deep down inside, we think we know why he did it & that’s why it so disturbing even if you didn’t know him at all.
It’s a hard game to play and he played it very well but the game won in the end.

Q: And, how did Sushant’s death affect you personally, considering you belong to the same industry?
I didn’t know him very well so I won’t tell you that it affected me personally, but it shook me in a sense that someone who is perceived to be doing so well - I would like to do all the films that he did, at least Kai Po Che, Byomkesh Bakshi and Sonchiriya - it makes you look within... I was affected in a way that I didn’t want to be in a dark place where I make a choice to end my life (assuming it was a suicide). I re-assessed all my ambitions and aspirations and be okay with not achieving any of them.

Q: Lastly, what’s next?
I was shooting for the web series Fallen in Rajasthan with Reema Kagti when the lockdown happened. I had a great time shooting with her, Vijay Varma, Sonakshi Sinha and Sohum Shah. About two-thirds of it is left and I am hoping to resume it soon.