National Award-winning actress Kangana Ranaut claimed late on Wednesday night that she received several “secret calls” from “big stars” praising the trailer of her upcoming film Thalaivi, and named actor Akshay Kumar as one of them.

However, she said this in the context that Bollywood was “so hostile” that even praising her openly could “get them in trouble.” Kangana also took a dig at actresses Alia Bhatt and Deepika Padukone and said celebrities in the film industry could not openly praise her trailer like they did Alia’s and Deepika’s because of “movie mafia terror.”

She wrote on Twitter, “Bollywood is so hostile that even to praise me can get people in trouble, I have got many secret calls and messages even from big stars like @akshaykumar they praised @Thalaivithefilm trailer to sky but unlike Alia and Deepika films they can’t openly praise it. Movie mafia terror.” 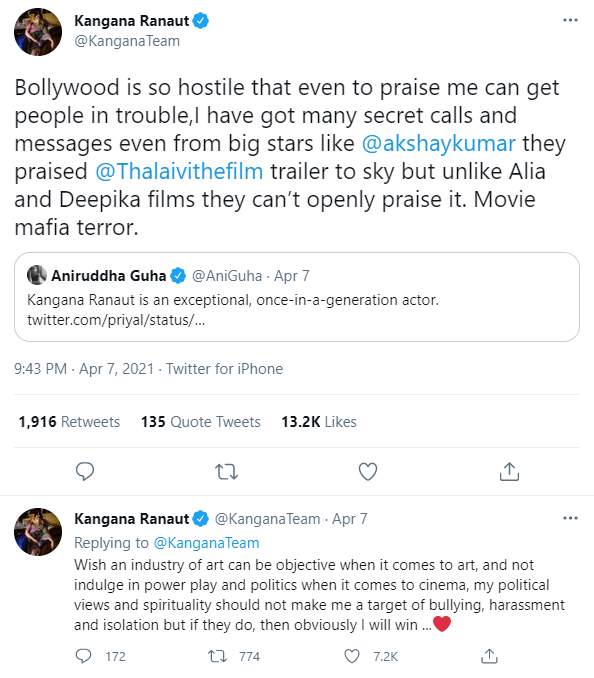 Kangana also said in a separate tweet that she wished an industry based on art did not “indulge in power play and politics”. Her tweet read, “Wish an industry of art can be objective when it comes to art, and not indulge in power play and politics when it comes to cinema, my political views and spirituality should not make me a target of bullying, harassment, and isolation but if they do, then obviously I will win.”

The Manikarnika actress had earlier hit out at Alia and Deepika for their “lack of support” with a throwback video showing her praising the two actresses. She also expressed regret over how the two of them had “never returned the favour.”

Kangana had claimed, “There is not a single actress in this industry who I have not supported or praised here is the proof, but none of them ever showed any support or praise for me, have you ever thought why? Why they gang up on me? Why this conspiracy to look through me and my work? Think hard.”

The trailer for Thalaivi, which is a biopic of late former chief minister of Tamil Nadu J Jayalalithaa, was released on Kangana’s birthday and had received lots of praise from fans and the film fraternity. The film stars Arvind Swami as MG Ramachandran, Prakash Raj as M Karunanidhi, Jisshu Sengupta as Sobhan Babu, and Bhagyashree as Jayalalithaa’s mother Sandhya.

The movie is expected to hit theatres on April 23.