Tamil actor-comedian Vivekh, who was admitted to SIMS hospital in Chennai’s Vadapalani on Friday after suffering a heart attack, has passed away. He was 59.

Sources said the actor breathed his last at 4 am on Saturday. Vivekh had complained of chest pain and fainted on Friday afternoon, following which he was rushed to the hospital. Sources said there had been 100 percent blockage in one of the arteries to his heart.

Also read: Tamil actor-comedian Vivekh, who made the audience laugh with his witty, educational humour, is no more

Condolences poured in for the actor from the Indian film fraternity after the news about his death came to light.

Prime Minister Narendra Modi express his grief and wrote on Twitter, “The untimely demise of noted actor Vivek has left many saddened. His comic timing and intelligent dialogues entertained people. Both in his films and his life, his concern for the environment and society shone through. Condolences to his family, friends and admirers. Om Shanti.”

Meanwhile, veteran actor and ‘superstar’ Rajinikanth shared an image of his statement which read, “Jr Kalaivanar, social activist, and my close friend, Vivek. His demise has caused me a lot of pain. I can never forget the time I shared with him during the making of Sivaji. My deep condolences to his family. Let his soul rest in peace.” 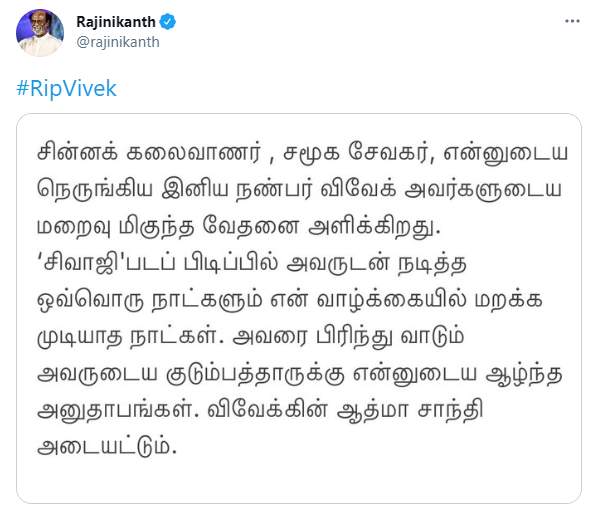 Others who shared their grief on social media include actors Arjun, Simran, Shruti Haasan, Arya, Dulquer Salmaan, Abhishek Bachchan, Varalaxmi Sarathkumar, and Tamannaah Bhatia, among others. Music directors Harris Jayaraj and Santhosh Narayanan, and director Lokesh Kanagaraj too paid tribute to the actor-comedian.

Film director and cinematographer PC Sreeram penned a small note for Vivekh and shared it. It read, “Your humor made us laugh & think. The trees you have planted made us breath better. You lived a life with commitment and now that you are no more, the work you have done will inspire generations. May your soul rest in peace.”

Actor Madhavan expressed his grief by writing: “RIP @Actor_Vivek sir. Heartbroken and stunned that you would embark on your heavenly journey so suddenly and early.The world is deprived of a truly  good man who genuinely cared for everyone and everything in it. I will so miss your laughter, wisdom and care.The heavens are lucky.” Actor Genelia Deshmukh said, “Dearest Vivek Sir, I met you when I did my first Tamil film and you were the most gracious person I have ever met… Thank You all the warmth and support you have always given so many actors like me, i will treasure my experience always.”

Veteran actor Sathyaraj’s son Sibi Sathyaraj wrote, “They say laughter is the best medicine. Thank you Dear @Actor_Vivek sir for not only entertaining us but also healing and enlightening us through your excellent work all these years.”

Music director Devi Sri Prasad posted a photo of him and wrote on Twitter, “OMG… can’t believe I woke up to this shocking news about legendary @Actor_Vivek sir. Heartbreaking… Greatest comedian of our times who always incorporated a social message into his comedy. I have always been his diehard fan. You will live in our hearts forever, dear Sir.” 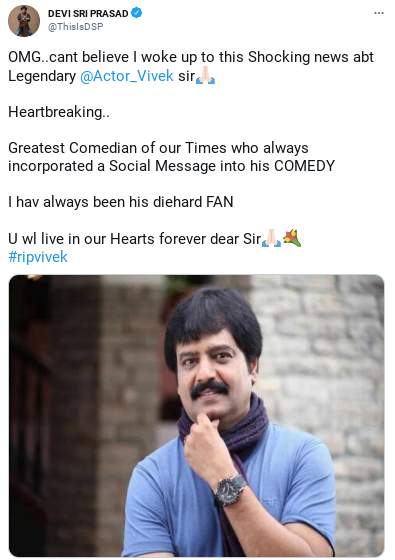