Singer Halsey has cancelled her music tour, which was originally scheduled to begin in 2020. She announced her decision on Twitter.

"Safety is the priority. I wish things were different. I love you. Dreaming of seeing your faces again," the singer tweeted. 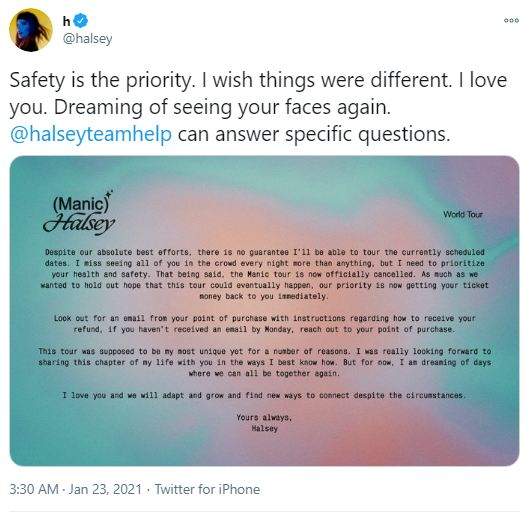 Halsey also attached a note to the tweet and said: "Despite our absolute best efforts, there is no guarantee I'll be able to tour the currently scheduled dates. I miss seeing all of you in the crowd every night more than anything, but I need to prioritise your health and safety. That being said, the Manic tour is now officially cancelled. As much as we wanted to hold out hope that this tour could eventually happen, our priority is now getting your ticket money back to you immediately."

"This tour was supposed to be my most unique yet for a number of reasons. I was really looking forward to sharing this chapter of my life with you in the ways I best know how. But for now, I am dreaming of days where we can all be together again. I love you and we will adapt and grow and find new ways to connect despite the circumstances," she added.

Halsey promised to "find new ways to connect despite the circumstances".

The Manic tour was initially planned for 17 dates in early 2020 across Europe, before the pandemic halted the proceedings after a show on March 12 in Manchester, England. She announced in May that the US dates would be pushed back to the summer of 2021.

Her rescheduled tour was initially supposed to have begun on June 1 in Washington.