Actor Shraddha Srinath was one among the numerous celebrities who congratulated the newly-wed couple, actor Varun Dhawan and fashion designer Natasha Dalal, who got married on January 24.

However, she took on a sarcastic, slightly unconventional approach to her wishes by pointing out the patriarchy that exists in the Indian film industry, particularly with regard to married female actors.

She remarked that Varun may have to stop acting in movies or switch to doing male-oriented films now that he is married since his wife and in-laws will not be 'okay with him acting with other heroines'. She also took a dig at the common accusation that working women could not balance their profession and personal life efficiently. 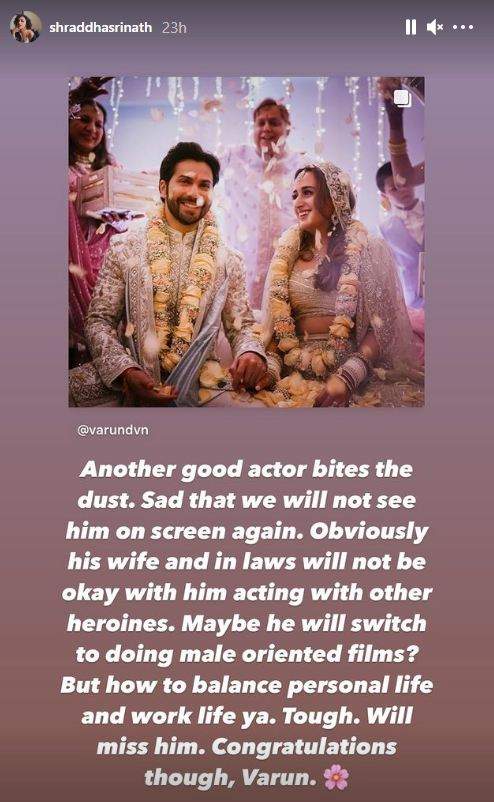 She wrote on Instagram, “Another good actor bites the dust. Sad that we will not see him on screen again. Obviously, his wife and in-laws will not be okay with him acting with other heroines. Maybe he will switch to doing male-oriented films? But how to balance personal life and work-life ya. Tough. Will miss him. Congratulations though, Varun.”

Shraddha subtly highlighted the fact that in numerous cases, female actors had to stop taking roles in movies that involved acting with other male actors after marriage due to pressure from family members.

There was also the question of “receiving consent” from the husband and in-laws to take up roles in mainstream commercial movies.

These actors would eventually opt for parallel cinema, which involved serious content in various genres (horror, mystery, drama) without the entertainment aspect of it (songs, dance).

Varun Dhawan tied the knot with Natasha Dalal at a private ceremony in Alibaug near Mumbai with a limited number of guests due to COVID-19 restrictions.