Director duo Pushkar-Gayathri in a freewheeling chat about Chennai, music in Tamil cinema and digital content

Creativity is generally thought to be a deeply personal exercise. Though cinema is a collaborative effort, this is why there’s usually only one captain of the ship: The director. In 2007, the husband-wife duo, Pushkar-Gayathri, stepped in as one among the few exceptions to this case (Krishnan-Panju is another). Pushkar-Gayathri made their directorial debut with Oram Po, followed it up with Quarter Cutting(QC) in 2010, and delivered their biggest hit last year in Vikram Vedha (VV), which they are now remaking in Hindi.  They have a simple rule to iron out any disagreements. In the words of Gayathri, “There is one golden rule. If one of us dislikes something, we don’t try to convince the other person of our choice.”  Excerpts from a conversation with the enterprising duo:

All your films are made with Chennai as the backdrop. What does the city mean to you?
Gayathri: This is our place. If we went elsewhere, we likely wouldn’t feel as strongly about belonging there. Despite its drawbacks, it’s in Chennai that we feel we truly belong.

Pushkar: This is home. In any another city, we would be outsiders.
Gayathri: Initially, in fact, we thought we were drifters, who could go anywhere, live anywhere, and work anywhere. 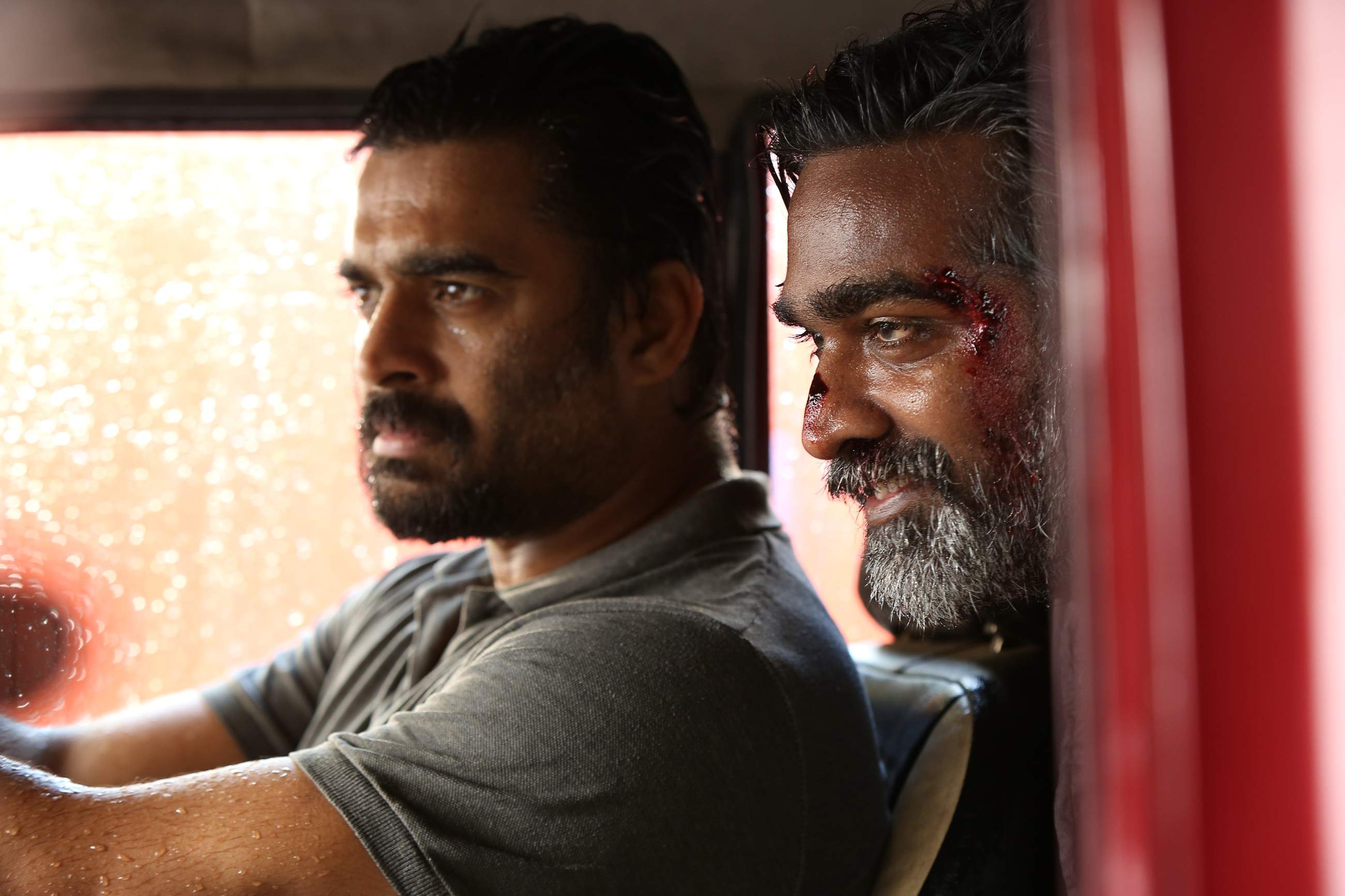 What then made Chennai your base, and the setting of your films?

P: In our film school in the US, we realised the importance of time and space in cinema. The more we were exposed to world cinema, the more we realised that the films we liked the most were ones that were rooted in a specific region.

G: You see those kinds of films and you know more about their people and their lifestyle. That’s how Chennai came to be the base for our films. This city is what we knew the best.

P: We were just talking about this yesterday. We are making films about Madras and are as intrinsic to the city as anyone else. We have a proprietary feel over Chennai and know the city as much as anybody.
G: I don’t think cinema should be very restrictive. As long as there is a voice, it is good. How important is the need for different voices in Tamil cinema?

P: Twenty years down the line, when someone does a proper critical research of Tamil cinema, they will see that this phase we are going through is just as or even more vibrant than what happened in, let’s say German Expressionism and other well-studied art movements in cinema.


Do you feel lucky that you are now in the age of digital explosion, at a time when streaming
platforms are doing well?

G: We are very interested in the digital space and have written something for it. There are certain stories that deserve long-form storytelling.
P: Theatrical releases and streaming platforms are not exactly contradictory. It is just that the kind of stories told will be segregated.
G: One thing about Tamil cinema is that if a film gets good reviews, even if it is not a big-ticket release, people still love to go to the theatre.
P: The most exciting aspect about Tamil cinema is its audience.

Is there a chance that we could see two versions of a film — one for the big screen and the other for streaming platforms?

P: Take Vada Chennai for example. It is an A-certified film that has has enough and more explicit language and still, got a major release. The concept of OTT (over the top) content is wrongly understood. That’s why there are a lot of shows
where it is about the shock value of the language used...
G: …or skin show. This is a teenage rebellion kind of phase. They have a lot of freedom in OTT; so they are creating everything they can as a knee-jerk response.

Be it a release in theatres or OTT, reviews are instant in the age of social media. How do you see this online reviewing boom?

G: It is a good thing. If the content works and if it’s a small film, word-of-mouth spreads like crazy. Of course, if it doesn’t work, then chaos ensues.
P: We have seen both sides of it. While QC released, we were trashed everywhere, and for Vikram Vedha, it was the initial responses that gave the film a big boost.
G: Actually, the first show was not house ful. But the second show started filling up because the response was so immediate.
P: Democratisation of that voice is important. We have previously complained that you can’t have just a handful of reviewers being the influencers.

Oram Po and QC had fully picturised songs, which wasn’t the case in VV. What is the future of songs in our cinema?

P: Earlier there were a lot of market constraints about adding songs in the film. Now, the market is opening up and you have songs only if it moves the narrative forward.
G: Originally, our draft of VV didn’t have songs. But we realised they could be used to expand the narrative in just a few minutes.
P: The function of music is becoming more about the BGM than about the songs. Songs will get used as purely a narrative device or as a marketing technique.

How do you decide on the kind of film you want to make?
G: While doing VV, we didn’t want to do a film only for the critics. It was a conscious decision to maintain pace. Storywise also, wherever the audience felt it was complex, they came back to the film a second or third time to understand. This connect is very important and the pitching of this film was based on it.
P: Regarding pitching, you can shift the whole story to make it a festival favourite, or you can push it to the other end and make it a commercial potboiler. These are areas we can control.
G: We decided to mount VV somewhere in the middle. It was neither completely commercial nor parallel.
P: A film like Pariyerum Perumal for example... It is an uncompromising film about what it is saying, but look at the storytelling. It is clearly designed to reach a larger audience.

As we understand, your next project will be the Hindi remake of VV?
P: The Hindi remake will go on floors first. We are not sure of the timelines yet.
G: But the cast is more or less ready, and we will be making an announcement soon.
P: As for the next Tamil film, there are actually two scripts that we have in hand that follows the format of a dramatic thriller. It is in no way structurally similar to VV, but the essence and mood of VV will be carried over.