Think of the Addams Family, and we are willing to bet that the first tune that pops in your head is the famous theme song that goes — ‘They’re creepy and they’re cooky, mysterious and spooky... The Addams Family’.

Created first by cartoonist Charles Addams in 1938, the characters of Gomez, Morticia, Wednesday, Pugsley, Uncle Fester, Lurch, Grandmama and their pet octopus Aristotle first made an appearance on cartoon strips for The New Yorker. Other popular characters included a disembodied hand, Thing (introduced in 1954) and the hairy Cousin Itt (introduced in 1964).

In the eight decades since then, the family that doesn’t seem to have aged at all has taken on plenty of different avatars — like TV shows, animated series’, musicals and on film. For the first time, a full-length animated feature film on The Addams Family, featuring the voices of Oscar Isaac, Charlize Theron, Chloë Grace Moretz, Finn Wolfhard, Allison Janney and Snoop Dogg among others, is all set to release in India, just in time for Halloween. We take a look at what went into the making of this classic, which we hear will also have a sequel, releasing in 2021. Back to basics
For co-directors Conrad Vernon and Greg Tiernan, one of the keys to making a fresh Addams Family film was to go back to the main source — Charles Addams’ shadowy line drawings that delivered a subversive pleasure — dark themes, genius chiaroscuro, and zippy one-liners. “We went back to the original cartoons to start at the beginning when he first came up with these characters,” says Vernon. “In every iteration, the Addams were already a congealed family unit. We wanted to actually start them in different places, and see how they came to be.”

With the vibe of this new film in place, the creative team set about figuring out how to adapt the original Addams-verse to the screen. “They don’t look exactly like Charles Addams’ original cartoons, but they’re very much inspired by them and they’re in the same mould, so they do have an original look for our movie,” says Tiernan. “There’s a direct line, a direct thread that goes from what we are doing all the way back to Charles Addams’ original cartoons, and it was very important for us to keep that.”

A whole new look
Production designer Patricia Atchinson was excited to develop a new animated world of The Addams Family. Atchinson, who comes from the more colourful world of kids’ television was really captivated by the new colour palette and mood she got to play with, in The Addams Family. “The whole creepy look of the film was a big draw,” she says. “My natural drawing style is kind of creepy, so it’s really cool to be able to put that into practice, being able to use dark and moody lighting and a muted colour scheme.”

She continues, “It’s really cool, as a production designer, to work closely with the directors, because you get to see the project come together on such a bigger scale. And having an opportunity to contribute to the story based on what it should look like. They’re really open to collaboration. The design team is exceptional, and I had a lot of confidence in them.” 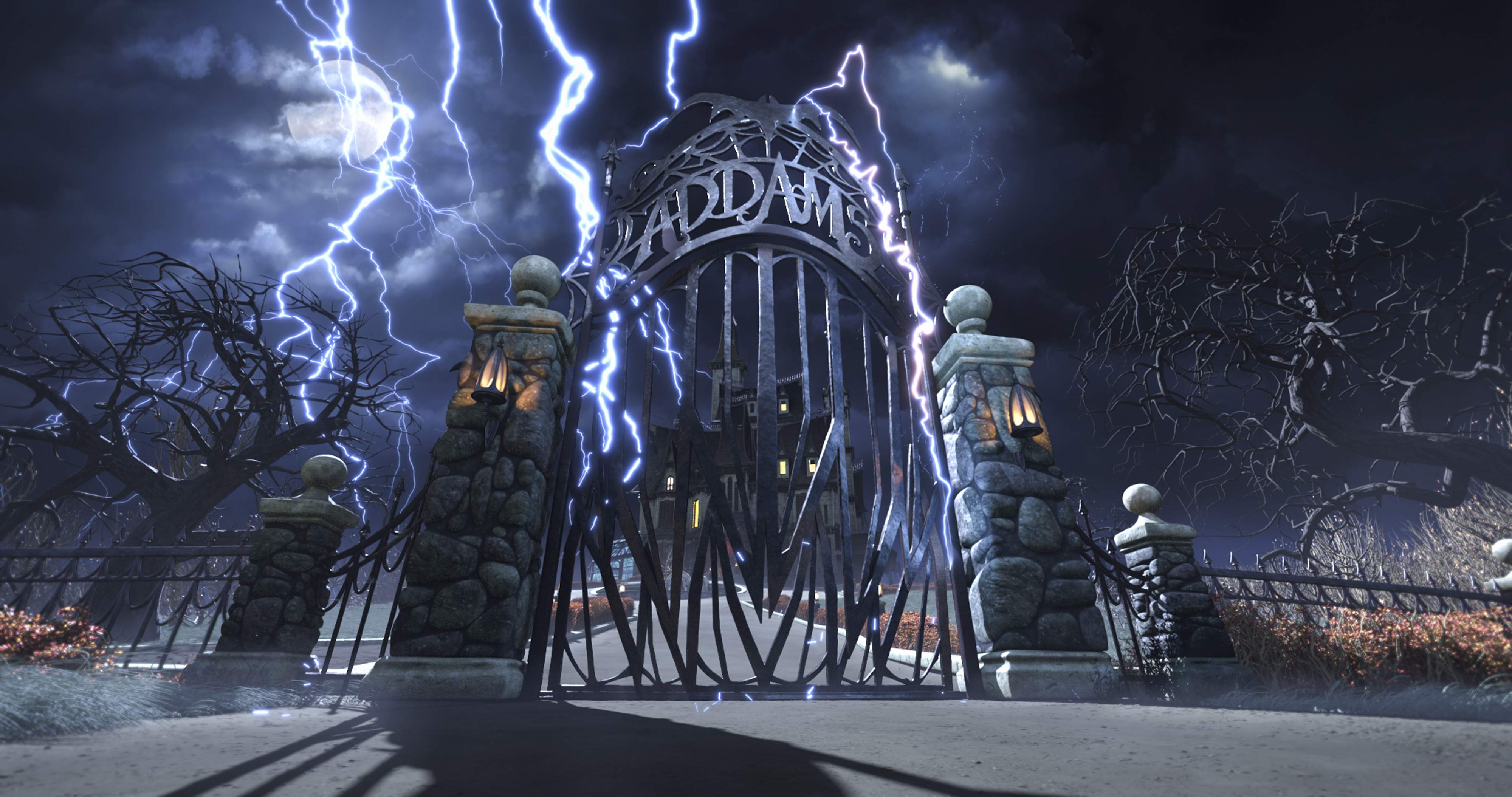 House proud
Having this film be animated afforded them a lot of opportunities that wouldn’t be possible in a live-action production. The grandeur of the set pieces was unlimited. Take the iconic Addams Family mansion, the film’s centrepiece, which incidentally, is inspired by a house in Charles Addams’ town of Westfield, New Jersey, making it devilishly funny when Gomez and Morticia realise they have found their dream home in… New Jersey.

In early meetings, the directors struggled to articulate the visual aesthetic, the delicate balance of creepy and chic. “When Patricia and the art team started designing rooms and rugs and wall treatments and couches… sometimes, they went too far into the just tattered and worn and crappy looking. And we were like, “No, no, no. These, these are beautiful pieces of furniture. They just happen to like cobwebs, so they don’t take them off. So, we called it ‘dilapidated elegance,’ because the furniture is dilapidated, but it’s still elegant and it’s beautiful in its own way.”

With this freedom, Atchinson was intent on including as many original Charles Addams details as she could. Some of his artwork decorates the walls of the mansion and a lot of visual cues are taken from his cartoons — the architecture, a paper doll from Wednesday’s bedroom, furniture and torn wallpaper. “They play a lot with sight gags in terms of explaining how the family lives, they have a very specific taste and don’t let things fall apart, but their taste is — predictably — creepy,” she says. 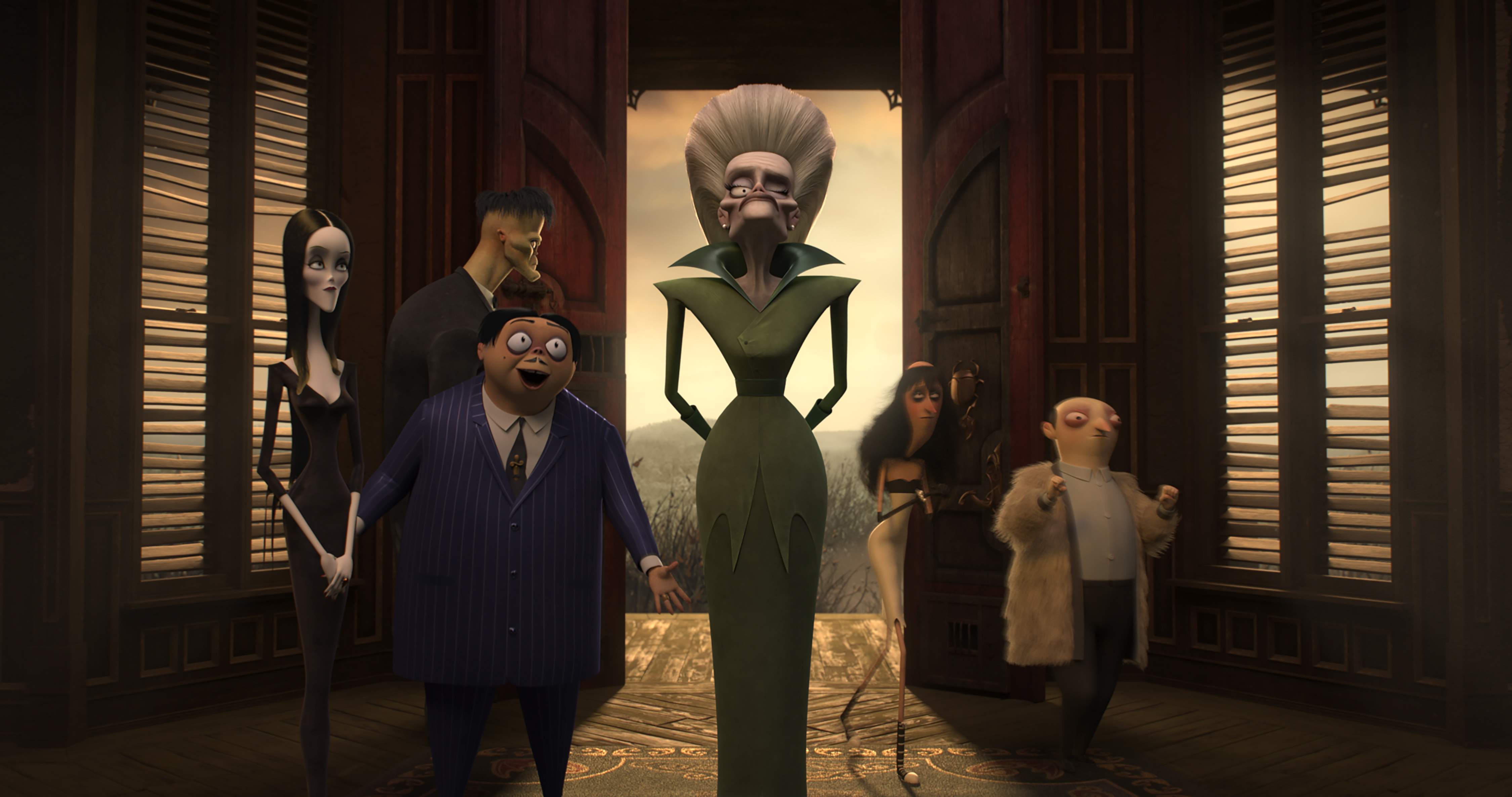 • Charles Addams based a lot of his drawings on places in the town of Westfield, New Jersey.

• Did you know Thing had a girlfriend? Carolyn Jones, who played the original Morticia in The Addams Family series also played Thing’s counterpart, Lady Fingers.

• Actresses who have played Morticia range from the original Morticia Carolyn Jones, Daryl Hannah to Liz Torres, known for her role as Miss Patti on Gilmore Girls.

• The first Addams Family animated series was a Hanna-Barbera production that only ran one season in 1973. Jodie Foster was the voice of Pugsley.

• In the 1960s, there was actually a dance called The Lurch, which started as a storyline in an Addams Family episode.

• The Addams Family musical is one of the most performed musicals in America’s high schools.

• Originally Uncle Fester was related to Morticia before he became known as Gomez’s brother in later installments of Addams Family movies.