In the fast lane: Christian Bale and Matt Damon talk about pushing all boundaries in Ford v Ferrari

There are multiple reasons to be excited about Ford v Ferrari. Coming right after Lewis Hamilton’s F1 victory this season (taking him one step closer to Michael Schumacher’s all-time record of seven titles), the movie is directed by James Mangold (the man who gave us the poignant Logan) and features, for the first time ever together, Hollywood powerhouses in their own right — Christian Bale and Matt Damon. It might be easy to say ‘Bruce Wayne meets Jason Bourne’, but the truth is that their respective careers hold much more weight than playing just the billionaire superhero and master assassin, with both having aced a wide array of other roles that have redefined the boundaries of acting, coupled with sheer hard work and unflinching determination.

This week, they add another feather in their caps with Ford v Ferrari (also called Le Mans ’66), where Damon essays the role of American automotive designer and engineer Carroll Shelby, who is tasked by Ford with designing a car that can beat the legendary Ferrari racing team of that era in the endurance race tournament called Le Mans. Bale plays racer Ken Miles, who teams up with Shelby and gets to race the Ford GT40 in the 1966 showdown with Ferrari at Le Mans. Having premiered at the Telluride Film Festival in August, the movie received positive reviews from critics, who have lauded the performances of the lead actors as well as the race sequences. Ahead of the movie’s release in India next week, we find out how Bale and Damon got into the skin of their characters, and what they learnt about the motorsport culture of yore. Excerpts:

What did you know about your respective characters before going into this film?
Bale: I knew nothing about Ken Miles, and I think I’m probably in the same boat as most people on that. He’s very much an unsung hero of motor-racing. He was a very English man, from the Midlands in Britain. Before racing, he was a military man who served in a tank unit. He was there, I think, D-Day plus two or three days after then went across Europe. He was there when they liberated Belsen. Then he became an absolute, pure, racer’s racer — very strong-minded, incredibly passionate about what he did. Within the motor-racing circuit, you hear many stories about him, about that race in ’66. They were all new to me.
Damon: Well, there had been different iterations of this project around for about 10 years, so I was familiar with the story. But it wasn’t until I read this version with this group of people, like Jim and Christian, attached, that I got really sold. So, then I really started to watch documentaries about Shelby and read about him. I also talked to a lot of people because many people knew him socially — he cut quite a figure out here in LA! And put it this way: he was described to me, by many people, as a man who could sell you anything!

Did this movie give you a newfound respect for the limits and dangers that these drivers pushed themselves to back in the ’60s?
Bale: Absolutely. These guys were sitting on bombs. Literally, the doors in these cars were full of gas — the gas tanks were right there! That was a big burning danger. And back then, there were no real ambulance crews. There were many stories, horrendous stories, of people dying on the side of the road, from incidents that would be solved in 20 seconds nowadays. The safety just wasn’t there. And back then there was also an attitude of, ‘If you’re worried about safety, you shouldn’t be a racer.’ The huge difference nowadays is that pretty much any vehicle you get into, the strongest part of the car is the brakes. Whereas at that time, that wasn’t the case at all. These cars were rocket-ships going down the Mulsanne Straight on the Le Mans track at 230mph; without good brakes, not knowing if this thing was going to stop! You know, it was like — ‘Are the brakes going to overheat and just melt?!’

One of the movie’s key themes is of ‘art vs commerce’, ‘gut instinct vs data’, which speaks as much to the movie industry as it does to the motor-racing one, right?
Bale: Oh, completely. I think this is a transferrable story to every single industry. Whenever these wonderful opportunities present themselves for me to work with people who are real masters of what they do — whether that’s in motor-racing or boxing or whatever the discipline — at that level, it really does become therapy. Once you’ve gotten through the technical aspects of the discipline, it’s all a mind-game — as is everything in life. And it’s the same with the film industry. They are very relatable industries, in terms of seeing so many talented people who never seem to get a break. And the whole marketing machine; often that’s in complete opposition to what you’re trying to do in the work. This need for selling. I think that’s not only transferrable to just the film industry but also to life in general. That’s what I hope people get from this film. It’s a tricky thing to pull people in, to put them inside of that machine, to get them to truly experience the bliss of pushing that machine to its limit. The holding it together, which is what those men did. But then, you have to make it relatable, and that’s what this movie is. While physically what these drivers are doing looks almost inhuman, inside they are the same: human, frail, with the same egos and issues that every single person deals with. When you appreciate that, then the race really starts to mean something to the spectator, beyond just a bunch of cars going at insane speeds. Then it becomes a meaningful race. And hopefully, people will agree that we’ve managed to achieve that.
Damon: Yeah, I mean, it’s just a one-to-one correlation, everywhere. So much of this movie is about these guys who are kind of eccentric gearheads getting funding from the corporate world in Dearborn Michigan, the Ford world. It’s the commerce and the creatives kind of coming together to do something. And that’s literally the world we live in — the movie business. So, there was a lot of joking around on set about that. Because there are a lot of undeniable similarities. 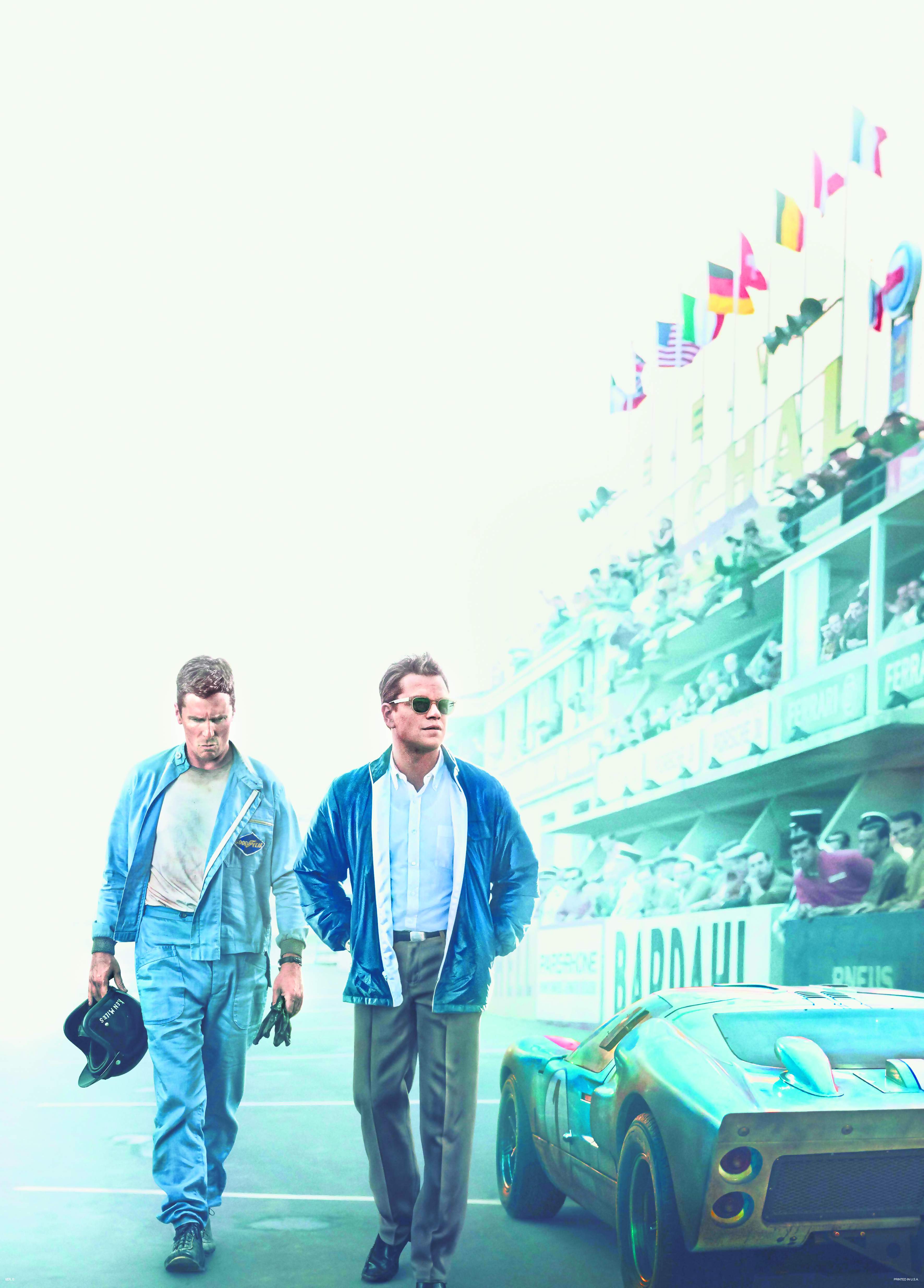 That camaraderie between Miles and Shelby is the cornerstone of the movie. How did you and Matt build that trust on screen together?
Bale: Matt is a great actor. And he’s also got such a great understanding of the cameras and the lenses. He has a totally different approach compared to mine — probably a more comprehensive and intelligent one. I think he’ll make a really good director at some point. Our approach to acting is sort of similar to the differences between our characters as well. Shelby is one hell of a racer but is more strategic and understanding of the bigger picture, versus Miles, who’s just sort of doing his thing and often burning bridges and creating scorched earth because that’s the only way he knows how to do it. This acting thing is the only thing I know how to do, though many would argue that point, whereas Matt is multi-talented.
Damon: Christian’s one of the best actors I’ve ever seen. So, in some ways, it was very easy to relate to the way that Shelby felt about Miles because Shelby felt that Miles was the best engineer and driver that he had ever seen. With Christian, there is a kind of monk-like dedication that he has to his work. For him, you didn’t need to know how hard he was working or what he was giving up or what the sacrifices were. That sums him up, really. Christian has this tremendous dedication to his work and Ken Miles was like that, too. Miles didn’t suffer fools; he was a very serious guy about what he did. Christian shares so many of those qualities. He’s a purist in many ways and very serious about what he does. In that sense, it didn’t require much acting from me at all!

Racing drivers tend to be mythical figures, don’t they? Almost impervious, superhuman. Did it surprise you how relatable they are under all the kit?
Bale: Yeah, and it’s what I liked about Miles — that he wasn’t that character. Miles wasn’t this macho, tough guy who felt the need to exude that at all. He was very emotional about all of it. He gave us great liberty [as filmmakers] because when you think of a very stoic racing driver, you think, ‘Well, how the hell can I get inside his head?’ But when you’ve got somebody like Miles, who had virtually no filter, we were able to express the love of racing through him. That’s essential. In real-life, Miles would say of motor-racing, ‘It’s not a wrestling match, it’s a ballet. It requires grace.’ There’s a great video I found of him [in real-life] talking to [American driver] Lloyd Ruby, who was a guy people described by saying he wouldn’t flinch if a mushroom cloud went off 10 feet away. Whereas Ken was spry and nimble and moving all the time and loved to talk. And [in this video], it’s Ken talking to Lloyd, saying [about the car], ‘Be gentle with her! Caress the machine! Don’t be a brute!’And Lloyd’s looking at him with an attitude that’s like, ‘Oh, God, get this Englishman out of here!’ But Ken was really expressive in that way. And people were either really drawn to it or they just couldn’t be in the same room as him. And that’s a great character to be able to portray. It’s something that the drivers told me, that this whole notion of ‘macho-ness’ — it’s going to hold people back. Because the level that these drivers are at, it’s such a delicate dance with the machine. For people who have not had the incredible pleasure to go around the track in a phenomenal car, they might feel that it’s just a matter of who can put their foot down the most and scream through it. Yes, there’s that to it. But to truly do it well, it’s a dance, like Ken says.

This movie also boasts among its ranks some of the sons of the real-life drivers who were there, back in ’66. Did you get to hang out with those guys much?
Damon: Yeah, a lot of them were hanging out in the pits. I think that for them making this was definitely a period where they were having a very special time, commiserating with their dads, being with them again in that way, you know? Just to get do that… I mean, I lost my dad 18 months ago and I can’t imagine…to get to suit up and play your dad in a movie. It seemed like those guys were really appreciating having the chance to do that. It was very special to watch.