Archana Kalpathi, creative producer of Bigil, tells us about her vision and plans to make the movie-going enjoyable & affordable

Atrip to the movies today is not as simple as just buying a ticket. It involves snacks that might need to be ordered in advance, finding a good parking spot and maybe throwing in a meal as well. Multiplexes have indeed changed the movie-watching experience. And, who better to talk about that than Archana Kalpathi, the CEO of AGS Cinemas, whose primary aim is to create a seamless movie-going experience. The 30-something enterprising young woman ventured into the film exhibition space in 2006, under the guidance of her father Kalpathi S Aghoram as well as her uncles, Kalpathi S Ganesh and Kalpathi S Suresh of AGS Entertainment, the film production house and distribution company.

Archana’s climb to the top, despite working in the family business, was not easy. Sure, she was backed by her family when she stepped into what still is a male-dominated industry (female producers and distributors are few and far between) a little over 13 years ago, but she definitely did not have everything handed to her on a platter. “When it comes to work, we are very professional, and always have been. Family equations and allowances do not get in the way,” says Archana. With the production house’s mega-budget film Bigil ready for a Diwali release, Archana, who serves as Creative Producer on the film, takes time out to talk about her journey in a field that is mostly male-dominated, a “zero work-life balance”, and what’s in store from AGS Cinemas in the near future. 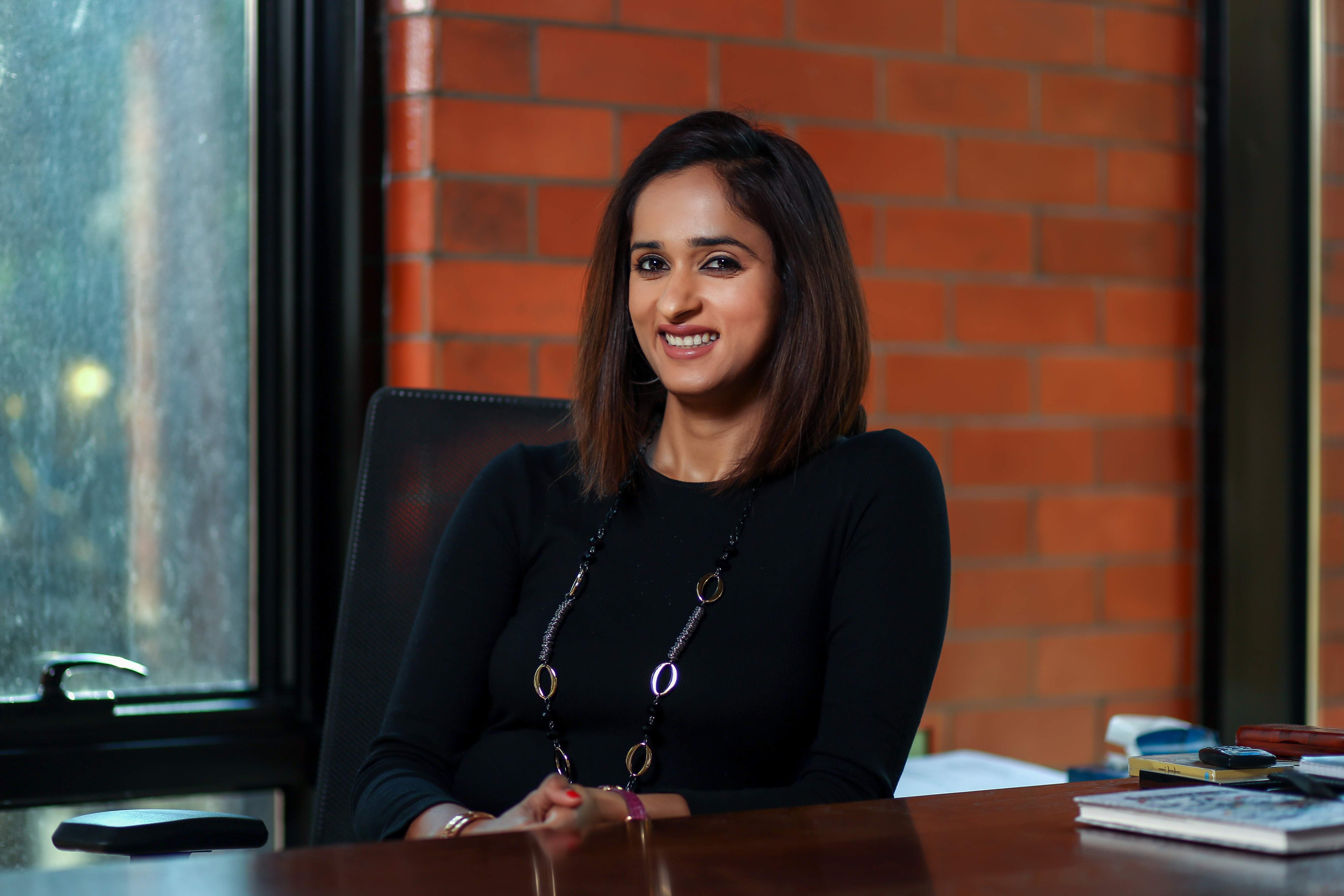 After completing an Engineering degree from Guindy Engineering College, Archana headed to the US to finish her Masters in Computer Science. “Our family comes from a software background,” says Archana. She adds, “My father and uncles were first-generation entrepreneurs. One of their earliest ventures, SSi Education and SSi Technologies (see box) largely involved software education. I was around eight years old when they started the business, and I remember being inspired by their journey. I have always wanted to join the family business, so I trained in Computer Science Engineering. A year before I was ready to come on board, the APTECH deal happened, and we’d sold the business. So by the time I came back from the US, we were cash rich, but we didn’t have a running concern. We digressed into multiple fields like real estate, entertainment, and hospitality.”

Living up to expectations
It was Archana’s passion to build things that landed her very first project — the launch of AGS Cinemas. “Like any other family, ours too was one that loved watching films together, so for me to get an opportunity to enhance the movie-watching experience for the audience was a totally different feeling,” offers Archana. Her father and uncles entrusted her with what she defines as a “small project” — revamping an old, rundown theatre in Villivakkam into a multi-plex. “I was offered this project as soon as I got back from the US and I was given 100 per cent autonomy to run it,” recalls Archana, adding that it was quite a task to take up. “I do not have a background in finance so understanding the actualities of running a business like this was new to me. I had been to a lot of multiplexes back in the States at that point of time. But, I shadowed my uncles and my father for a year before I began to oversee the construction and building of AGS Villivakkam.” 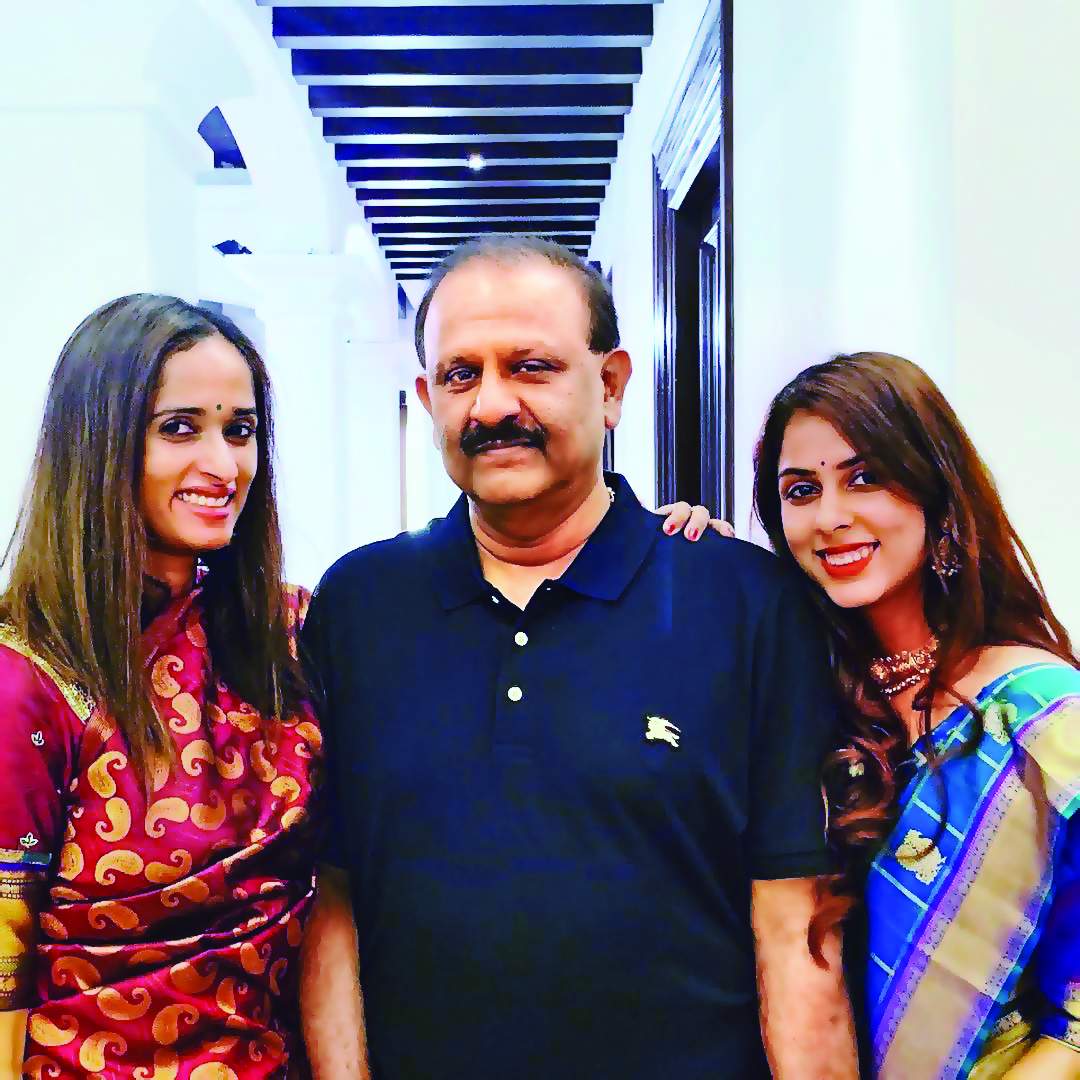 The revamp and launch of the movie theatre at Villivakkam took three painful years, she recalls, “When I started out, I was told that we needed about 14 different government approvals to get the license. I learnt the entire process in the first three years. So even though we started construction in 2007, we finished only in 2010, because it took that long. Not only is it construction, but all the approvals that come along with it. I learnt the process from scratch.” Today, AGS Cinemas has three other multiplexes — in Maduravoyal, T Nagar and Navalur.

Family ties that last
Despite the fact that she had her family backing her, Archana says that when it comes to the workplace, excuses just don’t cut it. “There is a lot of overlap between work and home. It is not like I can take the day off, and chill out. They would know exactly where to find me,” she says with a laugh. However, the pressing nature of the job still remains, she feels. “In fact, I think, it is a lot more pressure. It is also my money on the line, so accountability is far greater. At the workplace, our roles are well-defined. My father and my uncles are my investors. We have a board, and I am answerable to them. We need to ensure that we get every-one on the same page before we take up a major expansion or a major call in the business and, of course, every quarter, we go through the numbers. It is a very formal structure. It’s all very professional. I am their CEO, who runs their business for them.” Breaking into the multiplex market and offering quality services to the movie-going audience was certainly challenging (the multi-level car park at AGS Cinemas T Nagar was certainly a first for a stand-alone multiplex). Archana elaborates on the biggest ones. “Putting together a core team, and building them up from scratch was important to me. I believe this central group of people contribute most to the success of any business. I don’t have an MBA, neither do I have insights into what recruitment is like. I hired people who I synced with, in terms of thought processes and ideas. The actual running of the business is a whole different ball game — SOPs, regular audits, performance appraisals, crunching numbers every quarter — the industry was new to all of us. Back then, we only had one property, so we didn’t have too much of a workforce. Slowly, as our network grew, and the number of films we made and distributed became more and more, it got a little easier. That was when they gave me the additional responsibility of distributing films as well, and now, production. It hasn’t been easy, but I’ve enjoyed every step along the way.” 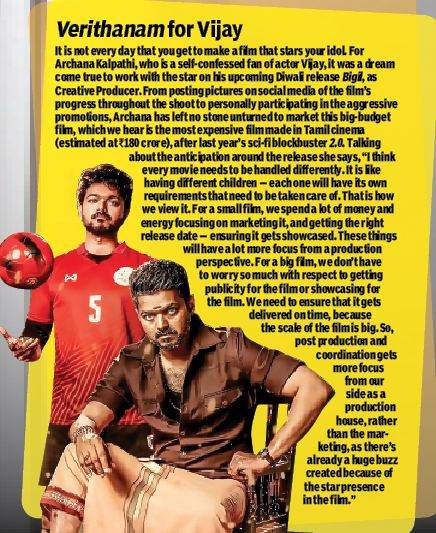 Girl power is the way to go
One cannot find too many women in the field of production, but Archana says she never felt disadvantaged because of her gender. I think I have been lucky as I come from a business family. There is a certain amount of strength that it adds to you, in terms of representing yourself with a lot of confidence. Considering the 100 per cent autonomy that my father and uncles had given me, I could take decisions without having to constantly go back and check with someone. That made a big difference in this industry, as a lot of people are so used to not having women around. It is still very much true, as I don’t see too many women in my line of work — as a peer. I have never had trouble getting people to listen to me or take orders from me,” she explains. So is it a mere coincidence that Bigil revolves on a woman-centric subject? “You could call it that,” she says with a smile.

In the next couple of years, AGS Cinemas, Archana reveals, plans to expand into Tier 2 and Tier 3 cities, and offer multiplex services in these areas. “We are looking to make cinema affordable. For a regular family, visiting a multiplex is quite an expensive affair. Currently, costs can run upto Rs 2,500 for a family of four — tickets, food and parking included. We are trying to bring it down and cap it to Rs 1,000 a family, roughly Rs 200-300 per head — all-inclusive. But right now, it’s all hands on deck for the release of Bigil,” she signs off.