Actors Mansi Joshi and Rohit Bose Roy have been married for the last 28 years and though they have worked in the same industry, they have never acted together in the same project. Finally, the two are seen as reel life couple in Locked in Love, an anthology of five short films streaming on Hungama Play. Directed by Rohit with cinematography by their 18-year-old daughter Kiara, the film talks about different shades of love and in a candid chat the Mumbai-based couple reveal their interesting dynamics while shooting in the lockdown, daughter Kiara’s natural flair for direction and more. Excerpts:

The films talk about different shades of love. Tell us more.

Rohit: We were thinking of doing something during the lockdown and realised that the currently available content deals mostly with darker themes and not much were being said about love and romance. Whether it’s films or web series they are either talking about gang war or dark thrillers. We decided to be a refreshing change. It’s a new format where two actors are enacting five different roles and all deal with the theme of love.

What is it that has kept you two locked in love for the last 28 years and which shade of love is your love?

Rohit: The marriage vows of ‘Till death do us part’ holds meaning for me. Every couple goes through a lot of trials, tribulations and stress in the marriage, but you hang on, you make it work like everything. If you can try to make your career work after so many failures than why not marriage? 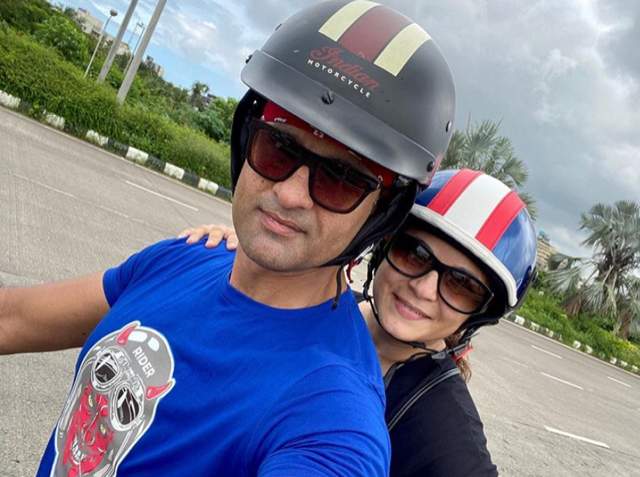 This is the first time you two are coming together in a film. How was it playing a reel life couple?

Mansi: The dynamics were very interesting. Rohit and I have never really worked together apart from sharing space in a few ad films. I am an actor who likes asking 100 questions and he is a director who doesn’t like answering too many questions. So, the dynamics were interesting, let’s leave it at that!

Rohit: In any married couple’s life, however strong the man is, ‘ghar pe to biwi ki hi chalti hai’ (the women is the boss). Suddenly Mansi realised that Rohit is calling the shots at home. How could that be. So, it was difficult for us to leave behind our home and work out of the home.

Mansi: Jokes apart I am glad I could let him direct me the way he wanted. I have enjoyed playing five different characters in his film. When the camera rolled, I forgot I was acting with my husband.

What were the challenges since it was shot during the lockdown?

Rohit: Locked in Love was supposed to be just one film but it grew into five, organically. Our first film, Pal, in the anthology, turned out to be so good that we went on exploring more. Kiara shot it so nicely that we were all surprised. In fact, we were thinking of doing ten films but then we realised it’s a mammoth task to shoot at home. The challenge was to make all five films different from each other, all characters differ from each other and make sure that the locations don’t look the same. Fortunately, we have good neighbours who helped us shoot in their home. We have our neighbour’s little daughter playing our kid in one film. The lockdown has been extremely fruitful for us.

Mansi: It was fun. Once we got into the throes of it, we enjoyed it.

This is Kiara’s first film. Does she want to be a cinematographer?

Rohit: Right from the time she has been a child we have let her make her own decisions and develop her own taste and thought process. She does come from a home with an atmosphere of art and culture. I hate talking about my daughter but she has a natural flair for visualization. She took some amazing shots. There were times when a particular frame shot by her was better than mine. If she does want to pursue the field, we would be glad.

Rohit calls you his bestie. Is it the same for you, Mansi?

Mansi: You have put me in a spot! I don’t believe in best friends but if I had to then it has to be Rohit because he knows me best.

Love for you is
Mansi: Forever
Rohit: All-encompassing

One thing that you love about each other
Rohit: Her strong sense of righteousness
Mansi: His passionate approach towards his work